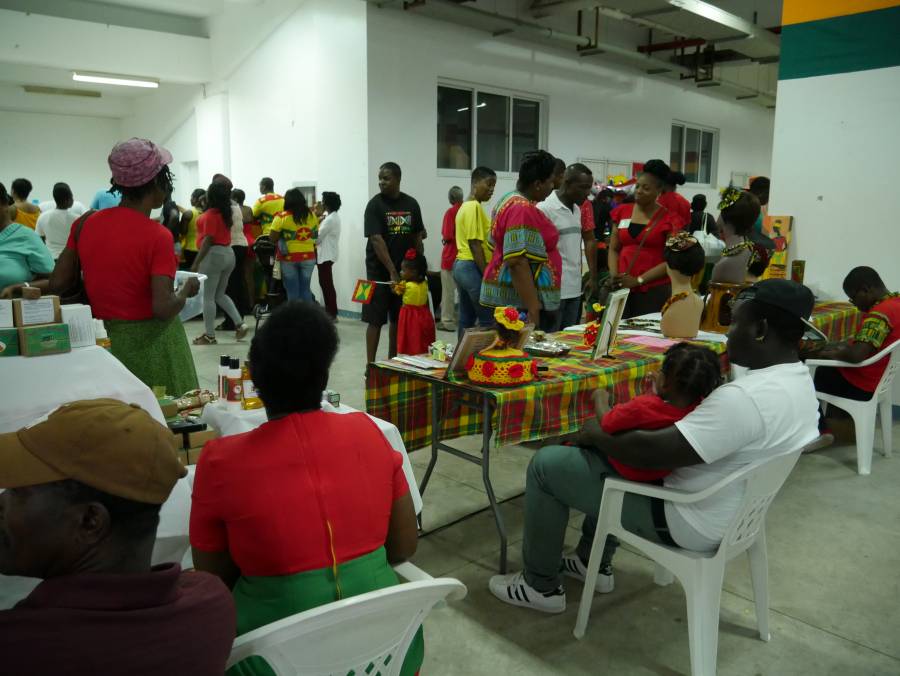 This story was posted 4 years ago
in Agriculture/Fisheries, Business, Video
3 min. read
Share

Local entrepreneurs have made it their business to capitalise on demand for patriotic apparels and locally made products around Grenada’s Independence celebrations.

Annette Sincere, a seamstress by profession who started her small business since the early 80s said she developed a love of her country from her dad, who was referred to as a ‘Gairyite.’ Every year, Sincere designs clothing for Independence and so far, sales have been good. She admires the level of patriotism shown around Independence especially from the younger generation who has started to form their own business.

“Lots of youths are trying to open their own business and it gives me great pleasure to see the young children getting into sewing, because somewhere along the line it was slowly dying out, but now you can see lots of people into it.”

The demand for customised Tshirts with striking designs bearing the national colours red, green, and gold also prove to be quite lucrative.

Stefon Cato is part owner of the clothing company IRE Clothing along with his colleague Joshua Ventour. Both were on the streets of St George’s the day before independence showcasing and selling Tshirts with their new logo designs. He said they have been in business for past 2 years.

“The Tshirt business was spawned out of us organising parties and events and creating a logo; [this] brought interest in other people about getting that same company logo and from there we started designing Independence Tshirts. This year we wanted people to not only represent their country but their own individual parish.”

Entrepreneurs also capitalised on the opportunity afforded them at this year’s Made in Grenada Expo at the National Stadium organised as part of activities to mark Grenada’s Independence.

Owner of G-links, makers of honey and fruit-based products, Garvin Glasgow, said his company has capitalised on this opportunity to promote Grenada’s honey, after Eden Apiaries at Grenville Vale Tropical Botanic Garden, received international accolades for being the best honey in the world for the second straight year, at the 84th and 85th annual UK International Honey Show in London.

G-Links for the first time introduced customers to sun-dried packaged fruits which they can sample with their locally produced honey. “There is an opportunity for people who are serious-minded and innovative to use what is available so that they can create livelihood opportunities. Now for us to have brought to market these products we had to be innovative by inventing the machine that allowed us to dry or remove excess moisture using the air just like the bees will do in their hives. We have also invented the machine to help us extract the honey from the comb using stainless steel, which would of in the past gone out [to a] Trinidad scrap yard.”

Rodney’s Beekeeping Supplies of St Andrew, as the name suggests has invested in creating quality beekeeping equipment. Owner Rodney John has expressed interest in expanding his offering as the demand for beekeeping equipment increases. “I realise there is a need for beekeeping equipment because when beekeepers need equipment, they will in the past have to purchase them from the United States, so that’s why I decided to start making them approximately one year now. The business is still a bit slow, but it is picking up because beekeepers are now shifting from ordering equipment to purchasing locally. Some of the challenges are sourcing materials like lumber which is imported and… that cost must be passed on to the consumer so that my main challenge but all in all I am happy I was able to get into this business.”

NOW Grenada is not responsible for the opinions, statements or media content presented by contributors. In case of abuse, click here to report.
Tags: curlan campbellentrepreneurexpoindependencelocalmade in grenada
Next Post

Taxes due for February 2018