This story was posted 3 years ago
in Agriculture/Fisheries, Community, Education, Environment
4 min. read 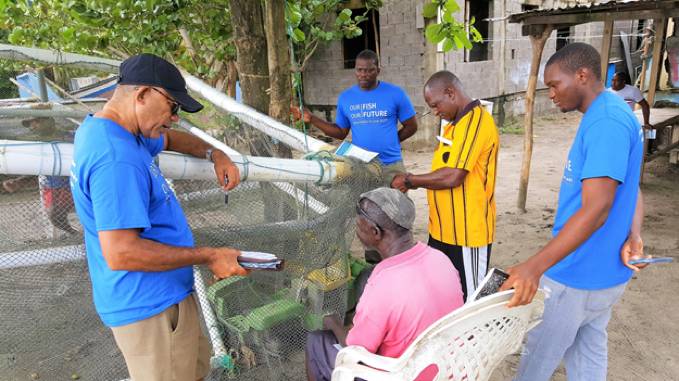 Fisherfolk in Gouyave, St John are now more than ever feeling the effects of overfishing as fish stocks have in recent times, fallen considerably.

Overfishing occurs when fish are captured at a faster rate than they can reproduce. The effects of climate change exacerbates the problem.

With this issue posing a threat to the livelihood of fisherfolk, the Grenada Community Development Agency (GRENCODA) in collaboration with the Gouyave Fishermen Cooperative Society Ltd (GFCSL) and the Fisheries Division are aggressively pursuing the establishment of a Marine Protected Area (MPA) within the parishes of St John and St Mark.

This initiative falls in line with the ambitious target set out by Small Island Developing States (SIDS) through the Caribbean Challenge Initiative to protect 20% of its near-shore marine and coastal environment by 2020.

The Caribbean Community Climate Change Centre (CCCCC) and the German Development Bank (KfW) provided funding to undertake the establishment of the St John MPA in excess of EC$1 million.

The proposed MPA will start from the White Gate area up towards Gross Point (Benago) in St Mark. There are several major components of this project including:

GRENCODA’s Programme Manager Benny Langaigne said this aggressive campaign must have total buy-in from the surrounding community for this project to be a success. “The sensitisation of climate change and the environment is important; so one of the key deliverables of the project is to conduct a community knowledge baseline survey where we identify the gaps in terms of the public knowledge, attitude, and practices pertinent to the environment so that when you are pitching our educational programs it is not done in a vacuum because you have identified where the deficiencies lie.”

Stemming from their community focus group meeting was the issue of the improper waste disposal and its adverse effects on the marine environment, Langaigne said. “Now it is not that the solid waste management authority is not doing a good job because they have certainly help to clean up the community but despite their efforts, the issue of waste disposal was found to be a common thread that was brought to light as another important issue that needs to be addressed.”

Another crucial component of the project was the fishers’ community campaign conducted by the GFCSL under the theme “Our Fish Our future – Conservation in local hands.” The campaign was geared towards sensitising the public on the important role that the MPAs play in promoting sustainable fishing, climate change adaptation, and mitigation.

GFCSL’s Public Relations Officer, Cecil Marquez who has been working in the fishing industry for over 30 years says the archaic methods of fishing has taken its toll on the environment and is now causing scarcity of certain types of pelagic species.

“In my time, I have come across a number of fishermen who thought that depletion of the fish stock was not on the table at all. Now we find stocks depleting, flying fish depleting, big jacks and yellowfin tuna depleting. We are trying to educate them along the lines that you take a little and leave enough to replenish the stocks. In fact, what we are mindful to not exploit the marine resources for the want of a few dollars more.”

Marquez says unlike other MPAs, the management of the Gouyave MPA will fall into the hands of fisherfolk rather than the government. “It’s going to be different from any other MPAs because it will be owned and controlled by the fishermen themselves they are going to be co-owners and managers. This might be the only project of its kind in the Caribbean…so we will have buy-in into the project, and when you have a project that is run by people who own the project, then you get bigger results.”

The GFCSL has also set their eyes on establishing a start of the art interpretation centre and museum which will also serve as the headquarters for the MPA unit.

Meanwhile, on Carriacou, the MPA Unit located in Tyrell Bay have their own challenges when it comes to managing the Sandy Island/Oyster Bed Marine protected area. The unit has commended fisherfolk for adhering to the rules and regulations governing the use of the MPA which they attributed to their public education and sensitisation drive, but the present developments taking place at Tyrell Bay have posed some challenges.

Manager Tracey Edwards says the MPA unit is working along with the port authority in addressing the issue of sedimentation from the ongoing construction of the Tyrell Bay Marina. “At this point, we will continue to engage them within the time frame for the completion of the project which is proposed to be in the first quarter of this year after which we expect that the construction material will be removed. In the meantime all we can do is to mitigate against the effects of sedimentation until the project is completed.”

The MPA in Carriacou is also looking at relocating their office to a more suitable location so it can better manage the Sandy Island/Oyster Bed Marine Protected Area.