This story was posted 3 years ago
in Athletics, Sports, Youth
4 min. read 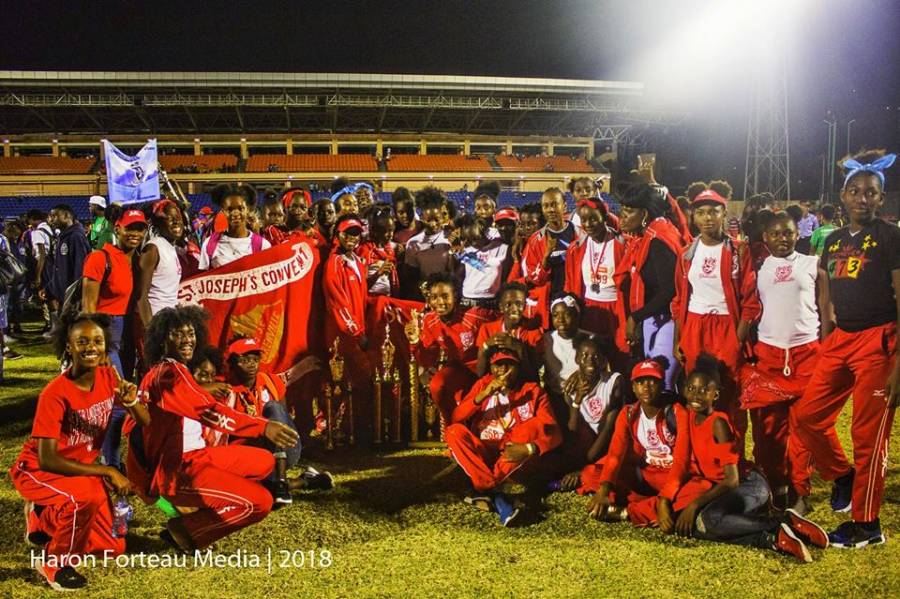 2018 Scotiabank Intercol girls’ division champion the St Joseph Convent Grenville (SJCG) described their victory as an incredible milestone for the institution. This is their first win since participating in over 53 years of the staging of the Intercol games. They defeated last year’s champions the Anglican High School who placed 2nd with 354.50 points.

The streets of Grenville came alive on Friday, 23 March as the school staged a massive motorcade around the town to celebrate their victory, joined by neighbouring schools, the St Andrew Anglican Secondary (SAASS), whose girls placed 3rd and the Grenville Secondary which placed 13th.

NOW Grenada caught up with Track and field coach Ericer Fortune who said this victory could not have come at a better time, as the school is preparing to retire a number of teachers.

“We decided that we wanted them to have something so they can retire with, some of them have been in the profession since in the early 80,’s so we decided to work hard this year to ensure that we give them that victory so that they can go home with.”

Fortune said the school would make every effort to secure another victory next year. “The athletes told me that they are tired of coming 2nd, so they are definitely going to work even harder come next year to ensure that we bring back the trophy to Grenville. The athletes themselves must be congratulated because they have worked hard to ensure that this victory came through. Some of them even competed with injuries even though the coach had decided to pull them out of the competition.”

The 2018 Scotiabank Intercol champion in the boys’ division, the Grenada Boys Secondary School (GBSS) celebrated yet another victory over their rivals the St Andrew Anglican Secondary school for the second year in a row since being dethroned in 2016.

GBSS won by 508 points leading SAASS which placed 2nd by 109 points. Placing 3rd was the Bishop College from Carriaou with 256 points.

The principal of GBSS Phillip Thomas said he was more than overjoyed over their recent victory despite the injuries. “Athletics is in our blood so we wouldn’t have just one athlete who could perform. If one athlete is injured we have another athlete that could take his place so we were quite confident going into this year’s Intercol.”

Last year a massive motorcade was staged for the boys, however, Thomas sid the school decided to have their celebration on the school’s compound, which will require fewer resources and finances. “The motorcade is good but it has to be properly managed, because as you can recognise last year several buses were hired including a truck and a DJ which cost the school a pretty penny, so that left us in the red last year. Because of this we decided that we should celebrate internally.”

Meanwhile, principal of SAASS Dianne Abel- Jeffrey is quite pleased with the performance of both their male and female athletes. The school captured 2nd place in the boys’ division and 3rd in the girls’ division, but they also placed 1st in the co-educational category.

“We have done well because we have placed in the top 3 in all the categories. As you know Intercol is all about a male category, a female category, and a co-ed category. In that co-ed category, we placed first, this is the second year that this is being promoted and we have won the challenge trophy and if we win it for another year we will get to keep that trophy. We also got complements Flow, a desktop computer.”

Abel-Jeffrey is extremely proud of the athletes. “The girls have done extremely well and have placed 3rd and we placed 2nd in the boys. They have given a good account of themselves. We did not win but we felt happy despite having a few disappointments in terms of the breakdown of athletes and injuries we never expected. Of course, we did not perform well in areas where we normally perform, but all in all we are happy overall.”

At the 2018 Scotiabank Intercol games, a total of 21 individual records were broken in both track and field events, as well as 3 relays, including the 4x400m boys open which was won by the SDCSS team who dedicated the record-setting gold medal run to the school’s late principal, Mirium Calliste, who passed away almost 3 months ago.

was Kina Thomas of BC, whose accomplishments over the 3-day meet included gold in the girls’ sub-junior long jump and 400m. She also claimed silver in the girls’ high jump, after being one of two athletes to surpass the old record in that event.