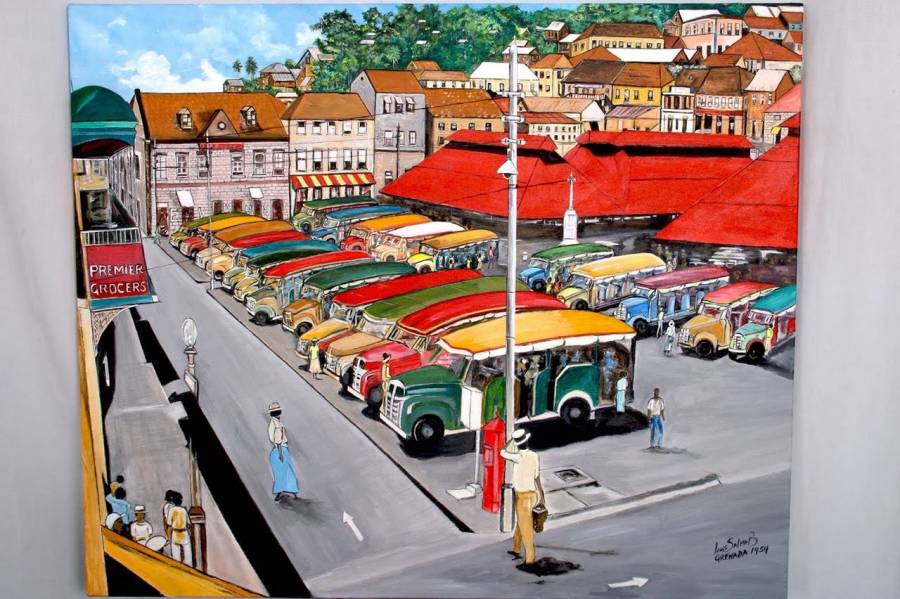 This story was posted 3 years ago
in Arts/Culture/Entertainment, Video
3 min. read
Share

Is Grenada fully harnessing the economic potential that exists within Grenada’s creative industries? Two self-taught artists residing in the Four Roads area in St George do not agree, and both are of the view that more can be done by our policymakers to tap into this emerging market.

It is widely known that most artists who are ahead of their time are not given due recognition during their lifetime. Artist Anthony Douglas was forced to shift his focus away from painting because there was no way to earn a living plying his passion for the arts.

After a 35-year hiatus, Douglas said he recently painted some of Grenada’s national heroes at the Four Roads junction for the country’s 43rd anniversary of Independence last year. “I have been doing art since in school, but after leaving school, I didn’t pursue it in any serious way. During the revolution, I started doing a little art and then I just stopped doing paintings and portraits because it was not lucrative.”

Douglas has called for the establishment of an association of artists that can help government chart the way forward for the creative industries. “I realise that our local people do not understand and appreciate the efforts of artists in Grenada, so I gave up art and started doing signs and banners, but I think there should be an establishment of a body that could manage the art industry in a bid to reach the outside market.”

Louis Salhab is another artist from Four Roads St George whose work is on the front wall of the Police Barracks on Melville Street in St George’s. The building was a holding cell for enslaved Africans. Another mural at the St George’s market square depicts how it looked decades ago.

Salhab believes if local artists can be recognised for their talent that would open up a new area of employment for young upcoming artists. “I ended up at the Richmond Hill prison where I found my inspiration for art, and after my release from prison, I felt that I had to go do what I loved the most which was my art. So, I started off doing murals all over the place, but like my colleague said we don’t get the full recognition and compensation for our artwork. But I do believe that if our artists receive the exposure and recognition, we will start to receive more for our talent.”

The 2009 UNESCO report entitled Framework for Cultural Statistics Handbook No 1 sets guidelines on how to measure and compile statistics about the economic contribution of the cultural industries.

The plight expressed by the 2 artists was brought to the attention of newly sworn-in Minister for Youth, Sports, Culture and the Arts, Hon Norland Cox. The minister agreed that more could be done to take advantage of Grenada’s creative industry including visual arts. However, he did ask to be given time to explore all of the options available, as this is one of the areas the ministry will be looking into with a view of further harnessing its potential economic impact on Grenada’s economy.

Notice of early closure Thursday, 3 May 2018