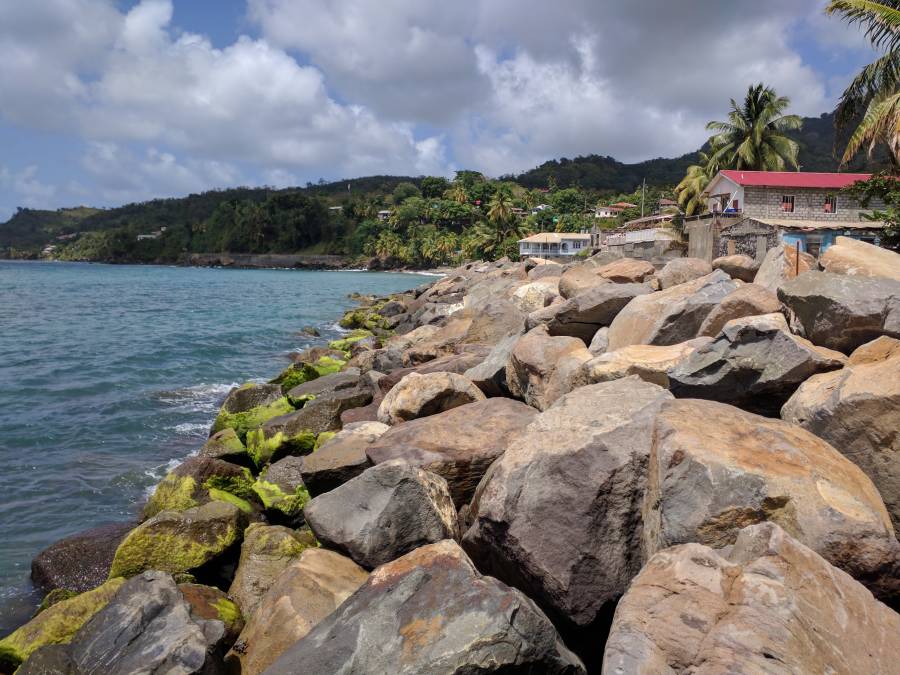 This story was posted 4 years ago
in Environment
2 min. read

The western coastline’s vulnerability to storm surges and wave action has prompted Parliamentary Representative for the constituency of St Mark, Hon Clarice Modeste-Curwen to seek funding for the 2nd phase of the St Mark Sea Defence Project, to prevent further land erosion.

Modeste-Curwen said in 2015, the adverse effect of wave action along the coast became critical after it started to pose a threat to the nearby infrastructure including the St Mark’s RC Church. “In 2015 the sea got perilously close to destroying the St Mark’s RC Church because first, it demolished the walls protecting the lands surrounding the church and there was a small portion of land that was undermined, and we knew that the church would be next if nothing was done.”

The completed first phase of the project has provided residents with additional parking space. The 2nd phase will be extended towards the mouth of the river in Victoria, St Mark. This project will cost the government between $300,000 – $400,000 to complete. The minister is hopeful that funding can be approved due to the importance of the project. “We are looking for funding while the plans are being drafted. We do not have the money as yet but there are a number of climate change projects and with the leadership role of Prime Minister Dr Keith Mitchell has taken regarding climate change issues, I feel confident we can get funding from that source.”

Because of the extended project, the minister proposes a tourism project there to bring in some revenue.

In 2014, residents alongside the river bank benefitted from the US$5 million St Mark Flood Mitigation Project completed by the China Harbour Engineering Company (CHEC). Easier access to the river was created through this project together with clearly marked swimming basins/areas for the surrounding community.