This story was posted 3 years ago
in OPINION/COMMENTARY, Politics
5 min. read

Part 1 of this 2-part commentary partially reviewed the concluding staff report of the International Monetary Fund (IMF) Structural Adjustment Programme (“the SAP”). It highlighted some of the indicators that suggest that despite the commendations that the NNP administration has been heaping upon itself, Grenada’s economy is not doing well after 3 years of sacrifice and hardship.

Indeed, the indicators suggest that we may have endured the sacrifices of the SAP, only to find ourselves right back where we started or even worse off. The report revealed that “gains” of the SAP are fragile and tenuous at best. This doesn’t surprise us in the NDC because the NNP has mastered the art of deception to the point where they convince people who are suffering serious hardship that they are in fact prospering.

The IMF report indicated that amidst growth of an average of 4%, the current account deficit increased by 3½ percentage point of GDP, “reflecting rapid import growth.” A situation where, overall growth is fuelled by increased taxation and at the same time the import bill is rapidly increasing means increased poverty for the people. That we are rapidly importing more than we are exporting also means we are exporting more money than we are bringing in from the productive sectors. That’s why the NDC in its last Manifesto pledged to enhance the productive sectors of our economy by among other things: putting idle lands to use, restructuring the MNIB to make it a truly export agency for our local produce and products, restoring our world dominance in nutmeg and cocoa production, establishing at least one agro processing plant, supporting local poultry farmers so that we produce at least 30% of poultry for local consumption, partnering with fishermen to enhance the deep sea fishing industry. It is only by increasing productivity across a range of sectors that sustainable growth can be realised. The IMF makes this point at paragraph 13 of the staff report where it says that growth in Grenada under the period of the SAP “has not been sufficiently broad-based, being underpinned mainly by construction activity and tourism”.

The report says that high unemployment and the trade deficit continue to be strong indicators that productivity and competitiveness as a country are urgent issues to be tackled. On the issue of unemployment, it says that more emphasis should be placed on upgrading education and training Programmes and tailoring them to cater for sustainable private sector job creation. In short, the IMF is saying to the NNP administration, among other things, that the IMANI Programme in its current construct is not sustainable. The NDC does not need the IMF to tell us this. That is why in our last manifesto we pledged to retain and revamp the IMANI Programme, to introduce a Guaranteed Student Loan Programme, to provide more scholarships for tertiary education, free tuition for TAMCC students and re-opening and upgrade of the Public Library. The NDC understands the crucial link between a well educated population, lower unemployment and sustained growth and productivity. So even with all the compliments in relation to the “gains” of the SAP, the NNP is not fooling the IMF.

The IMF expressed concern that a ruling against Grenada in the case brought against the government and people by Grenlec, would be a threat to the “gains” made under the SAP. In May 2017, Grenada Private Power Ltd & WRB (the companies that own majority shares in Grenlec) brought a case before the International Centre for the Settlement of Investment Disputes (“ICSID”) against Grenada. The claim is to force the government to buy back 50% of the shares in Grenlec at the base price of $176.65 million, based on government’s alleged breached the agreement with Grenlec. The NDC’s assessment of the dispute between government and Grenlec leads us to the conclusion that Grenlec has quite a strong case against government. If we lose, the bill for the people of Grenada will be in excess of $200 million. There is therefore a real likelihood that the fears of the IMF in could come true. The IMF has sound a warning to government and it will be wise for them to heed that warning in the interest of the people of Grenada. We cannot afford to allow the inflated egos of Gregory Bowen and Keith Mitchell to continue to put the entire country in economic jeopardy.

Another threat to the “gains” of the SAP that the IMF report highlights is the fragile nature of the Petro Caribe arrangement with Venezuela. Only last week, Venezuela announced that it was suspending petroleum deliveries to about half of the Caribbean countries under the Petro Caribe agreement. Grenada was not on that list, but the OECS countries of Antigua & Barbuda, Dominica, St Vincent and St Kitts & Nevis were. Things are not likely to improve in Venezuela any time soon, so we must be prepared for a similar announcement in relation to the rest us the Petro Caribe countries, including Grenada. It seems therefore that the fear expressed by the IMF about the stability of the Petro Caribe arrangement and how that can negatively impact the “gains” of the SAP will soon be realised.

Other threats to the “gains” of the SAP that the IMF staff report highlights are: “The potential implementation of new initiatives on health care and pensions, the forthcoming cycle of public wage negotiations and the availability of financing [loan and grant funds]”. These are matters that the government cannot avoid. The government must take steps now to ensure real and sustainable growth or national health insurance and pensions for public workers will continue to elude us.

The IMF report stresses that in order for Grenada to achieve continued fiscal improvement, various areas of the public sector must be strengthened and improvements in transparency would be critical. Unfortunately, based on its track record of corrupt practices and nepotism, based on the fact that it has severely damaged the public sector to the point where morale is at an all-time low and given that the country continues to operate on autopilot since 13 March 2018, the outlook for real growth under NNP looks bleak.

The NDC wants to see the government seriously put the people of Grenada first by taking steps to truly improve productivity thereby ensuring sustained growth and employment, rather than continuing with the façade that has been taking place for the last 5 years. The NNP is not fooling all Grenadians neither is it fooling the IMF and other external agencies and organisations. That is why we did not receive the amount of loan and grant funds we expected in the last fiscal year. We need now to work together as one people to build our country. Continuing to mislead the people as to our real situation will get us nowhere! 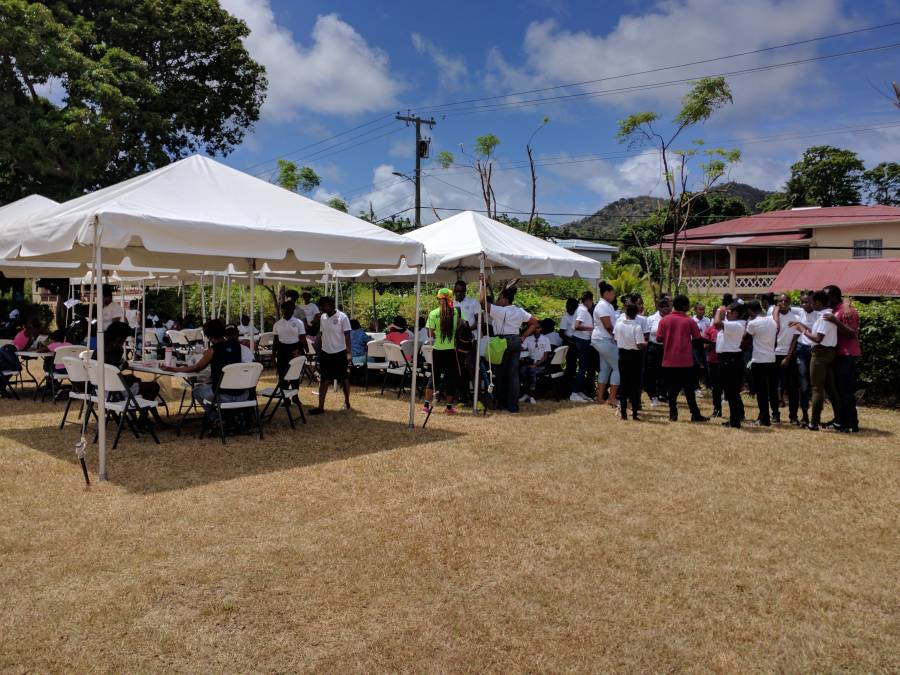