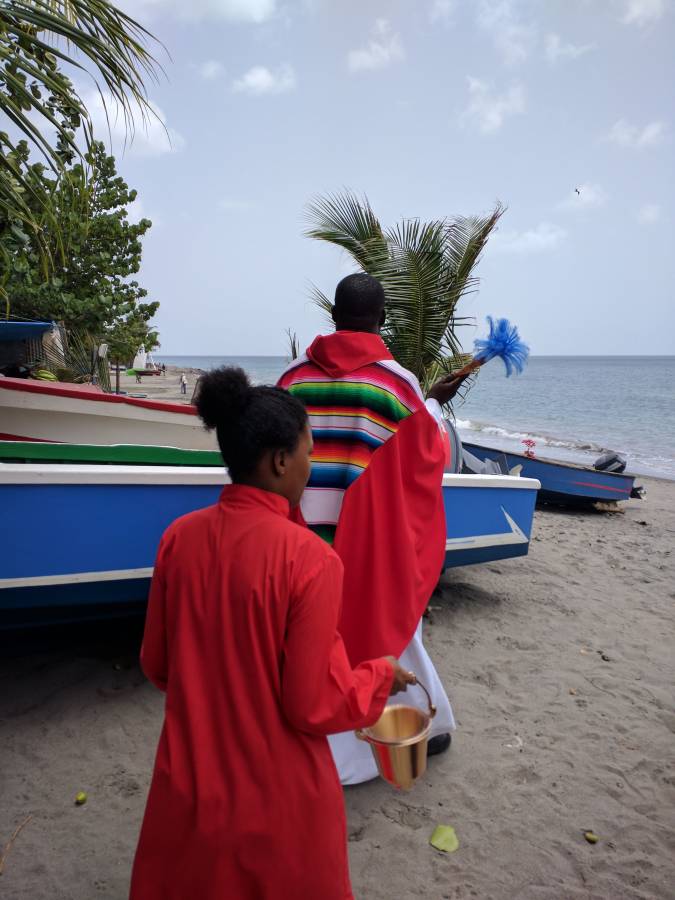 This story was posted 4 years ago
in Agriculture/Fisheries, Arts/Culture/Entertainment, Business, Community
3 min. read

Blessing of the boats, Fisherman's Birthday Celebrations in Gouyave 2018
Share

Despite describing this year’s Gouyave Fisherman’s Birthday Celebration as a success, the Gouyave Improvement Committee (GIC) has identified some areas where they have fallen short and has promised to ensure that next year’s celebrations will be better.

GIC Chairman David Hopkin says that this shortcoming was as a result of not having the type of collaboration within the community needed, as well as not having enough financing to execute the celebrations as originally planned. “Many of the activities that we have had were well executed. There was a few that could have been better but as I said before some of the challenges would have been that of more collaboration within the community and finances. You can’t do much because you don’t have enough ready cash in hand. But I am very happy about how the celebration was executed.”

The committee has received several criticisms from fisherfolk and the general public especially as it relates to the execution of the street exhibition, which is regarded as one of the prominent features of the celebrations.

Hopkin also agreed that this year’s exhibition was nowhere close to where it once was years ago. “I was not too happy with the exhibition because my expectation was that with the collaboration with the fisheries division and so on, [it] would have been better and I think moving forward maybe we have to decide another strategy to get this exhibition done, because I believe those fish exhibitions can impact on young people’s career decisions.”

A decision has been made to partner with the fisherfolk themselves next year in order to stage the street exhibition instead of relying on the fisheries division. “For next year we may not look at the fisheries division as the main stakeholder in the execution of the exhibition, but we may need to lobby with the local fishermen and start a bit early so that as they catch the different types of species of fish, we can store away as we prepare. We will even have to conduct our own research into the scientific names of those species ourselves to enhance the display because depending on them (fisheries) totally, I don’t think that this will work for us but maybe they can come onboard later on.”

NOW Grenada related the concerns expressed by the GIC to the National Marine Protected Area Coordinator Olando Harvey, who indicated that their department was not given ample time to prepare for the exhibition. “We were not given any resources for the activity. Also we were given at most 3 weeks’ notice to mobilise, when the event requires at least 3 months planning and preparation to execute.”

Fisherman and owner of fishing vessel “Give Thanks” Sean Walker, said he welcomed the resurgence of some of the boat racing competitions during the celebration but was disappointed that the Strong Man Race was not reintroduced. “A lot of long ago activities has been lost because growing up as a young boy in Gouyave I remember them having a race called the Strong Man Race, where you run with a 25 pound of sand on your back and then they used to have the greasy pole that was really exciting.”

Fisherman Junior Joseph said believes the committee can do better to improve the festival. “I believe the festival keep declining and I believe we don’t have the right set of people organising the events for 29 June.”

A budget of $140,000 was set aside by the committee to execute the birthday celebrations, and at present, the committee is reviewing its performance to ensure that it is not left in the red.

Grenadians encouraged to lobby government for legalisation of cannabis