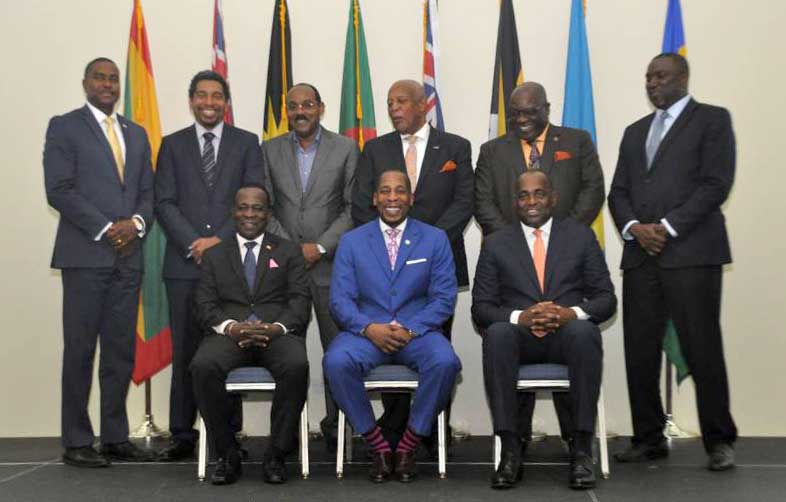 Prime Minister Dr Keith Mitchell took over the chairmanship of the Eastern Caribbean Currency Union (ECCU) promising that his tenure will be one of “implementation for transformation” as efforts are made to tackle several sub-regional issues.

Dominica’s Prime Minister Roosevelt Skerrit handed over chairmanship to Dr Mitchell on Friday during a ceremony which preceded the 91st Meeting of the Monetary Council of the Eastern Caribbean Central Bank. The meeting was held at the Radisson Grenada Beach Resort, Grand Anse, St George, Grenada.

The monetary council is the highest decision-making authority for the ECCU. It is comprised of one minister appointed by each government of the participating countries. The function of the council is to provide directives and guidelines on matters of monetary and credit policy to the bank.

Highlighting some of the issues to be pursued, Dr Mitchell said that Fiscal and Debt Resilience; Dealing with the Threat of De-risking; Addressing Bank Fees and Charges; Establishing the Credit Bureau and FinTech Regulation and Supervision are among the measures that will be taking centre stage during his time as chairman.

Providing information in fiscal and debt resilience, Dr Mitchell said that as part of building resilience in the ECCU, leaders had taken note of the bank’s strong advocacy for the enactment of fiscal resilience frameworks in member countries and the intention is to all ECCU members will enact similar legislation.

“Grenada is the first country in the ECCU to adopt fiscal responsibility legislation and establish an independent fiscal responsibility oversight committee. Therefore, we fully support this call,” he said while praising the effort by members to comply with the monetary council agreement that all member countries would table their Medium-Term Debt Management Strategies in their respective parliaments.

“It is encouraging to observe that all member countries have now completed their strategies and we look forward to them being tabled in parliament, during my tenure as chairman,” he said.

With regards to dealing with the threat of de-risking, Dr Mitchell told the ceremony that the potential loss of correspondent banking relations continues to pose a serious threat and the region must remain vigilant and relentless in its efforts to combat this existential threat.

“That said, we also understand that banks are facing rising compliance costs because of various international requirements for Anti-Money Laundering and Combating Financing of Terrorism. We call on all banks and the ECCU Bankers Association to become more proactive in informing customers of these developments and helping them access no-cost or low-cost options, wherever possible,” he told the opening ceremony whose attendees included representatives of all financial institutions.

Prensnelo: In love with Grenada