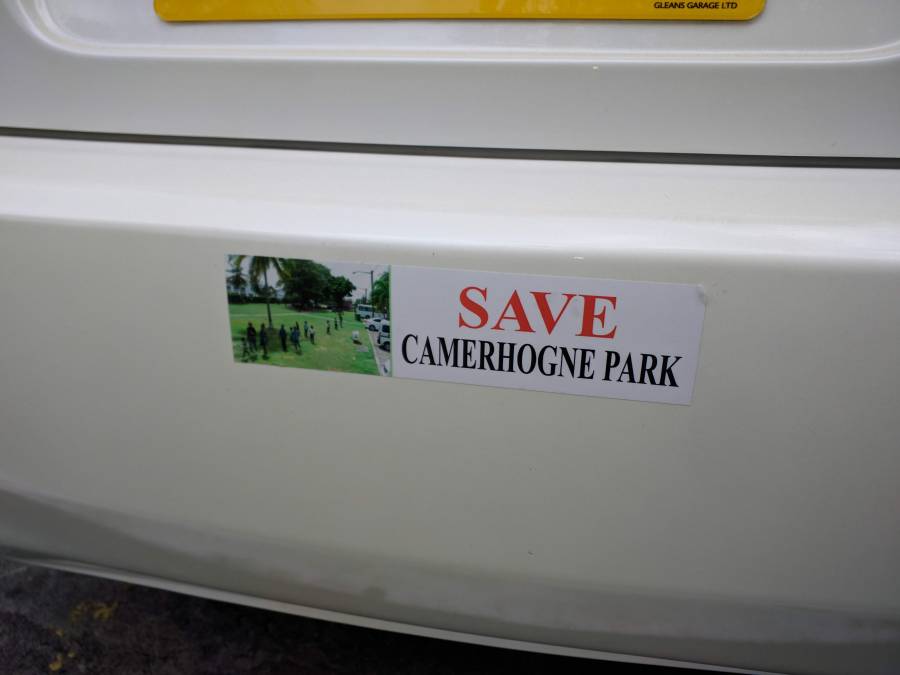 This story was posted 4 years ago
in Community, Environment, Travel/Tourism
3 min. read

Between now and the next 4 months, the committee best known for mounting the 2016 petition to Save Camerhogne Park, will embark on another campaign to keep the momentum going.

The committee has launched the Save Camerhogne Park bumper sticker campaign. With the assistance of the Willie Redhead Foundation (tWRF), at least 20,000 stickers are expected to be circulated to the motoring public to continue efforts to raise awareness of the threat to Camerhogne Park and the need to have it protected.

Chairman of the Save Camerhogne Park Committee, Jude Bernard says the ultimate goal is to restore the park back to its original state. “When we look at the rundown state of the park…the lights and benches which are in a deplorable state, some of which are not even safe for sitting because of exposed nails and things are falling apart. Therefore, we would love to restore for instance the children playing area, which is far beyond deterioration, so this is an area we have to look at.”

The committee has already met with the Ministry of Tourism to collaborate in the park’s restoration efforts but will not be able to proceed unless the committee is certain that the park is not under threat.

The government has stated on several occasions that the park is not under threat of being sold, however, the Save Camerhogne Park committee is still not convinced. “We have met, and we want to collaboratively work with the Ministry of Tourism which actually is the custodian of the park to work together to enhance the park. But before we plan to enhance we must secure it, but once we can be guaranteed in writing or in a formal way the assurance that the park is secured then we would be able to start looking at plans to work together with the ministry and other interested groups to start the enhancement work.”

Bernard said in order to stage a successful campaign the committee must raise $100,000 to print the bumper stickers. “While we will love to distribute the bumper stickers, we know that there are costs involved and we have targets to reach in terms of the things we want to embark upon because we not only looking to preserving the park, but we are also looking at enhancing it as well.”

He said with the availability of corporate sponsorship, the steering committee will be able to make available free bumper stickers to motorists. “A corporate sponsor may be able to sponsor a thousand of those stickers and distribute them freely to other people, but from the steering committee point of view I don’t see us being able to just distribute them freely without sponsorship.”

During the petition launch to save Camerhogne Park, the committee was able to raise more than 15,000 signatures from the public who were all in agreement that the park must stay in the hands of Grenadians.

NOW Grenada is not responsible for the opinions, statements or media content presented by contributors. In case of abuse, click here to report.
Tags: bumper stickercamerhogne parkcurlan campbelljude bernardministry of tourismwillie redhead foundation
Next Post