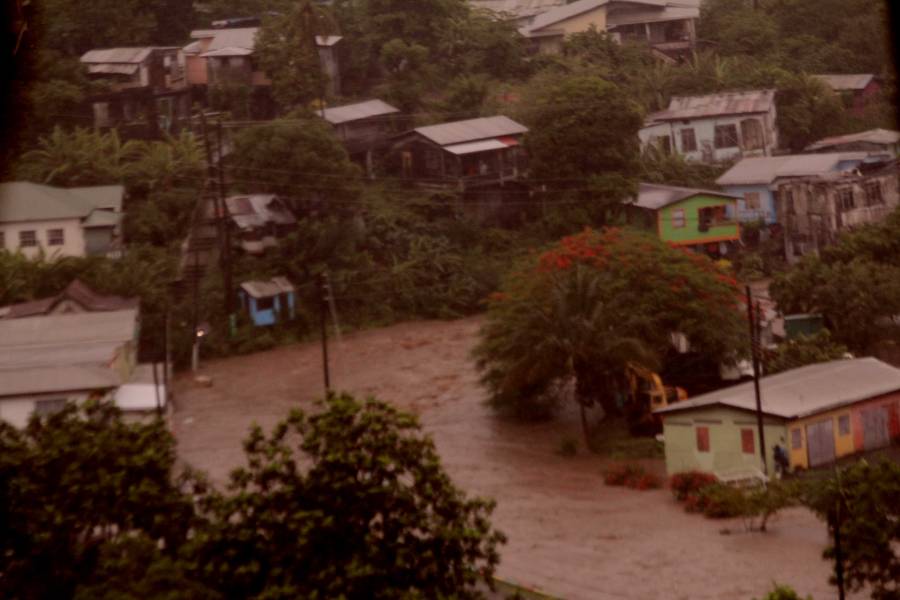 This story was posted 4 years ago
in Environment, OPINION/COMMENTARY, Weather
5 min. read

I was shocked and dismayed when I saw a video of the flooding that took place in Grenada on 1 August 2018 especially in the River Road area of St George’s. It did bring back memories of flooding I witnessed in similar areas of the capital earlier this year however, this time it appeared to be different in terms of the density of combined Surface [water] Run Off (SRO) and river water that caught everyone by surprise.

The incident that occurred on the 1 August should serve as a grave warning to national government. This was not just flash flooding; it clearly identified the area of River Road which is a low/flat land area surrounded by hills as vulnerable and therefore part of the floodplain. Such an area should be mapped in this regard to gain international support for what will be a costly long-term Flood Alleviation Scheme (FAS) programme involving high-quality civil engineering to reduce the risk of flooding to about 1 in 200, and at the same time enhance and upgrade that part of town if safe pedestrian walkways are included.

A lot has been said and written about climate change and the effect it is likely to have on small Caribbean islands such as Grenada, so I will not go there or attempt to come up with suggestions of solutions. I will leave that to the experts and politicians in major developed countries to help us in every which way to protect our coastline and use the power of our surrounding seas to generate electrical energy to help reduce the use of fossil fuels.

River Road lived up to its name when the St John’s River burst its banks, and the road became submerged forming part of the river. Substantial flooding to properties occurred and people living in what now should be mapped as a floodplain will be forever at risk of having their property flooded whenever there is torrential rain in the area and/or areas of St George where Surface [water] Run Off (SRO) and upstream rivers are fed into the St John’s River. Also, the fact that the mouth of the river is close by, consideration must be given to tidal waves entering the river from the sea and moving upstream from time to time.

The immediate aftermath is the cleanup operations and support in whatever form the government can offer to those households directly affected, however, the short-term and long-term solutions as stated briefly earlier would be expensive, and the government will need to seek international financial and technical support.

The short-term should see dredging and the undertaking removal of accumulated silt from the upstream sides and debris from the St John’s River. In addition, measures such as the use of felled trees could be used on land in open spaces to slow down the flow rate of Surface [water] Run Off (SRO) from entering the river. Such measures are used by Internal Drainage Boards (IDBs) in the UK – trees are felled, and their logs are staked to the ground to reduce the flow rate of SRO to rivers.

The long-term solution is the Flood Alleviation Scheme (FAS) in the River Road area of the St John’s River and for this, the government will need expert advice from abroad to come up with a scheme that is workable and sustainable. This is where our Prime Minister and his Foreign Minister should get stuck in by acting quickly, if they have not already done so.

The government should either get in touch with the Dutch Government or/and the British Government. History tells us that the Dutch are the best in the world when it comes to Flood Alleviation Schemes, and I know from experience that in Britain from time to time the UK Environment Agency (EA) take lessons learnt from the Dutch experience and put them into practice on rivers and coastal projects.

With our British history and the links we have as a member of the Commonwealth, Grenada should also approach the British Government for technical and financial support.

An initial Strategic Flood Risk Assessment (SFRA) and a Strategic Environmental Assessment (SEA) will have to be carried out before plans for the project are unfolded.

The project should include the widening and deepening of the St John’s River most likely by building walls on either side of the river bank at a substantial height. It should include pedestrian walkways with street lighting facilities. Floodgates/barriers should be fitted either side of the stadium bridge that links the stadium to River Road. These gates/barriers should be designed to close off the bridge at the possibility of flooding to protect those properties on River Road and the stadium area from the risk of flooding.

Sustainable Drainage Systems (SUDs) may also be considered to be installed in the area of the stadium, in perhaps the playing fields of the local school to hold back Surface water Run Off coming downhill from the Gravel Road area. This would mean that the grounds are designed basically to be flooded during rainstorms and the water retained only to be released into the river once the river water falls below a certain level.

Naturally, such a system has to be monitored and managed during torrential rainstorms. Also, the grounds will not be usable as a playing field during those periods. The argument here has to be – do we want our properties to be flooded or do we want them to be protected from flooding or the risk of flooding?

The mapping of historical flooding areas of the country, as well as new ones,  should be promoted by government. These areas should be monitored for flash flooding whenever we experience heavy rain. Rain gauge meters could be installed in specific areas to be used as monitors for recording flood incidents; in this way allowing for government Flood Alleviation Schemes (FAS) over a period of time to get the necessary funds needed for projects that would reduce the risk of flooding and protect properties.