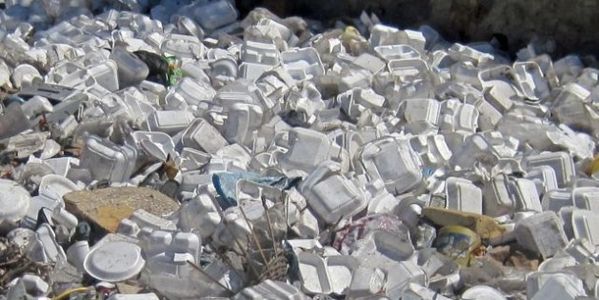 The introduction of “environmentally friendly” biodegradable products particularly those used as food containers, may be a progressive move towards reducing the negative environmental impacts caused by polystyrene foam commonly referred to as Styrofoam. However, the alternative may not be an easier option to implement nor it is proven to be that much safer for the environment, said Managing Director of Fortune Foods Limited, Ajay Mahbubani.

In 2017, plastic accounted for 12% – 16% of garbage dumped at the Perseverance landfill, quite a high volume considering the light weight of plastic and plastic products.

Government took the bold step in implementing a ban on the importation of Styrofoam as of 1 September 2018, which will then be followed by a ban on the sale of Styrofoam in March 2019, and a ban on the sale of food in Styrofoam containers the following month. But the alternative to be introduced may pose some challenges to both importers and consumers said Mahbubani, who represented the private sector on the Waste Management Task Force established to introduce the ban.

Mahbubani said although he welcomes the ban, there are some challenges that must be taken into consideration when introducing biodegradable food and beverage containers. He explained that from experience, biodegradable food and beverage containers break down in both hot and cold temperatures, therefore, making the shipment of these products risky from a financial standpoint.

“The most difficult substitute for Styrofoam is the trays for supermarket use, because there have been supermarkets that have sold the paper substitute and they indicated that it disintegrates in a cooler temperature where there is condensation. So we have been given a temporary waiver where we are allowed to bring in foam trays because of the demand. We have been given a waiver in order to do more research to find a substitute. Next week we should get one of the suppliers who will provide a substitute, and I will be giving it to the supermarkets to try out.”

Another issue also stems from the distance and length of time it takes for shipment of biodegradable papers material to get to Grenada from manufacturers, making the transaction between suppliers and importers quite difficult.

“A supplier told me that they could not quote me a price for the shipment of biodegradable food containers because the transit time from their warehouse to Grenada will take a few weeks. He said the heat in the container when it is closed plus moisture will cause these biodegradable products to begin degrading instantly. He continued by saying that he was told by the supplier that “Why I would take your money in advance and sell you a product that by the time it reaches you, you have to go to landfill and get rid of it.”

From a personal standpoint, Mahbubani raised another concern that is yet to be addressed. “We can just imagine when these containers are decomposing some form of gas must be emitted that can be harmful to humans. Now it is food safe in the sense that in larger countries where these containers are produced, they have what we call “just in time inventory” where it is made today and by tomorrow it is out on the roads and consumed within a week and these countries don’t have the humidity that we have. But when you have to transport it and we have to buy container quantity which will last months, what will be the effect of it? Not only the fact that we will lose our money, but it is risky to the consumer.”

Upon hearing the concerns expressed by Mahbubani, online research conducted to see if biodegradable products may pose some risk to the environment like its cheaper counterpart Styrofoam, unearthed a research paper by Dr Morton Barlaz, head of North Carolina State Department of Civil, Construction, and Environmental Engineering. His research made the case that landfills need to expand methane collection and design biodegradable products to degrade at a slower pace which he says is more environmentally friendly.

But it is important to note that this is in contrast to the US Federal Trade Commission guidance on the issue in 2015. It forbade the term “biodegradable” from appearing on any product unless that product is shown to completely break down into elements in nature within 5 years after customary disposal.

Mahbubani lamented that the same countries that promoted Styrofoam to be a safer and convenient way of serving food to consumers are now releasing information on the harmful effects. Therefore, it can mean that the same may occur in the future with regards to biodegradable products based on previous trends. “Each company that makes these products are promoting themselves but there is no independent company doing research and saying while it is degrading, this is the hazard to the human body because of it…it was the same with Styrofoam when it was first introduced.”

Despite this, Mahbubani anticipates the total ban on Styrofoam and said his company has already begun ordering 40ft containers of biodegradable products. However, he did address the concern of the low cost of Styrofoam versus the slightly higher cost of biodegradable products. “As the entire world in transitioning into making paper boxes, these companies we are in negotiation with are actually manufacturing these products on a 24-hour cycle. Now when they do that, and there is such a huge supply, they will not be in a position to store them so they will get rid of it immediately, so the price will come down eventually.”

Regarding the government allotted timeline for the complete ban on Styrofoam, Mahbubani believes more time is needed for companies to adjust and has welcomed government commitment to continued dialogue on the issue.

These and several other issues will be brought on the table when the Waste Management Task Force, headed by Minister for Climate Resilience and the Environment Minister, Simon Stiell, meets later this month.

NOW Grenada is not responsible for the opinions, statements or media content presented by contributors. In case of abuse, click here to report.
Tags: ajay mahbubanibiodegradablecurlan campbellfederal trade commissionpolystyrene foamstyrofoam
Next Post