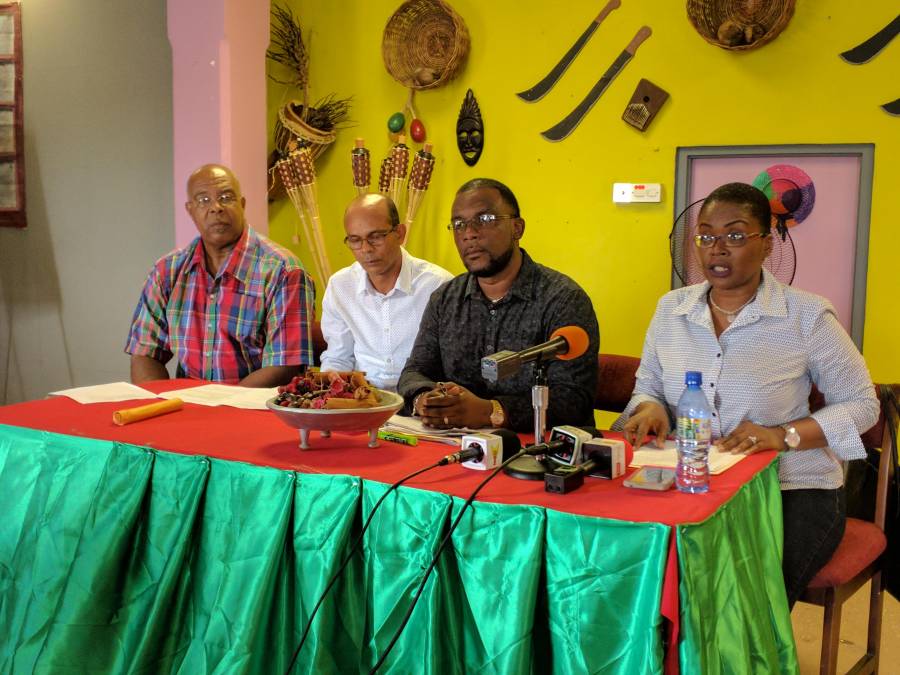 This story was posted 3 years ago
in Arts/Culture/Entertainment, Business
5 min. read

After what was a successful hosting of Junior & Senior Panorama 2018, following its postponement the previous year, internal conflicts within the Grenada Steelband Association (GSA) have surfaced.

A major scandal to hit the airwaves was news that former GSA President, David ‘Peck’ Edwards, is currently under investigation by the Financial Intelligence Unit (FIU) for misappropriation of funds. While that matter is ongoing, another threat seeks to undermine the association.

During the GSA’s annual general meeting on Saturday, 22 September 2018, a no-confidence motion was put forward by Andre Greenidge of FLOW Comancheros against the association’s current president, Jason Skeete.

That motion received support by 3 other members of the association including Edwards, resulting in Skeete opting to step down.

A release issued by Lisa Chase, Operations Manager of Coyaba New Dimensions Steel Orchestra (NDSO), condemned the move and has deemed it unconstitutional. The release also indicated that out of the 9 bands present at the meeting at the National Stadium, only 4 voted in favour of the motion while 3 voted against. Two bands, including NDSO did not participate in the voting, as well as the 6 executive members present.

However, what can be described as a change of heart, Skeete is not giving up his position without a fight. On Monday, an emergency press conference was held by Skeete, Vice President Victor Phillip, Public Relations Officer Brian Campbell, and Lisa Chase. They informed the media that the current executive is still active and is led by its president, Jason Skeete.

Skeete said the disgruntled members of the association made some grave errors by not acting in accordance with the constitution, enacted and adopted by the association’s membership on the day he was elected into office.

He said one of the errors made was the manner in which the motion was put forward. “In this agenda what happens in law is that if you have a motion to be moved at an AGM, that motion must be submitted prior to the AGM and then it must be included in the agenda and given out to the members so that they can have sufficient time to peruse that motion. What happened on Saturday was a clear infringement of the constitution.”

Skeete added, “Additionally our constitution does not speak in any way at all about the removal of the president. What the constitution says is that voting must take place at the biannual convention which is set for no later than the last Saturday in September 2019 because the constitution also says that the term of office of the executive committee shall be 2 years and in addition to that it also says that should perhaps anything of that nature arise, that any decision on any motion must have two-thirds majority, and none of those things was followed on Saturday.”

Chase said the grievances expressed by the disgruntled members were based on personal feelings towards the president and had nothing to do with his leadership, which the association is pleased with.

“We sought legal advice and looked deep into the constitution and then realised that what happened on Saturday was totally against the guidelines of the association. It is our view that the clique is not seeking the interest of pan, but their own interest. This executive has been in place for less than a year and we can definitely say that we have seen the move towards improvement in the art form. If you can recall, Panorama 2018 had the best turnout in recent years so if that is not improvement then I don’t know what is.”

Chase has called for a speedy resolution to this matter. “We are hoping from here that the situation can be resolved amicably. However in our release we have said if the members of that clique are not willing to amicably cease and desist from their current action, then as an organisation we would be taking it further, but I cannot divulge at this moment what that action entails.”

The disgruntled members are now been given until the end of next week to rethink their position or face repercussions. Skeete indicated that the current executive has to meet and decide whether to convene a meeting with the disgruntled members with the hope that a resolution can be found. However, he did indicate that at that meeting, security precautions would be taken.

Article 4 of the constitution of the GSA provides for a 2-year term for the executive but there is no provision under the constitution for the removal of the President or any other officer.

Article 9 of the constitution provides a mechanism for changes to it. Amendments may be considered at an annual general meeting. At least 6 bands must support an amendment, however, no amendment was proposed at the meeting on Saturday.

Contacted via telephone for a comment, Greendige denied to be interviewed on this subject. However, he did speak on Saturday following the conclusion of the AGM.

“We didn’t vote out the executive. We only voted for the no confidence in Jason Skeete and the other executive resigned. From here we have to put in place an interim committee and we take it from there to organise an election.”

Greenidge who admitted to voting for Skeete at the last elections, informed the media on Saturday of his agreement with the motion put forward.