This story was posted 2 years ago
in Community, Education, Youth
3 min. read 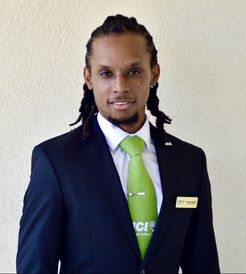 Newly elected 2019 National President of the Junior Chamber International (JCI) West Indies Khaleid Holder has outlined his mandate for the governance of the Grenada chapter.

Holder from Barbados was elected during the organisation’s 58th national convention held in Grenada from 10-14 October 2018 at the Grenadian by Rex Resort. Officers elected include Executive Vice-President Charlene Corbin, Vice-President Dorothy Peters-Nicholls and Brettney Romeo.

Holder says the local chapter must focus on projects that seek to curb the number of house fires, especially in rural communities, and the number of vehicular accidents and fatalities. He said this had been observed as two issues facing communities. “There are two potential projects that the organisation is planning on implementing. One will entail going into schools and conducting educational campaigns with students helping them understand the importance of road safety. The second project is to partner with other organisations to develop programmes and initiatives to help address the prevalence of fires and how can people secure their homes.”

JCI has been in the West Indies for over 50 years, beginning in 1949 in Trinidad and Tobago. The non-profit consists of mainly young people age 18 to 40 who are interested in bringing about change in their respective communities by offering solutions to help solve some challenges facing the region.

Simon said the local chapter continues to play its part as they seek to establish the JCI in Grenada. “This is basically our tenth month as a resurrected and re-affiliated chapter of JCI West Indies. So far we have begun some community projects. We have adopted the Belair home, we have started providing foods to homeless and we have been running social media campaigns to recruit members.”

JCI West Indies delegates were also supportive of this year’s Walk for the Cure for Breast Cancer held on Saturday 13 October organised by the CIBC FirstCaribbean Bank with the Pink Ribbon Society.

Holder said the organisation would play its part by sensitising the public of the need to have early detection of breast cancer to reduce the number of deaths associated with this disease. “Last week I supported the CIBC FirstCaribbean International Bank cancer walk in Barbados, and now I am happy to be here in Grenada, and I think we all know someone who has been touched by cancer or has experience some bouts of it. I think supporting these events really shows our commitment to raising awareness and continue our engagement as we work with other NGOs, private sector organisations and civil society to really raise awareness. So our main goal here was to push for the awareness, but through our own initiatives that we are expected to undertake as a regional organisation.”