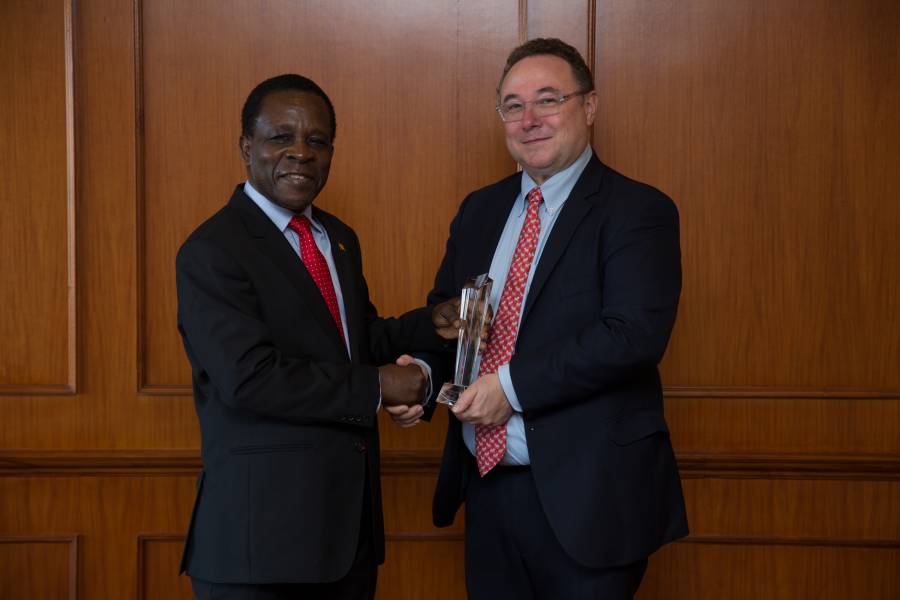 This story was posted 3 years ago
in Business, Politics
4 min. read

Prime Minister and Minister of Finance, Dr the Right Honourable Keith Mitchell has received international recognition as Finance Minister of the Year for the Caribbean. The award, from Global Markets, was presented as part of activities during the just concluded annual meetings of the World Bank and International Monetary Fund in Bali, Indonesia.

In a letter to the Prime Minister announcing his selection for the award, Chairman of the GlobalMarkets Editorial Committee said, “Grenada’s economic progress under your stewardship in the past half-decade has been highly impressive. But for the country to have continued to improve its fiscal position and GDP growth since the IMF programme was successfully completed in 2017 was of particular note to economists and analysts. The turnaround story — involving rapid debt reduction, better administration of revenues, and fiscal surpluses among other achievements — has owed much to your leadership.”

Prime Minister Mitchell said he is elated and humbled to receive this award and dedicated it to all of Grenada, Carriacou and Petite Martinique.“This is a very significant honour for Grenada as a whole and I am humbled by the receipt of this award on behalf of the country. I see this as an award for all the people of Grenada, Carriacou and Petite Martinique. Without their support for the Government’s initiatives and making the sacrifices that were necessary in 2013 when we initiated the Structural Adjustment Programme, we would not have had this award today.”

Dr Mitchell said the award is clearly based on the performance of the country and the fact that Grenada has reached a level of economic success that is now the envy of a lot of countries, regionally and internationally.

Dr Mitchell also recognised the role of the social partners including non-governmental organisations, and the religious community who helped to make the country’s economic turnaround possible. “I want to give credit to our social partners, trade union leadership and all workers in the country. I also give my appreciation to the leadership of the business community and the business community in general because they all had to make the sacrifices, in terms of increased taxes at that particular time, to reach where we are today,” he said.

The Prime Minister used the opportunity to publicly acknowledge his Cabinet colleagues for their support of the economic measures. “The Cabinet members had to sell a difficult initiative at a time when people were already hurting, just after we won elections in 2013. They have demonstrated a sense of character and leadership which was absolutely necessary in supporting and going forward and so, this award equally belongs to them.”

Current and former staff of the Ministry of Finance were commended by the Prime Minister for their role in advising him on the tough choices that were necessary. “I think it’s a win for everybody and I hope and pray this is a clear demonstration to all concerned that when we make sacrifices, the result and the benefits will flow to the country as a whole. I feel a sense of elation and I’m truly humbled by this award; it belongs to all of us.”

The Grenadian leader said the underlying lesson here is fiscal responsibility. “You have to be responsible in everything you do. If you are managing any activity, for example in your home, you cannot be making X dollars and spending X plus Y dollars; you have to live within your means. Successive governments over the years, including the NNP, were living beyond our means — getting into debt and not having the necessary means to repay it. That’s why we went down in a real sense, so the lesson to be learnt is that we must conduct ourselves, fiscally and otherwise, in a responsible way.”

Dr Mitchell was one of the 2018 awardees featured in a special edition of the Global Markets newspaper, published over the weekend. The article titled, Post-IMF Fiscal Resilience Rebuilds Confidence is available online at https://www.globalcapital.com/article/b1bby62qw6fy7g/finance-minister-of-the-year-caribbean.

Meanwhile, former Permanent Secretary in the Ministry of Finance, Timothy Antoine, who Dr Mitchell highlighted as one of the persons instrumental in Grenada’s economic turnaround and with whom the award must be shared, was himself a 2018 GlobalMarkets award recipient. Antoine, who is now Governor of the Eastern Caribbean Central Bank, was recognised as the Central Bank Governor of the Year for the Caribbean. Dr Mitchell has congratulated Antoine, noting that he continues to demonstrate an admirable level of professional excellence.

NOW Grenada is not responsible for the opinions, statements or media content presented by contributors. In case of abuse, click here to report.
Tags: finance ministerglobalcapitalglobalmarketstoby fildes
Next Post