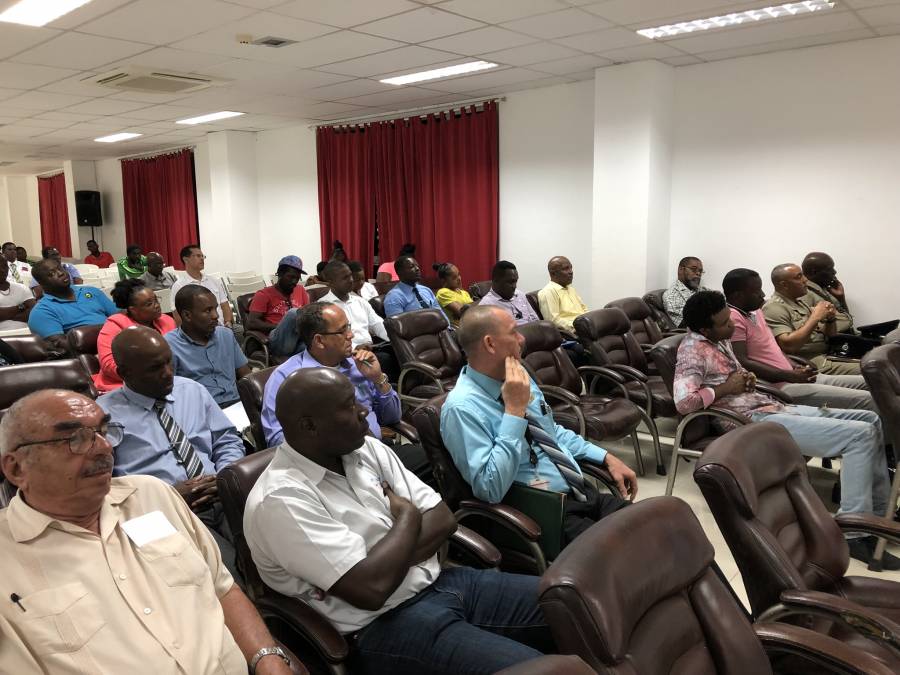 This story was posted 4 years ago
in Community, Technology
4 min. read

Members of the business community attending Tuesday meeting with the RGPF at the Hospitality Lounge, National Stadium
Share

As of September 2018, a 2.5% decrease of incidence of housebreaking and stealing was recorded from January to September as compared to the previous year. However, despite the decrease, the police are asking homeowners and businesses to ensure that their properties are secured especially around the yuletide season.

Sergeant Alfred Pierre of the Criminal Records Office said despite a 2.5% decrease of incidence of housebreaking and stealing, property owners must not become complacent. “When we compare crime in general over the period of 2017–2018 from January to September, we see that property crimes have decreased by 22.5%. However, people should not become complacent and not adhere to the safety tips and guidelines given the community relations department.”

Crimes such as burglary and robbery with violence have also shown a decrease. “Looking over our 10-year comparison, we see some top crimes being that of stealing, damage to property, and damage to property can be as a result of the Christmas season where people consume more alcohol and be a little more disorderly. We also look at trespassing, praedial larceny, housebreaking, and stealing. It should be noted that offences like burglary and robbery with violence have shown a decrease,” said Pierre.

Business owners are encouraged to be vigilant to safeguard their property. “We’d like to stress that the business community install cameras which is key, because this will help to deter potential perpetrators and also it would aid in the detection of crime,” Pierre continued.

The Royal Grenada Police Force (RGPF) on Tuesday met with members of the business community as they execute their Yuletide Operation to ensure the season is safe from criminal activities.

NOW Grenada is not responsible for the opinions, statements or media content presented by contributors. In case of abuse, click here to report.
Tags: crimecriminal records officecurlan campbellhousebreakingincidencepolicepropertyrgpfroyal grenada police forcestealingtheft
Next Post