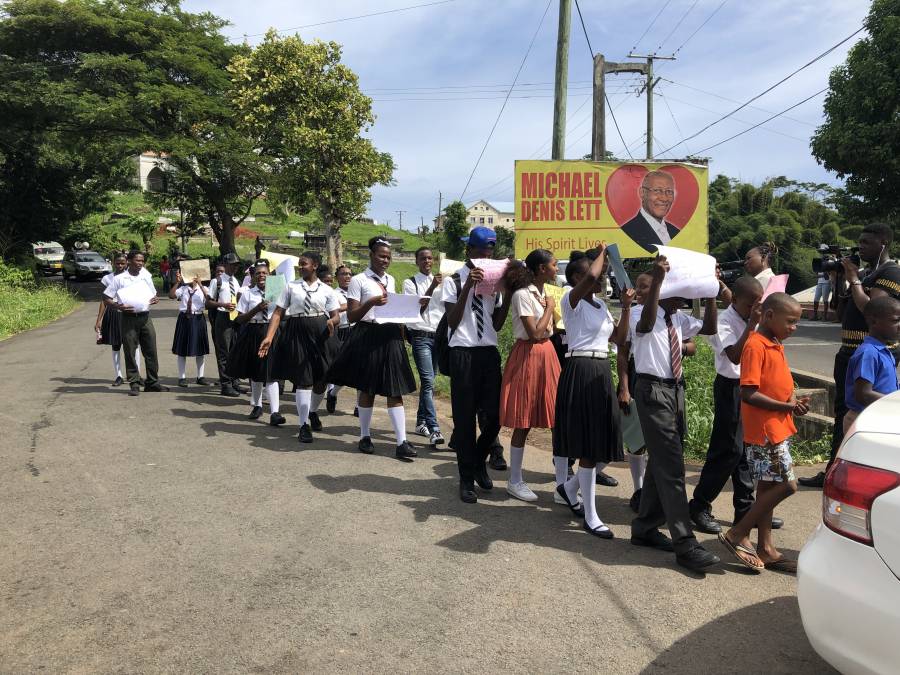 The student body of the St David’s Catholic Secondary School has vehemently denied being influenced by political activists to stage this morning protest. This is in direct response to the statement issued by the Minister for Education Hon. Emmalin Pierre. The statement read in part, “The entire community must safeguard against students and children being used by political activists and confusion-makers. All parents should please ensure that their children remain secure and safe.”

Students have indicated that their intention to protest was to call attention to the fact that while the government and the trade union are at loggerheads, students are caught in the middle especially those preparing to sit CSEC exams in 2019.

Supported by students of Presentation Brothers College, St Joseph Convent Grenville, and St Joseph Convent St George, the student body of the St David’s Catholic Secondary School demonstrated from the school through the streets of St David and ended near the La Sagesse Playing field. Many of their placards called for teachers to return to the classroom while others were not in support of the 2% gratuity offer from the government.

“While Prime Minister Keith Mitchell and others get their CXC passes and well on their way to pension, We the students are still waiting on a chance to accomplish such,” said one of the many placards held by the students.

Fifth form student of the St David’s Catholic Secondary School, Latonya Cadoo, said this current impasse between the unions and the government is having a negative impact on the students of the nation. “I am doing 12 CXC subjects and it is badly affecting me, being at home is not the best solution for us. I believe we can come back to school like normal while the Unions and government come to a final decision. We have a lot of SBAs still outstanding and although we have the responsibility to work at home, we still need the assistance of the teachers.”

Brandon Fleming of the Presentation Brothers College has called this situation very unfortunate and is extremely worried about the impact the loss of class would have on students preparing for CSEC exams. “We continue to fall behind the syllabus we like halfway there, but we still have another half to go. CXC is fixed and we are steadily approaching the date for CXC and we are falling behind. It is becoming extremely difficult for us fifth form students to get SBAs done, myself, for example, I have 13 subjects doing and I have a lot of SBA’s to complete which I am far from complete.”

Concerned supporter in solidarity with the nation’s children, Sherry George has described the Minister for Education statement as an attempt to intimidate students and infringe on their rights to freedom of expression. “To politicise this thing is out of order. I listen to the children up by the school and when the children said they made their own decision, nobody lured them into anything, they came up with this because they realised that they need their education. For children to march is a shameful thing. This went on in 1974 and for the life of me I never probably thought at this age I would have seen this again.”

Meanwhile, the statement issued by Minister Pierre has expressed the government’s “willingness to continue the dialogue with the Grenada Union of Teachers (GUT) and looks forward to their acceptance.”

Protest action by the GUT continued into its 9th day today as teachers were advised by the union to remain home until teachers are given their 25% gratuity payment.

NOW Grenada is not responsible for the opinions, statements or media content presented by contributors. In case of abuse, click here to report.
Tags: curlan campbellexamsgratuity and pensiongrenada union of teachersministry of educationprotestschool base assessmentst david's catholic secondary schoolstudents
Next Post 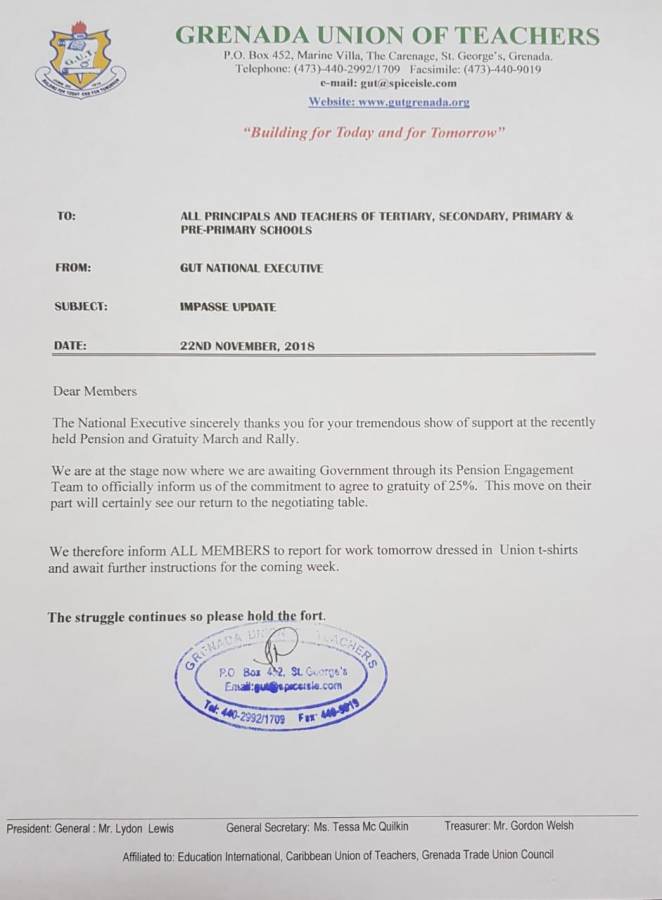