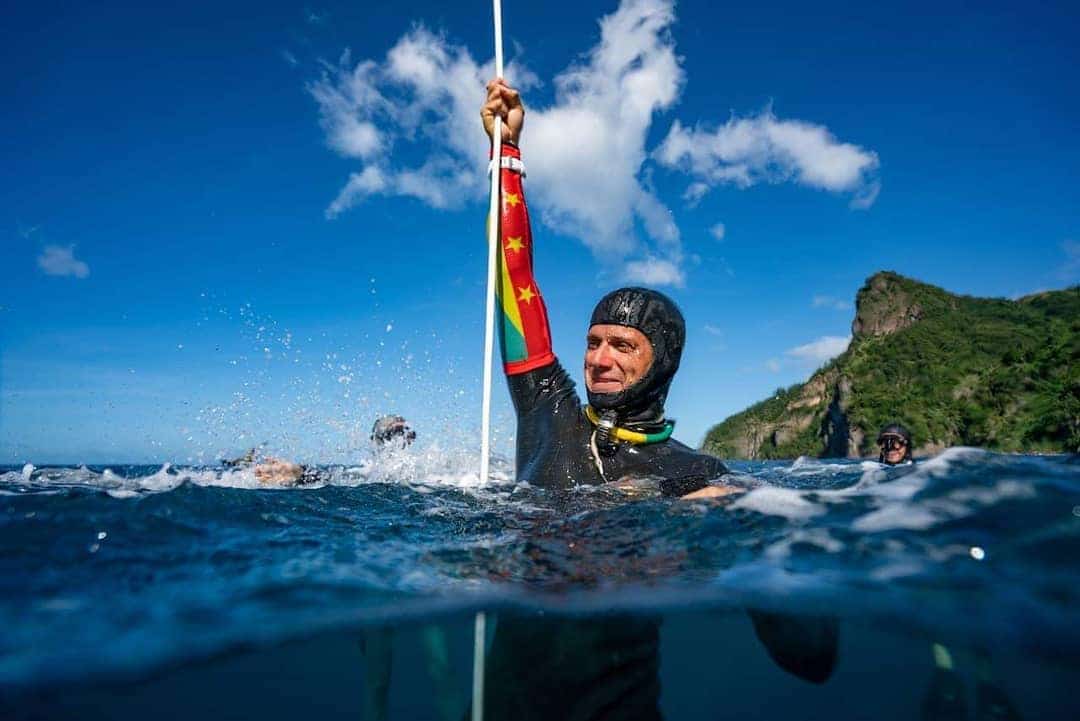 Nicolas Winkler became the first Grenadian to compete professionally in the extreme sport of freediving following his recent competition in Soufriere/Scotts Head Bay, Dominica at the 2018 Blue Element International Freediving Competition in November. Freediving in Grenada is commonly referred to as “barewind” by local spear fishermen.

While the average human can barely hold their breath for more than a minute, Winkler is capable of static breath hold of 5 minutes, an ability that has earned him a total of 8 national records. The current static record for longest breath-hold is 11:35 minutes by Stéphane Mifsud of France.

“Most of the preparation is mental; you have to be able to focus you are going into depth, 40 m is well past 100 ft so you have to mentally prepare yourself. A lot of the preparation is also physical so you do some conditioning. You do some training on land and you also condition to depth before the competition, so I went a week ahead of time to spend a week training on the platform setup that they have.”

Placing 8th overall in the men’s rankings, Winkler competed against some of the world’s best professional male freedivers including Stig Pryds from Denmark who took first place in the overall men’s division, Kurt Chambers from the United States and Sunnex.

During a freediving competition, divers are tethered with a safety lanyard to a dive line that descends at the depth to be attempted by the diver. The dive line is attached to a metal depth plate at the bottom surrounded by tags that the diver must secure before returning to the surface to prove that they have reached the required depth.

Safety divers are also nearby and would monitor the athlete for signs that they are unable to complete the dive. If an athlete is spotted having difficulties completing the dive, they will be quickly rushed to the surface and receive medical attention if needed.

With any extreme sport comes safety concerns, and for a freediver, the possibility of shallow water blackout due to oxygen deprivation and thoracic squeeze (lung squeeze) which occurs when air spaces and gas pockets within the body compress due to increasing pressure at increased depth, are all risks associated with the sport. Decompression sickness has also been another safety concern for very deep freedives since breath-holding can saturate the body with nitrogen that can be compressed and forced into the bloodstream and nervous system causing paralysis and even death.

Freediving is still gaining popularity, but the deaths of champion freedivers such as Natalia Molchanova, Nicholas Mevoli, Audrey Mestre, has raised questions on sport safety.

Winkler explained the risks associated with freediving. “There is a risk associated with any water sport that you do. The biggest risk with freediving is having a blackout. A lot of people think they can feel a blackout coming, usually by the time you feel a blackout, it’s too late you will already have passed out and the biggest risk in blacking out, especially when you are diving on your own or spearfishing on your own is when it happens in the water you are going to drown and there is no one there to help you.”

He cautioned people interested in the sport to first get certified from a professional freediving instructor. “Getting some certification, getting some training, understanding what the risk is and how to manage those risks. It’s a safe sport it has risks, but if it is done properly, done with the right training… it is a completely safe sport.”

Freediving has been used for centuries for spearfishing which in itself is also a recognised sport and with scuba diving, the most important rule in for anyone willing to test their endurance in freediving is to NEVER, EVER dive alone.

Winkler said the fundamental principle in freediving is both mental and physical relaxation which can be achieved through meditation.

“Most of my childhood was spent snorkelling in the water until I started SCUBA diving so both freediving and my evolution around my interest in marine life kind of grew up with me spending time in the water. I actually did a degree in marine biology, but diving is my passion and returning to freediving in the last 2 years… for some people taking up freediving is a way of overcoming fears… for me it’s not a fear actually depth is like an attraction.”

Winkler hopes that the sport can be established in Grenada and he has decided to start teaching freediving courses in 2019.

NOW Grenada is not responsible for the opinions, statements or media content presented by contributors. In case of abuse, click here to report.
Tags: apneablue elementcurlan campbelldecompression sicknessdominicafreedivingjonathan sunnexnicolas winkler
Next Post