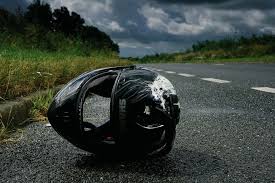 Sunday’s bike accident at Pearls airstrip involving Brent Joseph, a member of the Grenada Bikers Association, has again raised the issue of safety. Joseph, a resident of Concord St John was injured while practicing for the upcoming drag racing competition at the Pearls. The accident caused extensive injury to Joseph’s right leg.

President of the Grenada Bikers Association, Lorenzo Celestine, said despite Joseph being properly attired with safety gear, the incident had reinforced the need for all members of the association to be safe on the nation’s roads. “Not all of our members are compliant but what we try to emphasise is for. the use of basic gear such as your helmet, riding shoes and your gloves. But the thing about it is that Joseph had on his full gear and look what happened still; but that doesn’t mean it is an encouragement not to wear your gear because you always have to be mindful and be alert and ready for unforeseen circumstances.”

Three persons are nursing injuries at the General Hospital following a vehicular accident near the Grand Anse Shopping Centre last Friday. According to eyewitnesses, the White Noah, licence plate PAB283 which was heading south of the island seemed to lost control and slammed into a nearby wall, sustaining multiple injuries. The injured have not yet been identified, and it is still unclear as to their current state of recovery.