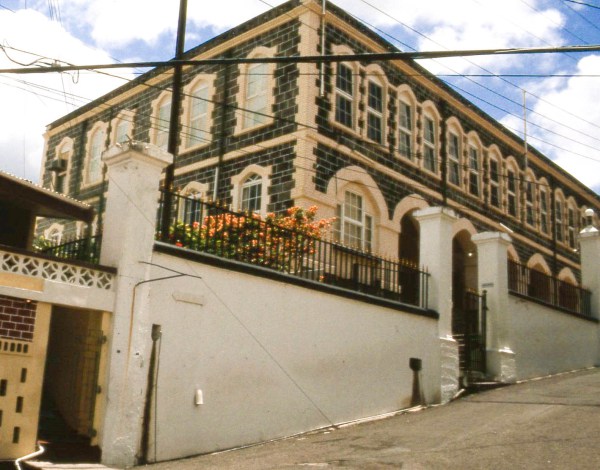 Lawyers in Grenada are disappointed with the slow pace of government in dealing with ongoing challenges within the judicial system. They want government to prioritise the issues which if not handled timely, could result in long-term negative effects.

To collectively display their frustration of the various problems within the judiciary, members of the Grenada Bar Association (GBA) wearing their robes gathered in the compound of the Supreme Court Registry and engaged in a silent protest to express their disappointment with government’s continuous delay in finding solutions to various weaknesses in the judicial system.

Lisa Taylor, President of the GBA said the membership considers it absolutely deplorable that in 2019, 15 years after the High Court (at York House) was destroyed by Hurricane Ivan, there is no permanent replacement.

Explaining the reason behind the protest Taylor said that it was a directive from the membership. “The immediate catalyst for us being here today was a directive or an ultimatum given by the Grenada Bar Association in September 2018,” she said, explaining that the GBA had given government a deadline to provide adequate facilities for the operation of the Court by 31 December 2018.

“The deadline came as we expected. We allowed in good faith for things to be done in good order and in good time. Nothing materially was done to change our situation. We find ourselves therefore in January, that deadline has passed; and we are compelled as members of the Bar to demand of the government and all relevant authorities that something in the nature of an urgent plan must be constructed and that plan must comprehensively address every aspect of our judicial system which we consider lies in tatters. There is no other way in which we can speak to the issue except in those terms,” Taylor said.

Pointing out the lack of a properly functioning judicial system is an issue affecting every single lawyer operating in Grenada, Taylor said that not having a venue for the court is only part of the problem within the judicial system.

“We stand here united as members of the Grenada Bar Association. We say to the Government of Grenada, enough is enough. It cannot stand that in 2019, 15 years on from the destruction of the court that we are still waiting for a permanent solution. Something more than what has been done has to be done,” said Taylor who opened her statement by reading a news release that the GBA previously issued calling on government to prioritise the needs of the registry.

“Every suggestive government has blame to carry in this matter. We have been calling on the authorities to arrest the decay of the registry and in 2019 we are not satisfied that anything of this nature that we have called the government to do has been attempted,” she said.

“We ask that the authorities come to terms with the realities and cause the fix to happen,” she said, calling for government to allocate the necessary funding to the Ministry of Legal Affairs or relevant line ministry so that a solution can be identified and be implemented.

Ruggles Ferguson, who is the current President of the Organisation of Commonwealth Caribbean Bar Associations said that the underlying problem with governments in the region is that the judiciary always gets low priority. “In other words, it is always a response to a crisis, a bandage put on a sore as opposed to dealing with underlying issues,” he said, confirming that in most regional territories there are problems with the judicial system.

In mid-2018, the Grenada High Courts came to a halt because of problems at the Hall of Justice which was located in the former LIME building on the Carenage.

NOW Grenada is not responsible for the opinions, statements or media content presented by contributors. In case of abuse, click here to report.
Tags: courtgrenada bar associationlinda strakerlisa taylorruggles fergusonyork house
Next Post

A Different View…Finding your sweet spot!!!