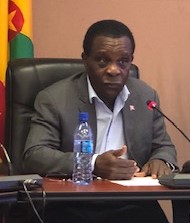 Prime Minister Dr Keith Mitchell who is presently serving as Chairman of the Eastern Caribbean Currency Union (ECCU), said that he is very pleased that none of the Organisation of Eastern Caribbean States (OECS) were placed on the European Union 2019 financial blacklist of countries with weak anti-money laundering and terrorist financing regimes.

Issued on Wednesday, 13 February 2019, the aim of the list is to protect the EU financial system by better preventing money laundering and terrorist financing risks. Trinidad and Tobago along with The Bahamas are the 2 Caricom nations which continue to be on the list that contains 23 countries from different jurisdictions, including the USA, Asia and Africa.

A news release from the EU said that as a result of the listing, banks and other entities covered by EU anti-money laundering rules will be required to apply increased checks or due diligence on financial operations involving customers and financial institutions from these high-risk third countries to better identify any suspicious money flows.

“We know we are living in a world in which we cannot afford not to undertake certain fundamental responsibilities, but we are all happy to be removed from the list,” said Prime Minister Mitchell who confirmed that each territory has received notice that they are being monitored by the EU to ensure that compliance is maintained.

One of the main actions taken by Grenada to ensure removal from the list, was the repealing of several financial legislation which provide for international businesses to receive special concession and treatment, that was described as unfair by the EU.

The news release from the EU said that on the basis of a new methodology, which reflects the stricter criteria of the 5th anti-money laundering directive in force since July 2018, the list has been established following an in-depth analysis.

The list has been established based on an analysis of 54 priority jurisdictions, which was prepared by the Commission in consultation with the Member States and made public on 13 November 2018. The countries assessed meet at least one of the following criteria:

For each country, the commission assessed the level of existing threat, the legal framework and controls put in place to prevent money laundering and terrorist financing risks and their effective implementation. The commission also considered the work of the Financial Action Task Force (FATF), the international standard-setter in this field.

The commission concluded that 23 countries have strategic deficiencies in their anti-money laundering/ counterterrorist financing regimes.