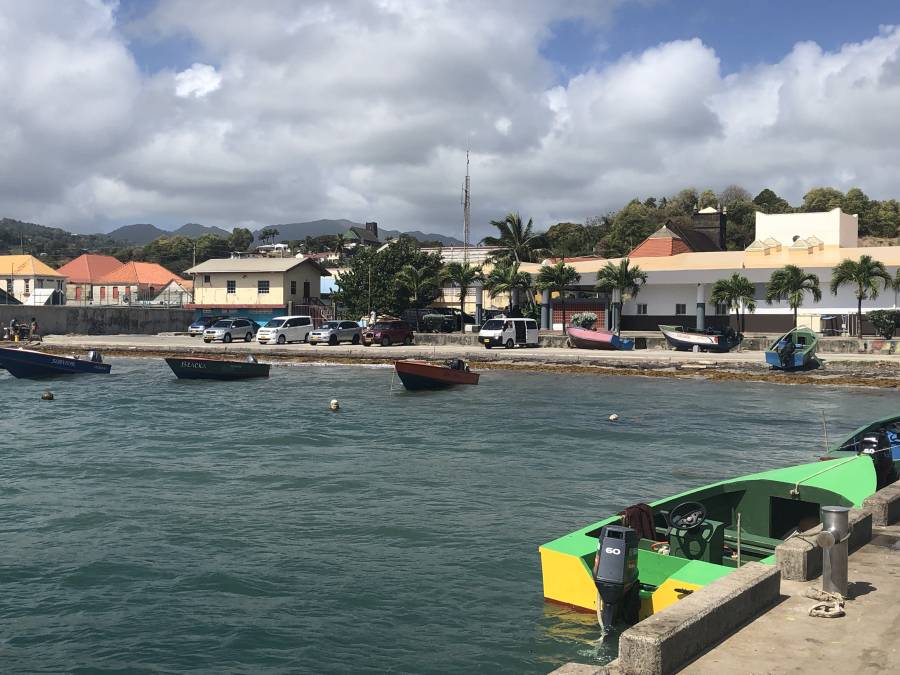 The Fisheries Division is monitoring a reported sighting of 2 fishing vessels nearly 2 months ago by fishermen on the eastern division, particularly from Grenville and surrounding areas.

There were complaints from fisherfolk that the ships believed to be of Japanese origin were sighted near a Fish Aggregating Device (FAD) deployed 20 miles offshore, and it is suspected that the vessel is engaged in illegal net fishing in Grenada’s Exclusive Economic Zone (EEZ) without a flag of convenience.

The term “flag of convenience” refers to registering a ship in a sovereign state different from that of the ship’s owners.

Fisherman Oliver Charles’ boat anchor was caught in the net of the larger vessel and was being dragged out to sea. He described the colour of the first boat sighted as green with a white stripe and yellow stripes together with a red colour fishing vessel.

Charles says the vessels’ occupants seemed to show threatening signs after he refused to remove his boat. “They were just coming after us with the big boat, so it meant that we had to move. At a certain time I went back and when I arrived, I saw 2 long cables out in the water so I went about a mile on the side of it and it appears to be a net being dragged behind it.”

The fisherman said the day after the incident, he ventured to fish in the same location but was unable to catch any fish in an area that is known to be a popular fishing site. “The next day we went back fishing, and it was like all the fish disappeared.”

Fisheries Officer in Charge of the eastern division Toby Calliste says he has brought forward the complaints from the fisherfolk to the authorities within the Fisheries Division and the Grenada Coast Guard.

“This boat is fishing within our Exclusive Economic Zone (EEZ) and around our fish aggregating devices which have been built by the Grenville FAD Fisher Organisation; and they have the jurisdiction to fish around the FAD without having any interference, especially from any foreign fishing vessels and this boat does not carry a flag of convenience so you do not know if it has been issued a foreign licence.”

Calliste says if this practice of illegal unreported and unregulated fishing continues this can potentially deplete the fishing stocks for local fishermen. “When someone is dragging their net, it catches everything, including juvenile fish and depletes the fishing stocks.”

Senior Fisheries Officer, Moran Mitchell has stated that the fisheries division has not issued any licence to any foreign vessel, and has been investigating the sighting of such a vessel but to no avail. He did say that this matter is not being taken lightly.

“After we heard reports from St Andrew fishermen that a foreign vessel without a flag [was] operating in Grenada’s territorial waters, we went to the Grenada Coast Guard to ascertain if this was correct, but we were there in the very area for 4 hours and we have not seen any sighting of any vessel.”

He stated that if what was reported by the fisherfolk is true then these vessels are illegally fishing in Grenada using a method of drag nets that is outlawed. “Grenada’s method of fishing is long-line and if a vessel were to drag net in Grenada that is not our policy… In the Grenada fisheries division, we have not issued any such licence for that operation especially where drag nets are concerned.”

The Fisheries Act of 1986 empowers the Minister Responsible for Fisheries to grant foreign fishing vessels licence to fish in the fishery waters of Grenada, ie within its Exclusive Economic Zone – EEZ (Part II section 8 (3), see attached). However, this section of the act also specifies certain conditions that must be met in granting such a licence. Section 8(4) stipulates that “no foreign fishing licence shall be issued to any foreign fishing vessel unless there is in force with the Government of the flag state of the vessel or with the association of which the owner or charterer is a member, an agreement entered under section 7 to which the Government of Grenada is a party.”