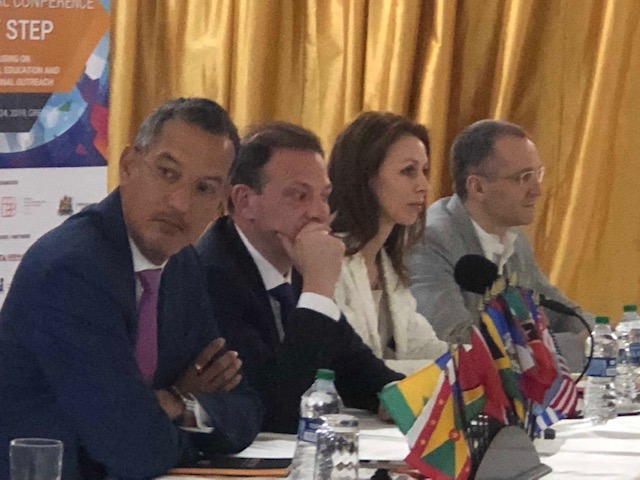 Grenada warns against using its citizenship to escape the justice system

Grenada warns against using its citizenship to escape the justice system

Minister Steele with Sergey Brilev and other Russian officials
Share

International Business Minister Nikolas Steele has warned that anyone who attempts to use Grenada’s citizenship to escape a criminal trial or engage in criminal activity, will lose it once the relevant authority draws it to the attention of Grenada.

Speaking to a group of Russian investors during last week’s Next Step International Conference, he told them that Grenada citizenship gained through the Citizenship by Investment Programme or through legislative regulations is not an opportunity for anyone to shield from wrongdoings.

“We have extradition treaties with lots of countries. We have an extradition treaty with Russia and if Russia requests you for anything illegal, we will send you back, we will hand you over,” he told the conference whose participants included Russia’s outgoing and incoming ambassadors to Grenada.

Steele told the participants that Grenada will also revoke the citizenship and passport from anyone who is extradited. He informed them that there are persons whose passports were revoked after receiving the citizenship and the passport, because it became clear that they wanted to use it to escape the justice system from a country with which Grenada has an extradition treaty.

He did not share details such as the number of persons affected by government revoking or extradition action.

This was the second International Next Step Conference organised by the Russian Investors, the objective of which is to strengthen and deepen the relationship with Grenada and other Caribbean islands. Within the region, there were also participants from St Lucia, Antigua and Barbuda and St Kitts and Nevis. It was held at the Grenada Trade Centre in February.

The conference was organised by the St George’s Club of Russia, the Government of Grenada and Instituto Bering-Bellingshausen para las Americas.

Besides the presentations in Grenada, several persons from the group had talks with Dr Ralph Gonsalves, Prime Minister of St Vincent and the Grenadines in a special session last Saturday morning.

“The Next Step event is a convenient setting which facilitates open discussion and candid exchange of opinions on major topics regarding the regional and global economy,” said Sergey Brilev, President of Instituto Bering-Bellingshausen para las Americas.