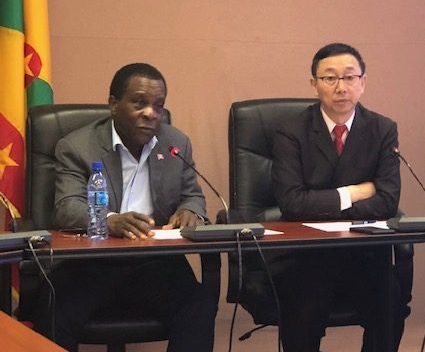 Tao Zhang, Deputy Managing Director of the International Monetary Fund (IMF) said that his organisation is very impressed by the strong economic performance of Grenada from 2014 when the country adopted a structural adjustment programme and has pledged his institution support to continue working to help Grenada.

“We hope that we will work together in the future to build up, based on the good performance of the country and also based on our very good relationship to continue our joint efforts to make the country better,” Zhang told journalists in a news conference on Thursday. The session with the media concluded a 3-day visit.

Explaining that the special mission in which the team met with social partners and other stakeholders is not the annual Article 4 consultation, Zhang said that the purpose was to try and enhance the good relationship with the Government of Grenada and to improve the institution’s understanding of what is going on in the island which is experiencing 6 consecutive years of growth and a debt ratio which moved from 108% of GDP in 2013 to 62% in 2018.

Prime Minister Dr Keith Mitchell said the progress made in the country since his return to power in 2013 is now becoming best practice for other members of the IMF and the positive rating from the IMF will bring further opportunities from other international organisations.

“When IMF gives a great grade, it sends a message to others and this is how we get tremendous opportunities from other donors,” said Dr Mitchell who explained that the positive rating will not see Grenada receiving any special gifts from the IMF.

While on the island the mission met with the social partners at a luncheon hosted by the government. Zhang told the representatives that Grenada has recorded significant breakthroughs in its economic challenges. “Grenada’s authorities have done remarkable things in bringing down debt and leaving better public finances for future generations. These important gains are a national asset and a product of the hard work of all Grenadians. They deserve to be protected.”

Zhang who is second in command at the IMF official said that the policy of fiscal discipline instituted by the current administration, supported by the Fiscal Responsibility Law, helped to break a pattern of high debt and low growth.

“The fiscal adjustment helped cut the deficit by almost 10% of GDP. It also helped reduce public debt from 108% of GDP in 2013 by more than 40 percentage points by now,” said Zhang who explained that contrary to popular belief, the significant fiscal adjustment did not negatively impact output. “Growth in Grenada has averaged 5 1/2 % annually. This compares favourably with other countries in the ECCU and the Caribbean. Crucially, the government’s strong efforts received broad backing from domestic stakeholders through a negotiated social compact.”

Notwithstanding these positive developments, Zhang told the social partners and reiterated to journalists that there is a need for the country to focus on building resilience. “The focus on post-disaster recovery should be supplemented with better all-around preparedness. The experience with hurricanes in the region continues to highlight the need to build more resilient infrastructure and have resources to address problems immediately,” he said.