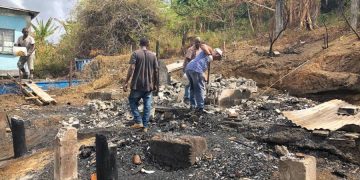 This story was posted 3 years ago
in Community, General News
2 min. read 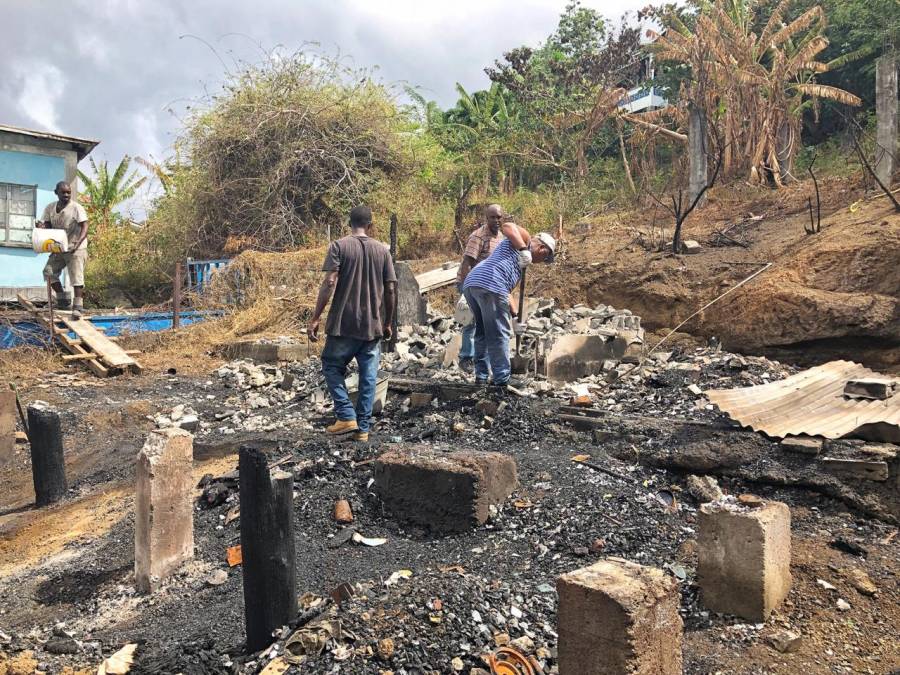 Clean up after last Saturday's fire at Cherry Hill
Share

Gracie Hacket and her family continue the massive clean up after the fire that destroyed 3 buildings including a tailor shop in her yard at Cherry Hill, St George approximately 5:20 pm on Saturday, 23 March.

Hacket, who at the time was attending her daughter’s wedding, was made aware of the fire and rushed home to meet her 2-storey house in rubble. Two nearby buildings received partial damage as a result of the fire.

The homeowner who briefly returned home on Saturday to retrieve cutlery and items for the wedding reception said there was no sign that her house was in danger. “I went into the kitchen took the knife for the pie, picked up the warmers and everything and I came out and closed the door. There was no smoke or anything because my kitchen is in the back of the house so for me to walk through the whole house and go get the knife in the kitchen, fold it in a bag and come out with it, if there was anything burning I would have smelled it or I would have seen it,” Hacket said.

Hacket got the news shortly after returning to the reception at St John’s street. She said the fire may have been triggered by the surge of electricity that was restored after being taken by Grenlec. “When I came here, they told me that the electricity had [gone] off just after I left and so I think when the electricity came back on it must have triggered off something.”

Hacket is awaiting the report from the fire department. Meanwhile, she is residing with her brother as the recovery process continues. Hacket’s fiancé and her 20-year-old grandson also lived with her at Cherry Hill.

She indicated that her recovery process is going faster than previously expected. “Recovery process is going faster than I thought because we are cleaning up the debris and everything that is there. We had a big truck came in to assist. Yesterday we started and today we are almost done. We are waiting for the fire report, we are also in the process of looking for a place to put me because I am with my brother.”

A relative posted on NOW Grenada, “…am completely lost for words, I thank God that no one got hurt.”

NOW Grenada is not responsible for the opinions, statements or media content presented by contributors. In case of abuse, click here to report.
Tags: cherry hillcurlan campbellfiregracie hacket
Next Post

Republic Bank rocked their socks for World Down Syndrome Day