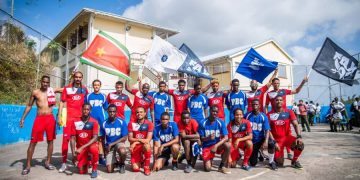 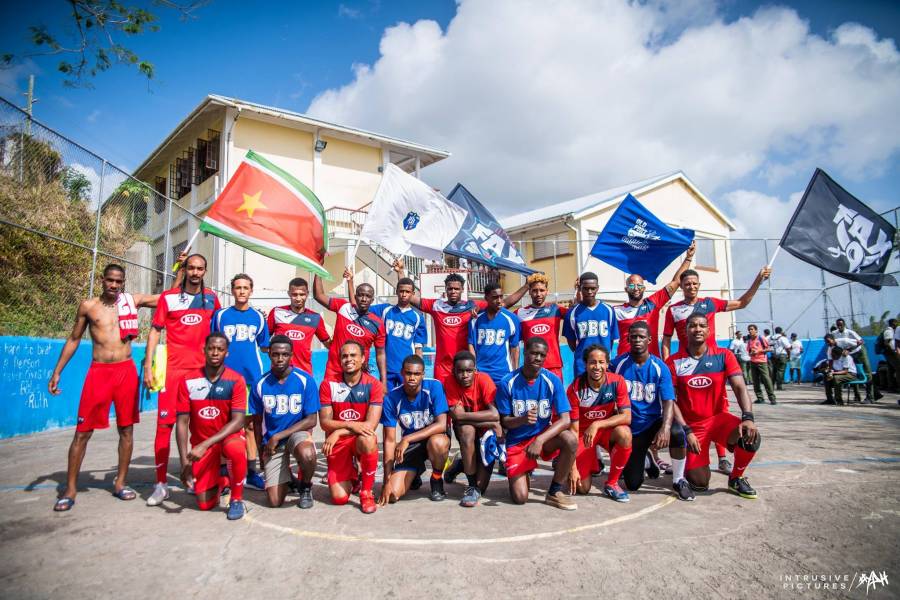 On Monday students from Presentation Brothers College (PBC) got the opportunity to understand the fundamentals of Futsal with visiting Guadeloupean team FAX Futsal. The team arrived in Grenada aboard the Costa Magica which berthed at the Melville Street cruise ship terminal.

After exhibiting a musical performance with drumming and chanting in front of the Esplanade Mall, the team paid a special visit to PBC where they engaged the young men in a friendly exhibition match.

“The experience has been good. It is good to have international Futsal players coming here and give us some experience and teach us what they know about the sport. We are very happy, and we learned a lot.” said PBC’s Football Coach Lydon Cato.

Similar to soccer, Futsal is played with 5-man teams on a basketball style indoor court. Because Futsal requires a smaller playing area as compared to Football, this means more pressure on the ball, less running with more passing, and a lot more controlled movements with the ball allowing lots of sharp movement off the ball since players are never static. The sport is recognised by the Confederation of North, Central America and Caribbean Association Football (CONCACAF). It was once seen as an amateur sport but in recent years has seen tremendous growth in popularity after professional football players such as Pele, Zico, Ronaldo and Neymar, credited Futsal for allowing them perfect their skills before transitioning to the outdoor game.

Jaheim Henry, a PBC student enjoyed competing against FAX Futsal. “I got an opportunity to learn a faster game of football which I enjoyed. I don’t normally play fast football so this was a learning experience for me.”

Prior to arriving in Grenada, FAX Futsal visited Tobago as part of their Caribbean tour. Vice President of FAX Futsal Youko Tacita was pleased with the support they received in Grenada, especially from the students. He believes the sport is now receiving the international recognition it deserves and encourages Grenadian students to consider taking up the game more seriously. “When we got the opportunity to tour the Caribbean we jumped at the idea. This allows us to connect with our Caribbean neighbours. In Grenada, we played exhibition matches with the students, and we really enjoyed the camaraderie.”

Coach and player Manuel Amharik Chaffort hosted a session with the students on the fundamentals of Futsal. “We did an initiation of Futsal for the youth by explaining the dynamics of the game like how to defend, the way you attack another player and the way you control the ball; the difference between Futsal and Football which they know very well so we wanted to teach them as much as we can. Another major difference is that the ball used in Futsal is a lot smaller and heavier than regular soccer.”

After their exhibition match, the Futsal team left Grenada for Barbados where they will be engaged in similar activities on the island. Their tour is expected to conclude in St Lucia.

Neila Ettienne, a teacher at PBC, was instrumental in getting the team to visit Grenada, and believes the experience created through the exchange of culture through sports was priceless. “It is always good for cultural exchange since they are from a French-speaking island. It was a great opportunity for the local students, especially our footballers to interact with people from different cultures and to learn a sport as well.”

The Guadeloupean Futsal Team is the first club to set up a women’s futsal team and an academy that aims to bring a new mode of governance and communication in the Guadeloupean Sports Associations.