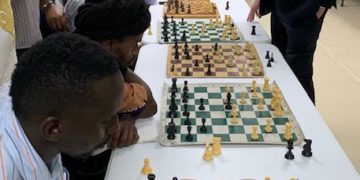 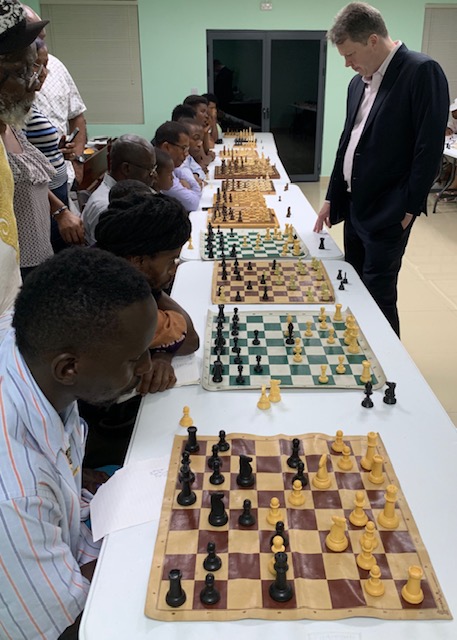 Chess in Grenada has received a significant boost with the recent visit of Grandmaster Nigel Short MBE, one of the most celebrated British players.

Grandmaster Short left Grenada over the weekend, following a 4-day visit here spreading the gospel of Chess. A world championship finalist in 1993, and once ranked number 3 in the world, Grandmaster Short has been playing Chess for over 48 years.

In a packed 4-day programme from 26 February to 2 March, Grandmaster Short participated in the launch of the first ever Grenada Chess Federation (GCF) on 28 February where he spoke and also played simultaneous exhibition matches against 25 players, earning 24 wins and 1 draw; met with students of 3 secondary schools; engaged the Minister of Sports at a luncheon meeting and participated in 4 radio and television interviews.

On the lighter side, he thoroughly enjoyed himself at the National Cricket Stadium on Wednesday, 27 February witnessing England defeat the West Indies in an exciting One Day International match, during which he met and had exchanges with several government ministers including Minister of Education Hon Emmalin Pierre and Minister of Youth, Hon Kate Lewis. He used the opportunity to highlight the importance of chess in schools and among youth in communities.

On Thursday and Saturday, he was also able to experience the sheer natural beauty of Grenada during sightseeing tours.

Meeting at the GBSS Auditorium on Friday, 1 March with over 100 students from Presentation Brothers College (PBC), Boca Secondary School (BSS) and Grenada Boys Secondary School (GBSS), who play or have an interest in playing chess, Grandmaster Short shared the benefits of the game in developing the mind and his own rich experiences as an international player. Noting that success only comes with hard work, he urged the students to take the game seriously, so that they too can compete in the international arena.

Grandmaster Short was very encouraged by the meeting with Minister of Sports Senator Norland Cox on 1 March, who expressed full support for the chess initiatives being undertaken in Grenada and examined possible areas of co-operation with FIDE (World Chess Federation) including training, provision of chess boards, and participation in international competitions. Grandmaster Short is a Vice-President of FIDE.

On Saturday, 2 March Grandmaster Short left for St Vincent & the Grenadines on the second leg of his mission to promote Chess. He is also expected to visit St Lucia, Antigua, St Kitts and the Cayman Islands.