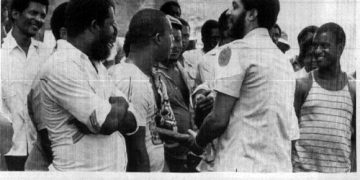 This story was posted 3 years ago
in General News, History
3 min. read
Share

“Instead of celebrating 40 years of real people’s participation, community development, unprecedented prosperity in the shortest period of time that we have ever seen, we are relegated today to commemorating a faded memory.”

Dr Terence Marryshow, Chairman of The Maurice Bishop and October 19th, 1983 Martyrs Foundation sort to set the record straight by disassociating the foundation from the Grenada Revolution Celebrations Committee (GRCC), which at present is staging a number of activities to commemorate the 40th anniversary of the March 13th, 1979 Grenada Revolution.

A release issued by the foundation, stated that they have opted to disassociate themselves from the Grenada Revolution Celebrations Committee, claiming that the “Committee is a front for the remnants of the Bernard Coard Fraction and those mainly responsible for many of the atrocities committed during the revolution and specifically the extremist action that led to the untimely demise of the Revolution.”

Dr Marryshow who has chaired the foundation since 1983, has continually staged activities dedicated to commemorating the achievements of the Grenada Revolution. He strongly believes that there are attempts by the newly formed Grenada Revolution Celebrations Committee, to erode many of their efforts achieved over the years by now falsely parading as the guardians and defenders of the revolution.

Ferguson reminded that no one person or committee has sole autonomy over the Grenada Revolution. “The Grenada revolution belongs to no one, it belongs to no entity, no organisation, but belongs collectively to the people. It is an integral part of our history and whomsoever wishes to celebrate it or not celebrate it, that is their right.”

Ferguson described the accusations thrown against them as unfortunate, at a time where unity should be the order of the day.

“We should all be about uniting, embracing, coming together, especially after the lessons of the revolution that created so much division; that the positives of the revolution are not seen because people associate the revolution with the detention, with the killings and negativity… and is really unfortunate that [people] with experience and themselves supporters of the revolution should try to cast shadows on others who are attempting to do what they also wish to do and it is their absolute right to do so.”