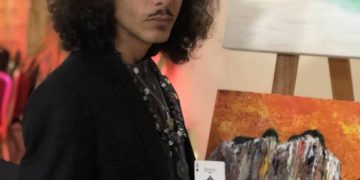 This story was posted 3 years ago
in Arts/Culture/Entertainment, Video, Youth
3 min. read
Share

23-year-old Jonathan Batihk of Golf Course Hill, Grand Anse, has a fun-loving character, with a knack for performing his clever card tricks in public. But Batihk says he is more than just a street magician with dreams of becoming a successful aircraft pilot in near future.

He is a past student of the Presentation Brothers College, later venturing on to study in South Miami Florida at the Dean International Flight School, but an unexpected turn of events following the shutdown of operations of Dean International in July 2018, after a mid-air collision that killed 4 people, forced him to return to Grenada.

“A mid-air collision with two of the school’s planes led the owner to shut down the school. That then brought slightly turbulent times which I was able to work myself through. Those times served as building blocks for me as well,” said Batihk.

While his goal is still to become a pilot, wowing people with his sleight of hand and magical illusions is his second love. Inspired by the likes of American magician and illusionist, Criss Angel and Kess the Illusionist out of Trinidad and Tobago, Batihk perfected his craft while in TA Marryshow Community College performing for his peers and later moved out into the streets of St George’s and further afield.

He said much of his spare time was used practicing and learning to perform new tricks and illusions and perfecting old ones.

“It was when I was in college actually, I started off learning card tricks…and then eventually I learned tricks from Kess the Illusionist from Trinidad and other friends here in Grenada,” he told NOWGrenada.

Batihk can sometimes be seen with his deck of cards in hand performing in various public places but his most popular performance was in Bridgetown, Barbados.

Batihk explained what happened next. “When I was in Barbados in 2017, I put out a live video, and so I went around to different houses to get people to know that I will be in Bridgetown doing magic, so I showed up on a Friday and started doing a little magic…and then I had this one trick up my sleeve that I knew will get everybody going and then the crowd gathered and then I executed the trick and it was to the point where I was able to pull the guys card out of my shoe.”

Simple card tricks are just a sample of what Batihk can do. He has surprised onlookers by performing illusion such as pulling coins from behind their ears, to Levitation, making water disappear from one hand to the other and misdirecting a person’s attention while he secretly removed their watches with them having no knowledge of what happened.

The 23-year-old magician was given the opportunity to perform at the recently held 1N1 with Rachel Price, a Trinidadian comedian, and radio personality who performed on staged at the Grenada Trade Centre Annex.

After the show, Batihk continued to amazed patrons outside the venue who attempted to put his skills to the test.

Although his skills are entertaining and jaw-dropping, to say the least, he maintains that he is in the process of perfecting his craft and hopes that he can be ranked among the best street magician in the world.

Book “By Our Own Hands” launches today at Norton Hall