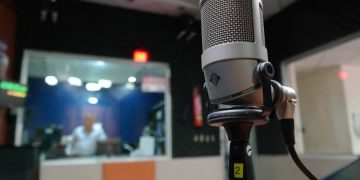 This story was posted 3 years ago
in Arts/Culture/Entertainment, Business, Video
3 min. read
Share

The local music industry in Grenada needs proper management structure in place to capitalise on the exposure received through the recent victory of Hollice “Mr Killa” Mapp at the International Soca Monarch (ISM).

These are the sentiments expressed by the CEO of Made In Grenada, Dexter Mitchell as he recognised the achievements of not only Mr Killa but the 4 other artistes in competition including Hector “Mr Legz” Thomas who placed 3rd in the Power Soca Monarch and Jevaughn “Vaughn” John who placed 3rd in Groovy International Soca Monarch. Mitchell also heaped praises for the other two artistes, Dingaan “Lil Natty” Henry and Nyelon “Thunda” Williams and Mandella Linksz, who competed in the Power and Groovy categories, respectively. He said their presence in Trinidad has opened new avenues for local music on the international stage. However, Mr Mitchell says without the proper management, young and upcoming artistes will not be able to maximise and monetise on the opportunities that will become available.

“The success of Mr Killa will have to open doors and create avenues… we had an avalanche of artistes getting through this year. We have 5 them successful in the finals, but there has to be a proper channel through which we can operate.”

“If you go to Trinidad for example, you are not by yourself. You have a team around you who can network and get in contact with [people] and make connections, so I think the local artistes — and not only those who have been successful — but other artistes who are looking to be successful, would have to look at that networking,” he said.

The issue of artistes not being able to properly copyright their music and the apparent lack of proper negotiating skills needs to be improved significantly.

“In terms of the business structure where these guys can make a proper living, a lot has to do with their own attitude, not having a management structure, not being able to negotiate properly, not being able to represent themselves properly. If you want a contract from a company, you will have to be able to conduct yourself in a certain manner and dress appropriately. There is a lot of work to be done, but hopefully the exposure that we are getting will force the necessary changes,” said Mitchell.

While on the topic of developing Grenada’s soca music, Mitchell’s company, Made In Grenada, has just completed a documentary called Jambalasee, a film that features the origins of Jab Jab Music and its originators, including Don and Ricky Charles of Moss International, and Singing MC, among others.

Mitchell says this is a step in the right direction as this history is worth saving for future generations. “There has been conversation that Grenada has not been credited for the development of Jab Music and for the use of conch shell in Jab music. So we thought it very important to have it recorded… the first time the conch shell was used in live music we can identify where it was done and by whom, how the drum pattern came about, taking the patterns from the goatskin drums and putting it on acoustic drums, so we have that as a learning tool.”

He announced their next project which will seek to document the first time soca rhythms were created in Grenada. “We are very clear on what the next documentary will be. In fact, we have started work on that. Grenada was the first country to develop soca rhythms. The first soca rhythm was the cellphone rhythm… so we actually have begun a process to record the documentary on that, and how the discussion came about that led to the first soca rhythm anywhere in the world.”