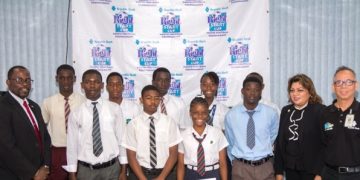 The curtains closed on the Republic Bank RightStart Cup Youth Football Tournament for the 15th year.

Team representatives, teachers and coaches gathered at Republic House in Grand Anse for a brief closing ceremony attended by Acting Minister for Youth Development, Sports, Culture and The Arts, Senator Dr Winston Garraway and other ministry officials; along with Managing Director of Republic Bank, Keith Johnson and other senior bank officials.

The 2018 tournament was forced to end prematurely due to the ongoing impasse with government and employees of the public sector. Although this was not the closing ceremony envisioned following the grand launch of the competition in September 2018, Republic Bank thought it important to acknowledge the committed participation of the 22 secondary schools; and to recognise in a tangible way, the 12 teams from 8 schools who worked hard and advanced to the semi-final stage of the tournament prior to its untimely conclusion.

Shaeen Ghouralal, General Manager Credit of Republic Bank, expressed on behalf of the bank how pleased they are to award the young footballers for their hard work. In her address, she indicated that Republic Bank views this as “a direct deposit to the development of our most valued human resource, our youth, and we are more than proud to have supported this initiative for 15 years.” A small cash incentive was presented to the 12 teams as a token of appreciation for their continued dedication the RightStart Cup.

Republic Bank’s sponsorship, which spans 15 years, has touched hundreds of students who participate in the tournament annually from secondary schools across Grenada and Carriacou. As part of Republic Bank’s Power to Make A Difference programme, the bank has cemented its support of this initiative and views the RightStart Cup as its premier sponsorship event.

Senator Winston Garraway, speaking at the closing ceremony commented, “Republic Bank is more than a sponsor; they are a friend to football. The direct grant of the Bank in the amount of $80,000 annually amounts to over 1.2 million over the 15 years of the competition which has gone directly into the future of our young people through the sport of football.”

The Senator was in high commendation to the bank and thanked them for their investment and consistency.

Keith Johnson, Republic Bank’s Managing Director, in congratulating the semi-finalists for advancing in the tournament, encouraged the students to reflect on the circumstances that resulted in the premature end to the 2018 tournament. He challenged them to use this disappointment as a lesson in resilience. He also urged them to use this as a positive learning experience to deal with situations that don’t turn out well for them; so, when faced with challenges in the future, they can make wise decisions. Johnson stated that the bank looks forward to this being “the first, the last and only occasion the tournament did not have a fitting conclusion.” It is the hope of Republic Bank that RightStart Cup 2019 will return even bigger and better.

The semi-finalist schools and teams who received awards are as follows:

NOW Grenada is not responsible for the opinions, statements or media content presented by contributors. In case of abuse, click here to report.
Tags: footballkeith Johnsonpower to make a differencerepublic bankrightstart cupshaeen ghouralalwinston garraway
Next Post