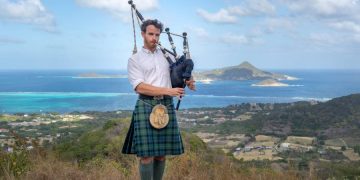 This story was posted 3 years ago
in Arts/Culture/Entertainment, General News, Travel/Tourism
4 min. read 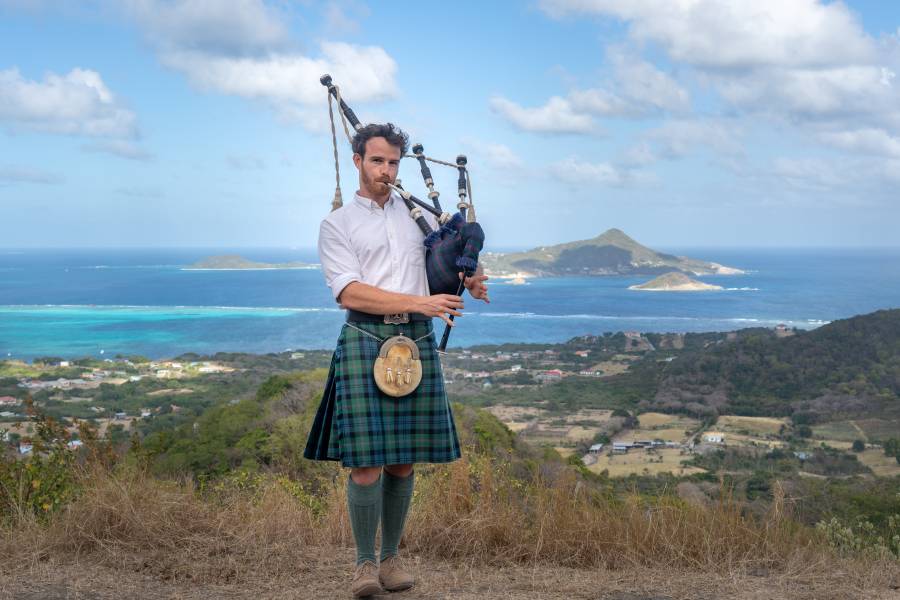 Ross Jennings at the viewpoint at the Princess Royal Hospital, Carriacou
Share

A recent visit to Grenada, by Scottish travelling blogger and professional bagpipe player Ross OC Jennings has formed an integral part of his journey of being the first person to play the bagpipe in every country around the world. Dubbed ‘The First Piper’ his visit in February makes Grenada the 91st country in his world-record goal.

The inspiration to achieve such a feat came after a visit to the London Travel EXPO after graduating from university where he was intrigued by the experiencing of other adventurers who shared their expeditions from across the globe.

Jennings, from Edinburgh, already has a large social media following with over 25,000 Instagram followers and has become a worldwide sensation for his bagpipe-playing photos in Ethiopia, Lesotho, Oman, Brunei, Myanmar, Panama, Malta, and Bhutan.

Bagpipes as an instrument has existed in various forms in different cultures around the world but the bagpipe in its present form has its origin in the Scottish Highlands. it is considered Scotland’s national instrument developed by the Gaelic people who established it as their musical instrument of war and peace.

It is played by blowing air into the airtight reservoir, an animal skin bag which holds and regulates the flow of air, allowing the piper to breathe and maintain a continuous sound. Attached to the bag is the chanter or melody pipe, usually played by one or two hands. The drone allows the pitch of the pipes to be altered, and generally comprises two or more sliding parts.

Jennings’ journey to make history started in 2014, but his talent for playing the bagpipe started long before. “When I was 14 years old, I was given the opportunity to learn the bagpipes for free at school. I thought it was a no-brainer, but bizarrely I was the only one in my whole school year to take up the opportunity. I had the most fantastic bagpipe teacher, called Bernie Aitken, and it was thanks to her that I’m here today. She was passionate, engaging and, most importantly, fun to be around, so learning the bagpipes was never a chore, but rather something that I always looked forward to doing.”

Over the years Jennings was given the opportunity to play at various concerts, but it wasn’t until he finished high school that he realised how useful and unusual an instrument it is.

“I was often asked and paid to play at weddings, funerals, parties etc and it wasn’t long before I had enough money to fund a bit of travelling. Skip to after university, I studied Economics and Chinese at the University of Edinburgh and I decided I wanted to do something different with my life so I set off on this Kilted Adventure to try and play the bagpipes in every country.”

Clad in his kilt, a knee-length skirt with pleats at the back, Jennings was spotted in several places on the island including the world-famous Grand Anse Beach.

“Whenever I visit a new country I try and play the bagpipes in a public place or at a national monument. Fortunately, I arrived the day before the Grenadian Independence celebrations, so I had plenty of opportunities to play. On the morning of Independence, I met up with some Grenadian friends and we wandered down to the national stadium to take part in the festivities. Although I spent most my time spectating, I did manage to crack out the pipes and perform for some of the Short Knees in the area just outside the stadium.”

Jennings said having the opportunity to explore and exchange cultures was a rewarding experience. He already has plans to revisit Grenada next year. “It ended up being a lovely exchange of traditions as we were able to share stories of our own cultures. I was just as interested in the Short Knees as they were in the kilt and bagpipes! Other than the independence celebrations, I piped the sundown on the beautiful Grand Anse beach and I also made it to Carriacou where I piped at the viewpoint right by the Princess Royal Hospital. Carriacou really is a special island with an interesting Scottish heritage, and I’m already planning a return trip in 2020. Hopefully, I’ll also be able to make it to Petite Martinique as well!”

So how does he fund his expedition around the world? “I have a small business called “Breacans” which I have with my partner. We do educational workshops at schools and we also put together tours and trips to various destinations around the world.”

Jennings aim is to learn as much about this earth as he possibly can. “There is so much knowledge to be gained from interacting with people around the world, communicating and listening to stories. Travelling puts me in plenty of situations where I’m forced to learn, challenge my own beliefs and change my opinions.”

NOW Grenada is not responsible for the opinions, statements or media content presented by contributors. In case of abuse, click here to report.
Tags: bagpipecurlan campbelledinburghfirst pipergaelkiltross jenningsscotshort kneeuniversity of edinburgh
Next Post