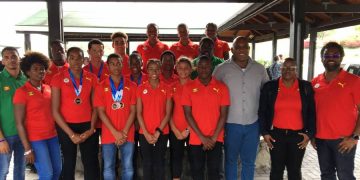 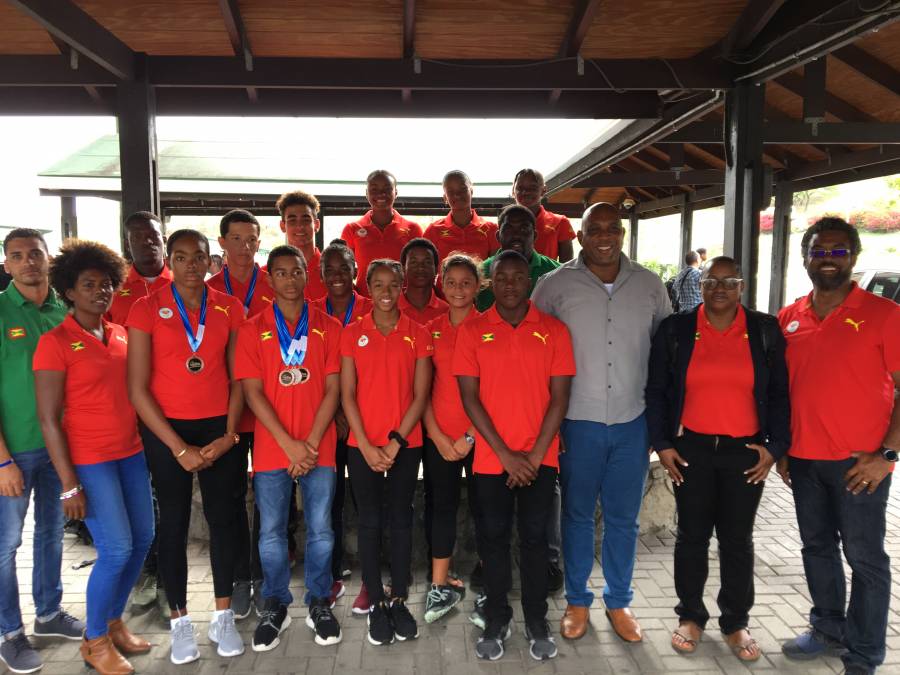 The Grenada National Swim Team returned home on Wednesday following 4 days of the Carifta Swimming Championship in Barbados. On hand to greet the returning team, Curlan Peters of the Ministry Sports extended congratulations to the team on behalf of the minister for their stellar performance.

The team put out an impressive showing by all of its 12 members, with each recording personal best times in addition to the overall haul of 6 Carifta medals. Nathan Fletcher, made his mark at his first Carifta Championship by earning the teams lone Silver medal in the boys 11-12 50M Butterfly. Zackary Gresham exhibited his prowess in the pool with an impressive performance that earned him 3 Bronze medals in the boys 13-14 200M Breaststroke, 50M Backstroke, and the 100M Backstroke. Our 13-14 year old female swimmers Kimberly Ince and Anaika Charles solidified their podium position each with a Bronze medal in the 100M Backstroke and 50M Breaststroke respectively.

Speaking to the team’s performance, President of GASA, Peron Johnson was particularly pleased with the overall results. “Despite several individual injuries which hampered the performance of some of the swimmers, in addition to the continuous disadvantage our swimmers are faced with in the inadequate training facilities, all swimmers were still able to put out Personal Best performances and 10 of the 12 team members advanced to finals in their respective events.

Team Manager Nigel Ollivierre, spoke to the tenacity of the swimmers during the competition, stating that “despite injury, some swimmers were determined to compete and represent their country, however in the interest of their longterm development, the decision was taken to not allow those affected to participate to avoid the possibility of further injury.”

Thanks to GBN’s television broadcast of the swimming championship, many Grenadians were able to witness for the first time our national team competing on a regional platform. It also raised the awareness of the stark contrast in the facilities, which our swimmers train, versus where they must compete.

The team will recover over the next few days before they resume preparation for the upcoming CCCAN and PANAM Games.