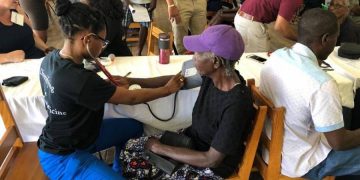 This story was posted 3 years ago
in Community, Health, PRESS RELEASE
3 min. read 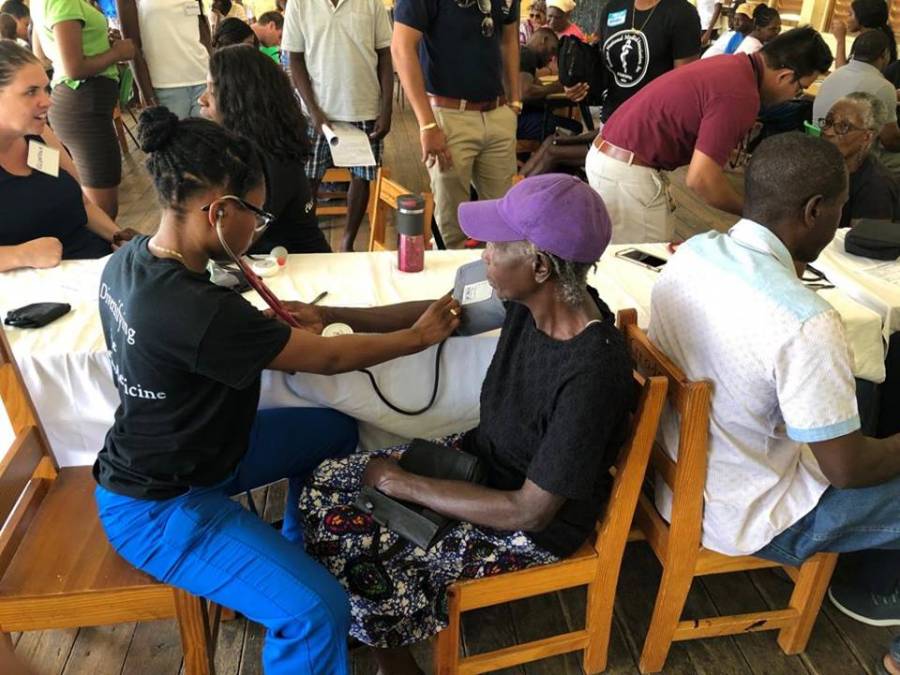 The day after Saraka, on Saturday, 27 April 2019 over 100 residents of River Sallee, St Patrick received free health screening services as a result of the continued partnership between Central Health–Grenada and the Student National Medical Association – St George’s University Chapter (SNMA-SGU Chapter). This year’s event was hosted by the River Sallee Evangelical Church.

Due to its quaint-sized location, the River Sallee Evangelical church secured permission to use the River Sallee Government School. Pastor Alvin Campbell agreed to host the free Health and Diabetic Clinic because he saw it as an opportunity to assist his community. “I know for the community, especially my community at River Sallee, there are a lot of people who don’t go see the doctor. Even though they are sick, they would stay home. But hearing something like a free health fair coming and covering a number of areas, I believe that is the reason why I said adamantly we should go ahead with it.”

Although they offer other services during their tenure in Grenada, this is the 6th event over a 3-year period, that SNMA-SGU Chapter and Central Health – Grenada have collaborated. Michelle Adibe, President of the SNMA-SGU Chapter admitted that travelling so far from campus was a little nerve-racking, however it is part of their mission statement. “Coming out into rural Grenada, and helping these individuals be able to obtain health care that they normally don’t see every day or have easy access, is something that is really important to us – SNMA.”

Founder of Central Health – Grenada Roslyn A Douglas, MA, ACS, ALB said that prior to River Sallee, the SGU medical students have offered the same thing in St David – 3 times; St George – once; and Grenville, St Andrew once also. “The Free Health & Diabetic Clinic in River Sallee was a success because the host church committee Chair – Dianne Roberts was strategic in reaching out to the community group responsible for planning the River Sallee week of activities. They promoted the free clinic along with their plans. In addition, thanks to a private donation, I hired Mr Lett to drive around the community with his loudspeaker to advertise the event – after getting permission from the Commissioner of Police.”

Douglas provided tokens of appreciation to the church’s leaders and volunteers during their Sunday service. “This event would not have been possible without the volunteers from the church. Imagine, they not only walked around the community to promote the event, but they also cleaned up after the Saraka dance which ended at 7 am on Saturday. They did so in less than 2 hours. It is also important to note that SNMA provided the glucose testing strips and lancets, while Bryden & Minors provided copies of promotional materials. This is what love of community is all about.”