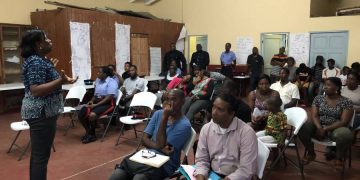 This story was posted 3 years ago
in Education, General News, Youth
4 min. read 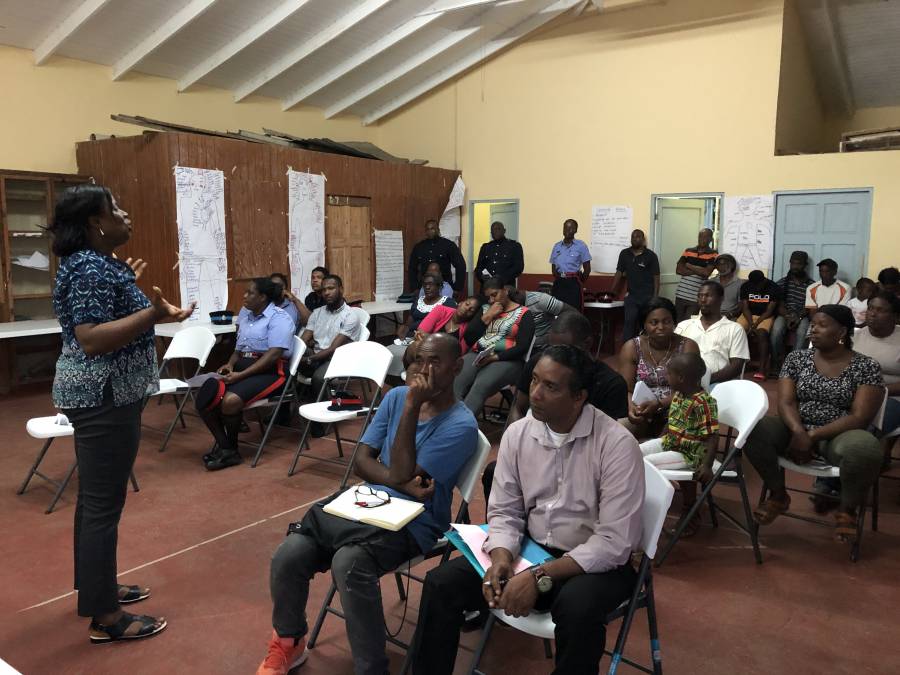 The recent seizure in March of several offensive weapons including knives, ice picks, cutlasses and a ray bone from 8 students attending the Grenville Secondary School, prompted law enforcement to engage the community of Mt Horne, St Andrew where the majority of the students reside.

A town hall meeting with members of the community was held on Thursday evening to hear their concerns and what steps the community can take to assist the RGPF to better police the area. Several members of the rank and file of officers from the Grenville Police Station attended, including Assistant Commissioner of Police Jesmon Prince. The Parliamentary Representative for the St Andrew North West and Minister of Social Development, Delma Thomas, a resident of the community was also present. The initiative is part of the RGPF Community Policing Programme to strengthen the bond between the police and the community.

The Social Development minister started off by first reminding the community of Mt Horne of the need to continue to revamp the reputation of that community which like several other communities have had a stigma attached due to having elements of criminal activity. She indicated that although the dynamics have changed significantly with a lot of good coming from the community, the resurgence of criminal activity, especially among the male youth population, is disheartening. “It is sad that our young men are resorting to walking with offensive weapons to attend school. It speaks volumes of what we have to do as it relates to parents in terms of being alert and paying attention to what our children [are] leaving home with.”

The minister has called for a multidimensional approach to dealing with the issues re-emergence of the elements of criminal activity and Juvenile delinquency within the community. She has put forward plans to establish a mentorship program aimed at having professional men and women with good character to symbolically adopt a child at risk and assist in their development.

“What we will be doing is that we are having a mentorship programme where we provide support for parents so each of those at-risk young boys and young girls within the community will be provided with a mentor who will be assisting them in many ways by following up with them and finding out what challenges they have, assisting them with school and also working along with the parents to deal with the issue.”

Assistant Commissioner Prince believed the town hall meeting could have had a larger turnout from the community. “From the representation, I see here I believe that we could of [had] more [people] more young people attending this town hall meeting, but we were pleased to have the representation we had and the comments that came from the floor were also instructive to us as an organisation that we need to pay a little more attention to what is happening in the community.”

Assistant Commissioner Prince encouraged parents to pay attention to their children more before they go to school as there seems to be a deficiency in the parent-child relationship. He also added that going forward, more parents will also be held accountable to the law about their children’s misbehaviour.

A number of solutions have been raised during the interactive session including having more police presence patrolling the area and having sessions with parents on how to better supervise their children. Concerned resident Nicholson Fletcher is certainly not proud of the latest development with regard to juvenile delinquency within the community of Mt Horne. He called on the fathers to take a greater interest in their children’s lives. “The breakdown of male role models the men in the home this is something that has been lacking for quite a while, but based on the trend that is happening where more females being given opportunities rather than males, this leaves a loophole that has left men behind.”

Although the Grenville Secondary School has garnered negative publicity over the incident, Minister Thomas highlighted several positives and achievements of the school including having Deshonte Thomas a form 3 student participating in the Windward Islands Under 15 Cricket Tournament in Antigua. Shidel John also of form 3 was selected to represent Grenada in the recently held Jean Pierre Youth Under 16 Netball Championship also in Antigua. Many of the school’s achievements can be viewed on their social media page.