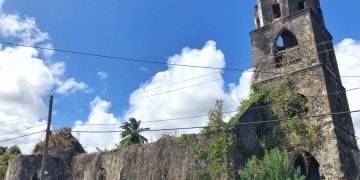 For over 25 years, the restoration of the old landmark Roman Catholic church in Grenville into a cultural centre, museum, and art gallery has been an unrealised dream of the St Andrew’s Development Organisation (SADO).

According to the recollection of one of the organisation’s founding members, Nadia Benjamin MBE, the European Union made available $3 million for restoration projects on the island in 1995, but to date, the project never got off the ground. Benjamin said that $500,000 part funding was received to be allocated for the restoration of the church, while approximately $2.5 million was expected to be spent on Forts Frederick and Matthew, to turn Fort Matthew into a multipurpose tourist attraction centre with a museum and amphitheatre for exhibitions, as was reported in the Grenadian Voice on 28 October 1995.

“The organisation lamented on the fact that we didn’t get the money, but no matter what we said nobody took us on because we knew where the money went, because it came out that it was to be put in the estimates of revenues and expenditure for the next year, and so many years passed and we never got it,” Benjamin said.

The Gothic Revival Style building on Cook Hill Road, Grenville was decommissioned as a place of worship in 1915, 82 years after the first cornerstone was laid on the 4 April 1841, due to mosquito infestation. It was used as a primary school until 1972, when it was again abandoned. Benjamin said it is regrettable that the executive of SADO who followed years later did not continue the advocacy for the restoration of the church, therefore, the dream is now relegated to being just a faded memory.

“Presently the organisation is not as vibrant as it used to be, so I don’t think with all that is happening, they will not be able to take on that project, but at the time the only thing we had to do because we were doing the outside work and everything, it was just the roof we had to fix and when the hurricane came it threw down the roof and then we couldn’t find the money after we heard that the money went into the government’s coffer and was put in the estimates of expenditure for the next year. We never got it.”

Benjamin, whose deceased husband, Reynold Benjamin was elected the first President of SADO, said the old church is not the only historical site that needs urgent attention.

“Not only the old church, but we need all our historical sites to be developed. In St Andrew, we have a lot of historical sites. I remember the Pearls Airport and the Amerindian site, there was a big meeting some years ago and people from all over the world came to the meeting and Leslie Pierre was one of the leaders at the meeting and the idea was that they will develop that Amerindian site and make the Pearls airport there one of the big things in Grenada. Dr Keith [Mitchell] Came on board and he said that they are going to develop the site, and nothing happened.”

Despite the former SADO member saying that the EU funding for the restoration of the church was received by the then government led by the then Prime Minister Dr Keith Mitchell, the Ministry of Finance stated otherwise. An email received from the Press Secretary, Office of the Prime Minister, Philomena Robertson in response to an inquiry made by NOW Grenada into the whereabouts of the funds, stated that, “It is my understanding from consultation with the Ministry of Finance that the digital database does not show the receipt of this particular pledge. However, the ministry is reviewing its physical records. The ministry will be in a position to provide a further update when this review is complete. You would appreciate that given the time that has elapsed, 1995-2019, this would mean having to peruse a lot of records. Therefore, a specific timeline for completion cannot be provided at this time.”

Benjamin is still hopeful that the project will be revitalised as it can boost the economy in the big parish which continues to be neglected. The present deteriorated state of the church still holds much historical significance in the town of Grenville. Before being built in its present location, the first Catholic church was located in Marquis, but it was the foresight of Father Angelo Leoni, the first parish priest that decided to relocate the church. Father Leoni died in 1846 without completing the roof of the church, which was due to funding issues, and is said to be buried beneath the altar of the church. His unfinished work was later completed by Father John Andrew Wall in 1858 who died in 1863.

Venezuela is a Caribbean concern