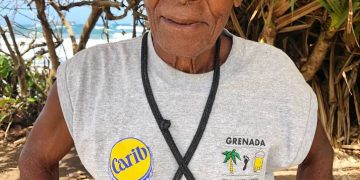 This story was posted 3 years ago
in Feature, Lifestyle, Video
5 min. read
Share

Telfor Bedeau, described as Grenada’s Indiana Jones, and the country’s greatest hiker in a 2013 National Geographic Traveller news article, hopes that his ageing body will permit him to complete one last hike of Grenada’s highest peak, Mt St Catherine.

Bedeau, who is nearly 80 years of age, has made his mark in history for his ambitious feats of courage and endurance. He circumnavigated the island with his kayak covering 1,000 miles, (which he ticked off in April last year) and climbed Mt St Catherine 217 times. He has rowed around Grenada, first in a clockwise direction in 1988 that took just a little over 24 hours and years later rowed anticlockwise in two boats named Seahiker 1 and 2, which he built by his own hands.

He has lost some mobility following an injury to his right knee sustained while making a decent from Mt St Catherine, but despite still recovering from his injury, and having to use two sticks to walk, he believes this will not slow him down as he prepares to climb Mt St Catherine for his 80th birthday on 15 October.

“If I am still fit as I am now, I plan to do it for my 80th birthday, which will be in October coming so maybe I will have to crawl on all four [legs] or on my belly or something but I am planning to try.”

Bedeau has also climbed Soufriere in St Vincent and other terrains in Bequia, Mustique, Canouan, Union Island, Mayreau and Carriacou, and Petite Martinique. His love for hiking started in 1962 after Bedeau and 3 of his friends in his home village of Soubise decided to hike to the historical site of Fedon’s Camp which today is considered a popular destination for hikers. He remembers the conversation he had with his friends, particularly with Robert Millette and Eugene M Pursoo, two former Grenadian Ambassadors to the United Nations whom he shared a similar interest with, as they were fond of reading books on adventure and expeditions. He said their attempt at climbing to Fedon’s Camp led to them attempting to make another ambitious journey from Fedon’s Camp to Grand Etang.

“Eventually we got the trail going up to the mountain, and it was one of the loveliest things we have ever done, it was so nice, and we got so adventurous we tried to extend the journey to go to Grand Etang. We could see Grand Etang but we did not know how to get there, but seeing Grand Etang ahead we thought well we can just go in that direction but we got into the forest and we realised that we were going around in circles.”

Their first experience of getting lost on their way to Grand Etang from Fedon’s Camp did not deter them from hiking as he said this taught him the skills on how to navigate. Now he has the bragging rights of having climbed every mountain trail and pathway in Grenada and, in an attempt to make his hiking adventure more interesting and more ambitious, he has claimed to have hiked from Sauteurs to St George’s without crossing any rivers. He has dubbed this the major climax of his hiking career.

“That idea created a big problem for everybody as to how is that possible, it has so many rivers in Grenada, how can you do that? You have to cross the rivers while some suggest we have to pass on the sea coast, but what they didn’t know was that I did geography and contour mapping and so on and I know the island has a backbone like the ridge of a house. Rain falling on the mountain backbone, some water flow on one side while some flow on the other side and in the middle, there is no river. It is not straight forward like the ridge of a house, it zig zag but you use the contour map to follow the trail, but it took us 4 days from Sauteurs to St George’s.”

Enjoying his golden years, Bedeau reminisced about his accomplishments and many of the experiences he shared as a young boy who dropped out of the St Andrew Anglican Secondary School after just 3 years, having given in to the thirst for adventure. He first started off as a sailor for a number of years, tried his hand at being a land surveyor and worked in England as a railway worker for one year. Despite having left secondary school prematurely, he still managed to find time to be self-taught in ocean navigation and was able to use that skill on land to assist him on his hiking expeditions.

While attempting to hike Mt St Catherine for the 218th time might be his most impressive on record, this is not his only attempt at setting another record as he has also decided to Kayak around the island to clock in an impressive 1,500 miles under his belt but has promised that if he is still in good health will attempt to complete the goal of making 2,000 miles.

“This year I am just a few miles to achieving 1,500 miles kayaking, in rowing, I haven’t got the exact figure, but I did roughly 6,000 miles in rowing over the years,” Bedeau said.

Bedeau is considered a local celebrity and has been featured in several international news articles. He believes that paying attention to his overall health through constant exercise and a proper diet has allowed him to have the strength to endure extreme hiking trails, and he hopes the younger generations can take an example from this.

“One of the things I always look back and say I am glad that I grew up with my grandmother who was of East Indian descent and she cooked East Indian food mainly and the type of food there was no big set of fats, or no big set of seasoning… after she died… I continued eating as sensible as I want and drinking a lot of clear water… and exercise of swimming, rowing, kayaking and walking.”

Given his most recent accomplishments over the years, Bedeau will solidify his mark in history as Grenada’s first and oldest hiker to climb 2,760 feet above sea level, over 200 times.

NOW Grenada is not responsible for the opinions, statements or media content presented by contributors. In case of abuse, click here to report.
Tags: curlan campbellfedon’s camphikingkayakingmt st catherinesoufrieretelfor bedeau
Next Post