This story was posted 2 years ago
in Education, PRESS RELEASE
3 min. read 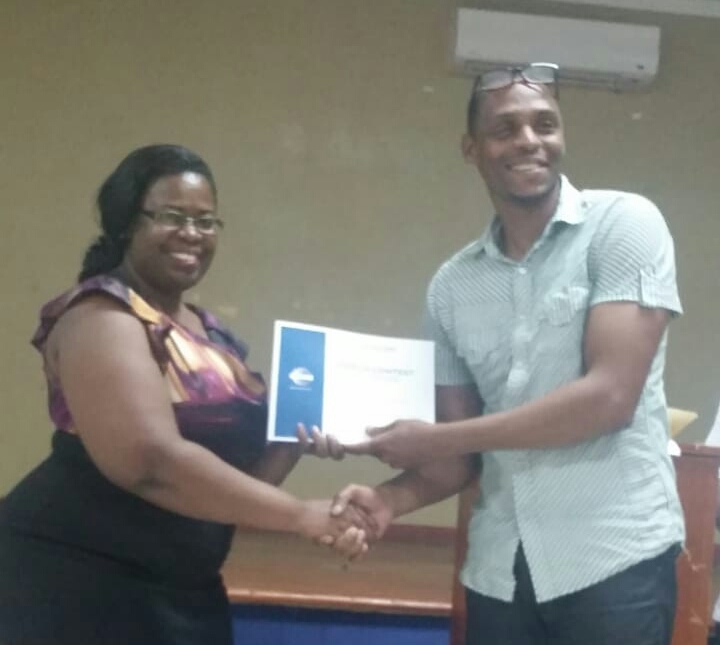 The Toastmaster movement in Grenada is growing, and on Saturday,13 April 2019 Clubs that make up Area 34 and 35 battled it out during the Grenada Territory – 2019 International Speech & Table Topics Contest, held at Norton Hall – St George’s.

In order to qualify for the Grenada Territory Contests, these contestants had to be successful at the home club’s speech contest and in their respective Area’s speech contests.

When asked how he felt about winning the International Speech Contest, Toastmaster Ledlow said, “Elated and proud, best describe my feelings. Excited, because I am still relatively new to Toastmasters and this [contest] pushed my limits. I am also proud and thankful for the support I received from members of the Spice Isle Toastmasters Club.”

Toastmaster Williams-Prince was Conception Toastmasters Club’s double threat in the contests as she competed in both the International and Table Topics Contest. In addition to winning the Table Topics Contest, she placed second in the International Speech Contest, “I feel eternally grateful, firstly to my fellow Toastmasters whose words of encouragement and advice were timely and soothing. Secondly, to myself – for believing in me.”

Area 34 and 35 are overseen by two Area Directors. Cemal Copland, Area Director for 34 was beaming with pride over Toastmaster Ledlow’s victory. AD Copeland considers the Toastmasters Speech Contest as significant, “Many of us are overcoming fears of public speaking and trying to gain a fair awareness of our self-esteem and potential. Personally, and observing contestants through the years, there is a tremendous leap in confidence and ability by those who participate in the Speech Contests, and it carries over into their daily lives.”

Area 35 Area Director, Roslyn A Douglas, elated by the overall success of the event, vouches for the Toastmasters’ educational programme said, “Now is the time. Now is the time to join a Toastmasters Club in Grenada. Toastmasters has a new educational programme called Pathways which offers 10 options ranging from Presentation Mastery to Leadership Development. This, plus the merit of the internationally recognized organization will help you, as it has helped me and the contestants become competent, professional and comfortable public speakers and leaders.”

Grenada can also boast of another success coming out of Toastmasters. The Division F, Division Director responsible for overseeing a combined 35 Clubs in Grenada, Trinidad and Guyana is Grenadian Alison Carvel Lett. The District Level Officer for Toastmasters International believes participating in speech contests provides speakers with the opportunity to improve their speaking skills, “Territory Grenada Speech Contest is very important to the sustainability of the Toastmasters Movement in Grenada, as it allows for all the clubs in Grenada to meet as a collective and interface. It sharpens their listening skills as well as ability to evaluate each other.”

Toastmasters International is a non-profit educational organisation that teaches public speaking and leadership skills through a worldwide network of clubs. Headquartered in Englewood, Colorado, the organisation’s membership exceeds 357,000 in more than 16,600 clubs in 143 countries. Grenada has 7 clubs, including one in Carriacou.