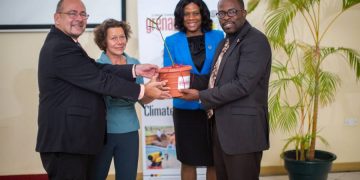 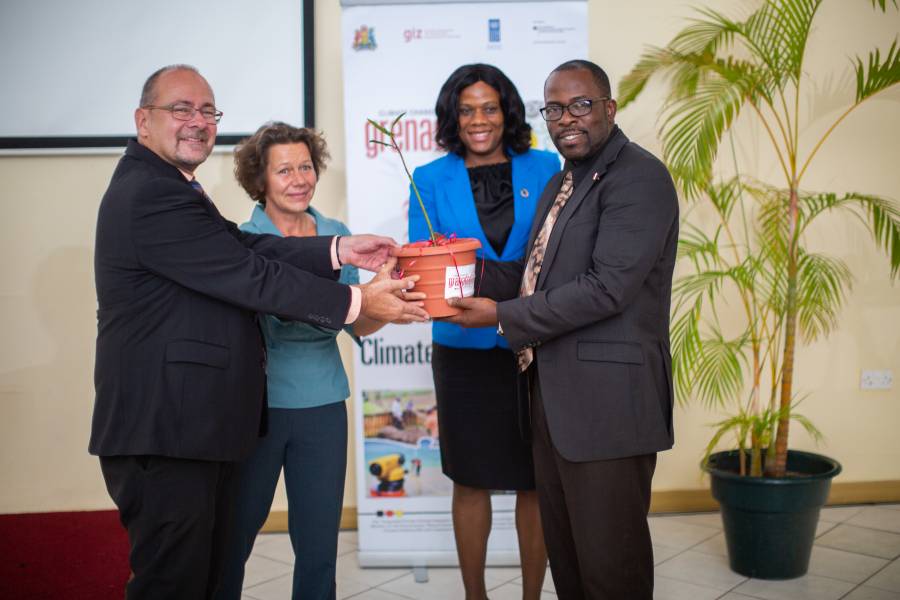 Dieter Rothenberger and Verena Blickwede of GIZ hand over a symbolic mangrove plant to Sen. Hon Minister Garaway and PS Hutchinson of the Ministry of Climate Resilience
Share

Tuesday, 21 May saw the official closing ceremony of the Integrated Climate Change Adaptation Strategies programme, which became better known under its acronym ICCAS.

ICCAS was funded with 6.8 million Euro (EC$20 million) by the German Federal Ministry for the Environment, Nature Conservation, and Nuclear Safety (BMU) under its International Climate Initiative (IKI). It has been running in Grenada since April 2013 and has been jointly implemented by the Environment Division, GIZ and until July 2018 also the United Nations Development Programme (UNDP). The programme, which aimed at increasing Grenada’s resilience to climate change, included 4 components: mainstreaming adaptation, improving resources planning and management, a Community Climate Change Adaptation Fund, and enabling access to finance and knowledge management.

The programme was a first of its kind for the Government of Germany which, until now, had only considered regional projects. A bilateral arrangement was quite a novelty. ICCAS was originally meant to end in October 2016, but it benefitted from a number of extensions due to its success at implementing deep-rooted changes on the ground.

ICCAS‘s impacts, for a single project, were broad and far-reaching. During her speech, Aria St Louis, head of the environment division, who was also the ICCAS’s counterpart for the Government of Grenada, endeavoured to cover ICCAS’s main achievements in capacity building within government, private sector and civil society, mainstreaming of climate resilience throughout government sectors and building community resilience to the changing climate and its negative impacts.

Documentation of lessons learned and best practices can be found on the Grenadapt YouTube channel www.youtube.com/channel/UCb9KRCExkZROCYcWNP9dVrQ. The Grenadapts Facebook page is currently hosting a campaign #ICCASlegacy to celebrate ICCAS’s achievements. www.facebook.com/Grenadapts

But overall, the ICCAS legacy will be dominated by its ability to improve Grenada’s access to climate finance. Dieter Rothenberger, Head of Project for GIZ explained that throughout its lifetime, the project acted as a docking station for other projects to bring more support to Grenada’s adaptation ambitions in several sectors, from health to waste management and water security, etc. It has also secured 2 critical Green Climate Fund readiness projects which open the way for Grenada to access the world’s largest source of climate finance (www.greenclimate.fund). Through ICCAS, Grenada was the first country in the region to gain approval from the Green Climate Fund on a sole-country project: the EC$125 million Grenada Climate Resilient Water Sector which will start its implementation this summer with Nawasa, the Government of Grenada, Grenada Development Bank and GIZ.

The impacts of climate change on a small island like Grenada can be devastating. As such, Sen. the Hon. Winston Garraway, Minister with responsibility for Disaster Management and Information at the Minister of Ministry of Climate Resilience, the Environment, Forestry, Fisheries, Disaster Management and Information outlined in his keynote address that, as a country, Grenada knows about the destruction of hurricanes or the pressure placed on the nation by severe droughts and flash floods. We also worry about our coastlines, our main tourism product, which is subjected to sea level rise and coastal erosion. Therefore, as these events are predicted to increase in the coming years, Grenada needs to continue on its adaptation path, mapped and laid under the ICCAS project. Grenada must also do good on its commitment to reduce emissions, to be a part of shaping a better future for our planet. The only one we have.

The event, which also included inspiration speeches from Roxy Hutchinson, Permanent Secretary (Ag.), Ministry of Climate Resilience, the Environment, Forestry, Fisheries, Disaster Management and Information, Merina Jessamy, Permanent Secretary, Ministry for Implementation and Verena Blickwede, Regional Director Caribbean, GIZ, featured several entertainment breaks. It included a pan performance of the national anthem by Pan Wizards, a testimonial movie “ICCAS was for me”, a music video of Eclipse, Swipe and Avvoni’s now well-known “Can’t do this alone” – ICCAS’s theme song and, not least an original monologue about climate change and the resilience of our island by Richardo Keens-Douglas.

NOW Grenada is not responsible for the opinions, statements or media content presented by contributors. In case of abuse, click here to report.
Tags: climate resilient water sectorgizgreen climate fundiccasministry of climate resilience
Next Post