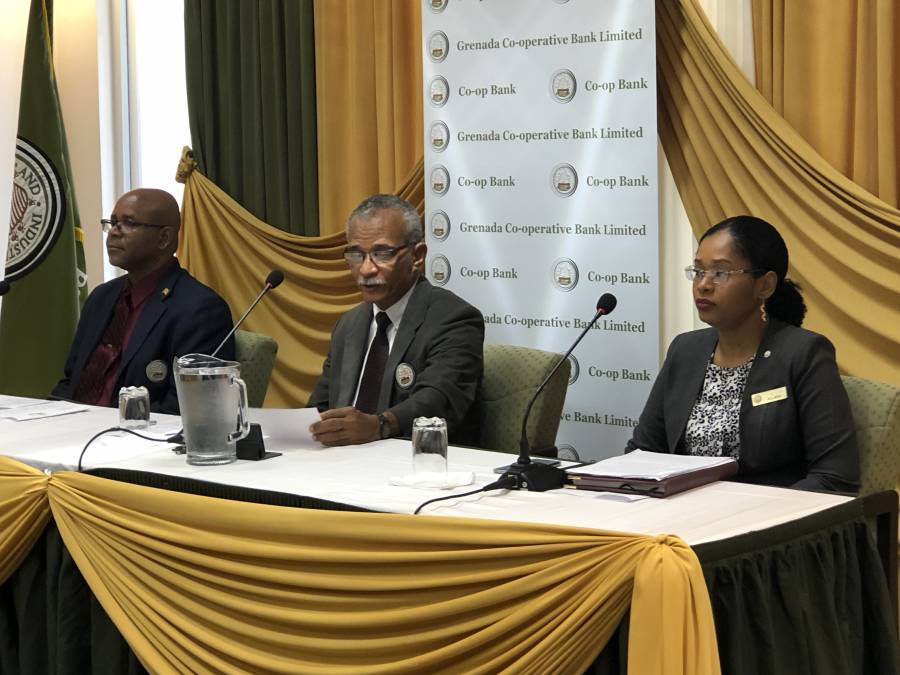 The Grenada Co-operative Bank Limited (Co-op Bank) has come a long way from the days when it was referred to as the “Penny Bank”. According to Chairman of the Board of Directors Darryl Brathwaite, Co-op Bank has reached the billion-dollar mark in assets and deposits. This solid financial performance was recorded for the first half of 2019 and is synonymous with its announcement of a new Strategic Plan “Vision 100” for the period 2019-2021.

During the bank’s press conference to highlight its Half Year performance, Brathwaite stated that unaudited net profit after tax of $5.9 million was recorded for the first half of 2019 which represents an increase of $1.8 million or 44% of last year’s comparative. Growth in Grenada’s economy has been attributed to the strong financial performance recorded by the bank. “Total assets grew by 6% over the first 6 months and now stands at $1.12 billion. Customer deposits stand at $1.01 billion, an increase of $56 million from the $955 million recorded at the last reporting date,” he said.

As the financial space remains competitive, the bank has outlined its new strategic plan “Vision 100” developed following its annual Strategic Planning Retreat which will focus on:

Following projections of a 4.5% growth in Grenada’s economy from the Caribbean Development Bank (CDB), Acting Executive Manager of Finance at Co-op Bank Allana Joseph, stated that this growth in Grenada economy has certainly fuelled the bank’s growth, making them the leader in deposit market share among commercial banks. However, she added that while the bank can boast of having over a billion dollars in assets and deposits, liquidity in the banking system remains high and still requires prudent financial management.

“On the flip side, the growth in the deposits in the banking sector brings an additional dimension which involves the effective management of the excess liquidity to ensure that we give the best return to our shareholders while we manage or ensure safety and that where your creative and strategic management comes to play,” said Joseph.

The drawback regarding the existence of excess liquidity within the banking system, Brathwaite said, has caused loan rates and deposit rates to decrease. He said customers should expect these rates to remain constant therefore prompting the need for the bank to find alternative ways at making money from money.

“You should not expect deposit rates to go back up in the current environment and in fact, we have to look for alternative means of supplementing that loss from deposit interest income because that is the reality of today’s world,” he said. “When we were a fledgling economy you were trying to encourage people into the saving mentality so you had to put a sort of premium on deposit interest rates to encourage people to save but now we are mature, we have to look at other ways that money can be made from money, and deposit rates will have to fall to its natural levels that the market can sustain.”

Co-op Bank is also particularly keen on staying ahead of the curve over the announcement of the merger of Scotia and Republic banks. Managing Director Richard W Duncan said the bank’s strong financial performance will coincide with an enhanced dividend being paid out to shareholders for the 2019 financial year.

Meanwhile, the bank has stated that high operating costs for banks are expected to continue into the near future due to changing regulatory and compliance requirements. The environment is also expected to become even more competitive as commercial banks, credit unions, and non-bank financial institutions compete for business from our slowly recovering economy.