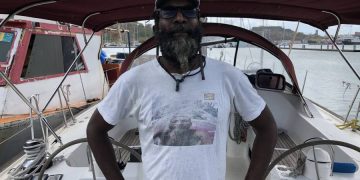 This story was posted 3 years ago
in Video, Watersports
4 min. read
Share

Sailor Joel “Captain Jex” Mark of Grenada prepares to mimic the success of Teddy Seymour by becoming the 2nd man of African descent in the Caribbean to circumnavigate the globe.

Seymour, from St Croix in the United States Virgin Islands achieved such a feat on 19 June 1987, as the first Afro Caribbean person to solo circumnavigate the globe. Likewise, Captain Jex is determined to achieve his goal after an incomplete first attempt in 2016 due to financial and other constraints, including not having a proper sailing vessel.

Nearly 2 and a half years later the avid sailor was able to have in his possession a 47 Ft Beneteau SA sailboat, which is considered as a major upgrade taking into consideration that Mark was able to complete two North Atlantic crossings with his worn and torn 26 feet long sailboat called “Ga’ Sietoe” which had primitive navigation tools. He intends on renaming his new vessel the Ga’ Sietoe 2.

“This is a much bigger boat, the accommodation, and advantages I have here I didn’t have it back then because I didn’t have an inboard engine but this one has an inboard engine. This one has proper sails, which was the biggest challenge for me was not having proper sails and that is a plus for me because I will be able to navigate my way into tight spaces or against the current, especially when pressing for time and when it comes to navigation. I only had a handheld GPS before which does not have any mapping so this is all a plus,” said Mark.

Mark is set to begin his odyssey at sea at the end of May 2019 and if successful, will see him covering over 20,000 miles single-handedly. He has dubbed his 2nd attempt as the summit of his maritime ambitions after being inspired by a dream in 2015. He is expected to depart Grenada through the North Atlantic for his intended tour of Europe after which he is expected to sail through Mediterranean Sea, Indian Ocean, South China Sea, North Pacific Ocean through the Panama Canal and back through the Caribbean Sea to finish where he started.

“Give or take you can always set a time, but weather-wise and circumstances basically I hope that it will take me about 20 days give or take with good weather to get to the Azores and then… in the middle of June I should be in the UK. So basically, the time span I am looking at, is a year and a half, two years, depending on the number of stops I am willing to make and the elements,”. Mark told NOW Grenada.

In order to complete his mission safety, the demand for the voyage will require sleep deprivation as he channels through treacherous waters. However, Mark said the hardest part of the journey will be the solitude. He remains encouraged as he set his eyes on the ultimate goal of inspiring and motivating young and upcoming sailors to achieve great things.

“The outlook basically of my journey, my achievement is to inspire and motivate and empower. This is my motto and I look forward to continuing to do that and I look for the support of everyone.”

During his previous tour of Europe, Mark was also on a mission to raise £10,000 to fund his expedition but also solicited support to help establish a school to teach underprivileged youngsters on the opportunities available in the yachting sector. Despite lacking corporate sponsors, Mark still hopes to receive support and has asked that people continue to show their support by simply sharing his story with others.

“The most fundamental part of this supportive initiative is financial because to cover the world, there will be bills to pay — docking, repairs, and the supply of food and fuel — all that will be necessary for the journey moving forward. Then the second most important is the support of my people or everyone who is interested [in] new achievement and the betterment of other people. The simple thing to do is to share the video, share the information by whatever channel or avenue with anyone who you think might a potential candidate to be able to support financially,” he said.

On his first attempt, Mark spent 52 days sailing, finally arriving at the Azores on 1 September 2016. Attempting to venture further, his trusted vessel Ga’sietoe sustained damages and due to adverse weather conditions, he was forced to abort his mission.

NOW Grenada is not responsible for the opinions, statements or media content presented by contributors. In case of abuse, click here to report.
Tags: circumnavigationcuran campbellga’ sietoega’sietoejoel marksailingteddy seymour
Next Post

IMF predicts 3.5% growth for 2019 and calls for a rebalancing of jobs opportunities