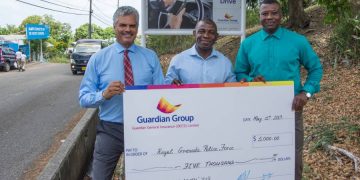 This story was posted 3 years ago
in Business, Community, PRESS RELEASE
3 min. read 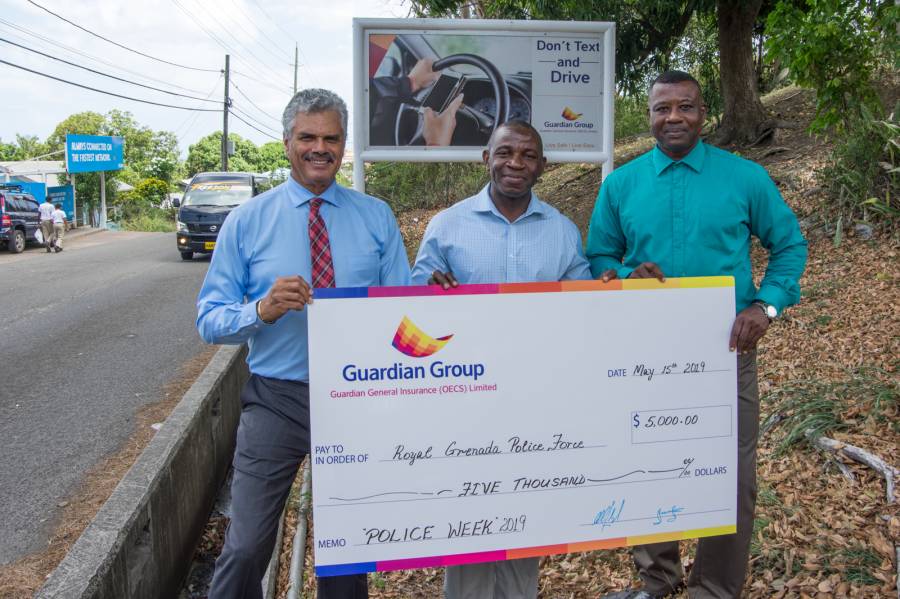 The annual event of Police Week is to be held 9-15 June and is themed “United We Stand to Fight Against Sexual Abuse and Violent Crimes, While Promoting Road Safety and a Healthier Lifestyle.”

At a cheque handover, which fittingly took place under the Guardian General Insurance (OECS) Ltd, ‘Don’t Text & Drive’ billboard, in Springs, the Chairman of Police Week, Supt. Glen Paul and Deputy Chairman Supt. Dunbar, received EC$5,000 from the company, for the many activities scheduled to take place for June 2019.

Guardian General Ins (OECS) Ltd. one of the islands leading insurance companies, has been visibly placing more and more emphasis on the aspect of safe driving.

Ronald Hughes, Managing Director of GGOECS Ltd. in handing over the funds to the Royal Grenada Police Force (RGPF) commented, “Whilst all the issues encompassed in the theme for the week are extremely relevant, as an insurance company, we have really been focusing on matters of road safety issues and vehicular accidents. The effects of these are further reaching than most people might think. There are individuals involved, insurance companies and even our economy as foreign exchange leaves the country to get the parts required for repairs. In addition, there are the sad incidences of persons being hospitalised, or requiring time off work to recover after an accident, the more you think on it the longer the list of repercussions grows. We received statistics from the RGPF which show showed an alarming average of 7 road accidents per day in 2018! Drivers and pedestrians all need to put road safety standards into practice. A simple thing like having some patience and extending the road courtesies we were taught when learning to drive, could make a significant impact on these numbers.”

On receipt of Guardian’s donation Supt. Paul stated, “On behalf of the Commissioner of Police and the Police Week Committee 2019, we would like to extend our profound thanks to Guardian General for their generous and continued sponsorship. These funds allow us to provide an opportunity for the police and the community to interact in the furtherance of the overall community policing strategy agenda, of reducing crime and the fear of crime.”

The RGPF Superintendents were also pleased to share that the 2019 Police Week includes not only HM Prisons, who joined the 2018 activities, but has now been extended to encompass Customs and Grenada Airports Authority. With the growth in participants, which also includes foreign athletes from Antigua, St Vincent, Trinidad, Guyana, expectations are high and the police force is working on improved coordination in their approach to corporate sponsors, so that all of the planned events can realise the necessary funding requirement.

The RGPG wishes to share that the purpose of Police Week is to strengthen partnerships with the community and to build camaraderie among members of the organisation by engaging in community projects, games and sporting events, with community involvement. The main objective is to fight and reduce crime and to build public confidence.

With the harrowing issue of sexual abuse very much in the forefront of the public’s mind the RGPF has stated that part of its main objective is to create further national awareness by working with NGOs and community groups, fostering better relationships with agencies which deal with the issues.

A packed week of activities will include Open house – most of the departments will display their equipment to the general public at the central police station; best drills competition; a health fair and healthy lifestyle activity; sexual abuse, violent  crime and road safety workshop; finals of a number of sporting activities – cricket, football, netball, table tennis, talent shows and more.

NOW Grenada is not responsible for the opinions, statements or media content presented by contributors. In case of abuse, click here to report.
Tags: guardian general insurancepolice weekronald hughes
Next Post