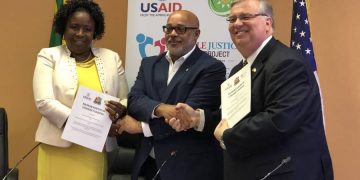 This story was posted 2 years ago
in General News, Law, Youth
4 min. read 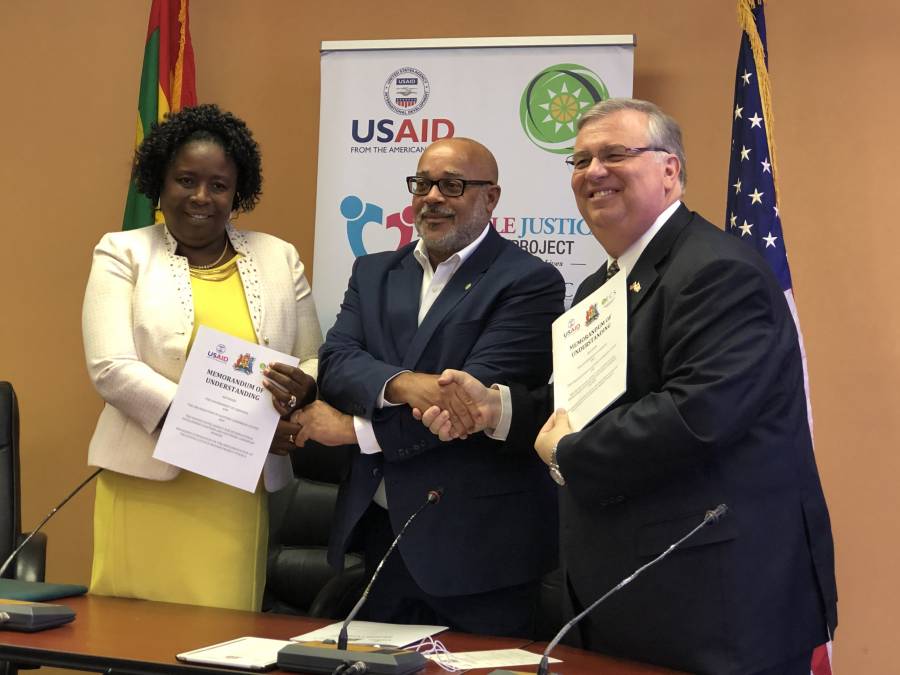 The minister made the promise as Phase 2 of OECS juvenile justice reform project (JJRP) II begins to unfold in Grenada. “As a government, we are committed so we are not only going to use the funds and after the end of the funding cycle, the project or the programme [goes] to the ground. As a government, we are going to put our money where our mouth is… and we will work to ensure that we provide juvenile justice reform.”

On Tuesday the Government of Grenada, the OECS Commission, and the United States Agency for International Development (USAID) each signed Memorandum of Understanding which will see the strengthening of the juvenile justice systems through appropriate reform measures that will ultimately lead to law reforms that help support the reintegration of Youth in Conflict into society. The Juvenile Justice Reform Project (JJRP) II is being implemented in 6 independent territories of the Eastern Caribbean namely: Antigua and Barbuda, The Commonwealth of Dominica (Dominica), Grenada, The Federation of St Kitts and Nevis (St Kitts and Nevis), Saint Lucia and St Vincent and the Grenadines.

USAID began supporting child justice reform in the Eastern Caribbean under a first phase of the JJRP, which began in 2011 and concluded in 2016. Now with the start of phase 2, it is expected that this phase should be completed by 30 September.

In 2011 the Juvenile Justice Reform Project (JJRP) was approved by USAID with funding of US$5.8 million with US$1.6 million in counterpart funding from Countries and the OECS Commission. The first phase of the project yielded significant results especially for the development of the Grand Bacolet Juvenile Rehabilitation and Treatment Centre. These results include:

HE Dr Didacus Jules, Director General OECS Commission stated that in order to properly addressed the issues of juvenile delinquency, the government must take a scientific approach in understanding behavioural patterns and how one’s environment affects their upbringing. He said there are factors including the psychological effects of abuse that are not factored in when devising plans and programmes to help curb juvenile delinquency.

Dr Jules has agreed that the testimonials stemming from youth involvement in the various programs of the projects have been very encouraging and this has prompted the OECS Commission to compile those testimonials into a documentary at the end of the project.

Principal Officer US Embassy, Stephen Frahm was quite pleased to have the 2nd phase of the project rolled out in Grenada. “This MOPU symbolises the importance of the JJRP’s work in Grenada and the critical partnership that serve as the foundation for achieving its objectives. Delinquency, violence, and crime are often complex and controversial issues, the challenges they present requires the partners combined expertise and resources to determine the appropriate and relevant solutions based on evidence and best practices.”

There were 4 project objectives under the first phase of the programme:

(1) Improving the legal and regulatory framework of the Juvenile Justice System;

(2) Building capacity for the effective administration of juvenile justice;

(3) Modernisation of diversion, detention, and rehabilitative processes in the Juvenile Justice System; and

(4) Improving linkages with civil society and other supporting structures to strengthen the Juvenile Justice System.

The second phase of the project JJRP II will build upon the earlier child justice reforms and optimise the impact of the project in the remaining period of implementation — less than 3 years. The main goal of the JJRP II project is to lead to:

Meanwhile, the Ministry of Social Development, Housing and Community Empowerment has also established a juvenile justice unit within the ministry through the support of USAID.