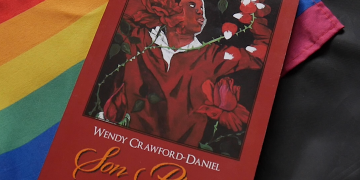 This story was posted 2 years ago
in Arts/Culture/Entertainment, Lifestyle, Video
4 min. read
Share

Dexter painfully listens to his father’s last words. “I am dying a sad man… You have broken my heart. I always knew you were one of them.” – An excerpt from a new novel by Dr Wendy Crawford–Daniel highlighting the gay, lesbian and bisexual struggle in Grenada which helps start the conversation about social justice and human rights issues among people of the LBGTQ community.

“Son Rising”, although fictional, chronicles the lives of several people within the LBGTQ community by capturing combined experiences of discrimination and daily struggle, both internally and with family and the wider community, while keeping their identities secret.

Crawford–Daniel manages to compile their stories through a single fictional protagonist Dexter Lovelace as he journeys through life’s challenges following the death of his father. At birth, he was regarded as the pride of his father’s eyes and his dying father’s last words “I always knew you were one of them” are embedded in his psyche.

But to understand what led her to write such a novel, we must first understand her background especially in the field of sociological research as a social scientist. Dr Crawford–Daniel is considered a leading Caribbean social scientist, with a passion for research on socio-cultural issues. She is currently a professor at the St George’s University, Department of Humanities and Social Sciences. After one of her lectures discussing the current state of homophobia in the Caribbean, a student related the story of his gay identity. This sparked her interest and led her to interview over 30 individuals who identified as either gay, lesbian, or bisexual.

“My particular interest is social justice and I am very concerned with issues of self-determination, very concerned with issues of human rights and social justice, and so I got quite a bit of material from all the interviews and I started thinking about what can I do with it. What came to mind for me was to compose a fictional character from all the stories so that I can convey the information,” said Crawford–Daniel.

The novel, she said, also showed another dynamic where the protagonist’s mother was not complicit in degrading her son, and did quite the opposite to his father by showing love and support. She said this is a typical example of the dynamic at play in the lives of many homosexuals in what she described as a homophobic society, and “where self-image seems to be more important than parenting.”

She added that these experiences can have a lasting effect on people as many encounter harassment and ridicule. In her own words, the novel seeks to tackle “difficult sociological concepts and controversial socio-cultural issues, in a non-threatening, captivating manner, to convey knowledge, stimulate critical thinking, promote social justice, and harness greater appreciation and respect for the diversities in society.”

In a society where discussing one’s sexuality is considered taboo, the budding author says her book is not so much intended for people who identify as gay or lesbian, but for heterosexual people operating in a Christian conservative society. “It is really for heterosexuals to see for themselves because there are a lot of misconceptions about homosexual [people], a lot of unfounded misconceptions and hearsay.”

She added, “What my research has taught me [is] if you take the time to listen to people’s story and speak to people, the real humanity comes out… we paint this demonic curse on people who do not share your sexuality if you are a heterosexual and as a result, we develop a lot of barriers, and not realising that’s what we are doing… the level of discrimination and the sort of emotional and psychological and physical pain that we are putting people through because of that discrimination.”

Crawford–Daniel believes her book will start the conversation surrounding what it means to be a homosexual by challenging societal constructs such as masculinity, sexuality, and social acceptance in a diverse society.

The book published by Xlibris, a leading self-publishing company, is now available at Barnes & Noble and on online platforms such as Amazon. She hopes to make her book available on shelves in select bookstores on the island as well as to conduct book signings. This is her second novel, her first “Unveiling Island Passion” explores a fictional love story between an island man from Grenada and a Kansas woman in the 1950s.

Police confirm the death of a St David resident