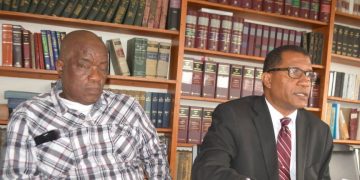 This story was posted 3 years ago
in Law, Politics, Technology
3 min. read

The revised Treaty of Basseterre states that the use of a driver’s licence, voter registration card or a national ID card can be used to travel throughout the OECS territories. Based on the recent judgment handed down by the Caribbean Court of Justice (CCJ), a Caricom passport is the only proper means of identification for Caricom nationals to trigger Freedom of Movement rights under article 45 of the Treaty of Chaguaramas.

Delivered 29 May in Grenada at the No 1 High Court, via videoconference, the CCJ dismissed the David Bain claim against Trinidad & Tobago for breach of freedom of movement rights when he was denied entry on 14 December 2017.

In the case of Bain, upon arrival into Trinidad & Tobago to attend a wedding, he presented his US passport to immigration officials, although being a Grenadian with dual US citizenship, but was denied entry after being interrogated for having a previous drug-related charge, which he vehemently denied.

Following his questioning, Bain, who was not able to provide his Grenadian passport which at the time had expired, provided his Grenadian driver’s licence and his voter identification card, as evidence of citizenship. He detained overnight and sent back to Grenada.

The court ruled that although Caricom citizens have the right to freedom of movement, in order to exercise those rights, proper evidence of nationality in the form of a valid passport only must be shown. The court determined that although there was no doubt that he was, in fact, a Grenadian, Bain did not provide sufficient documentation to prove his nationality to the Trinidad & Tobago immigration at that particular time, even though his other forms of identification proved nationality, including his US passport.

“I feel a little bit hurt,” said Bain, “I feel that as a Grenadian and a member of Caricom that [this] kind of limits me and limits my [freedom] of movement, because any Caricom member should have been able to travel the Caricom with whatever ID that will be enough to identify them.”

Ferguson stated that there was no due process in the case of Bain’s mistaken identity for having a criminal record for narcotics. “There was no due process we contend before sending him back. Trinidad, of course, had a different version to the story but there you are landing in a country almost midnight and being sent in the wee hours of the morning with little or no investigation done.”

The CCJ did however rejected the claim by the attorneys representing Trinidad and Tobago that Bain waived his right to free movement, as a national of Grenada, when he presented his US passport.

David Bain’s case is the second to be brought to the CCJ in its original jurisdiction, but the first case to be granted leave to bring the action against Trinidad and Tobago.

NOW Grenada is not responsible for the opinions, statements or media content presented by contributors. In case of abuse, click here to report.
Tags: caribbean court of justicecaricomcurlan campbelldavid bainfreedom of movementrevised treaty of chaguaramasruggles fergusontreaty of basseterre
Next Post