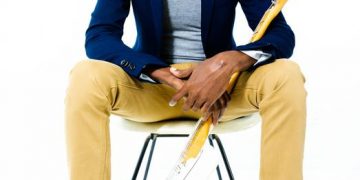 This story was posted 3 years ago
in Arts/Culture/Entertainment, Video, Youth
5 min. read
Share

At the age of 28, Grenadian jazz guitarist and songwriter, Jeremy Hector has achieved what many other artistes within this particular genre can only dream of.

His first studio album “Ascension” peaked at number 5 on the Canada’s top 200 iTunes Jazz and number 17 on the United Kingdom charts, garnering him international attention. Hector’s calm composure when being interviewed about his latest achievement speaks to the artiste’s humble character.

The album of 10 original songs, 11 tracks, and one cover of ‘African Lady’ by Grenadian musician, Edson “The Ajamu” Mitchell, has been categorized as being “reminiscent of a Caribbean vacation with lyrical melodies, amazing guitar riffs and intricate arrangements that takes you on a Caribbean Smooth Jazz journey.”

Catchy melodies infused with jazz and soul provide a nostalgic feeling. Hector said, “the songs presented on this album are reflective of my inner experiences as I navigate through my life and times.”

December born, Hector and his twin brother Josh hail from Perdmontemps, St David, and are known musicians; with Josh playing drums. The brothers received their first introduction to music at the age of 7 with classical piano lessons, but when Hector saw St Lucian jazz guitarist, Ronald “Boo” Hinkson perform in Grenada, that really sparked his interest to pursue a career as a musician.

“My parents (Jude and Doreen) brought me to classical piano lessons, so I did that for a few years. I didn’t start playing the guitar until I was 14 and I guess that was the point I really got into it,” Hector reminisced about his formative years. His father Jude, being a guitarist himself, gave Jeremy his first lessons and motivated him to improve.

Like most musicians, he started, and still continues, to play music at church every Sunday; something he credits as a key part of his music development. He attained a Masters in Applied Psychology, while his brother received the same in Counselling Psychology from The UWI Cavehill, Barbados, but he always felt the pull to make a career in music.

“Music has been my career for the last 5 years, it’s all I have done on a full-time basis, so I am not treating it as something on the side or hobby,” he said.

Though Hector’s latest accomplishment has provided him the opportunity to travel abroad to play music with some decorated and accomplished musicians from around the region, he continues to stay focused on creating new moments, as with his latest project Ascension.

One of Hector’s original songs, “Spray Bay” has recently been added to Spotify’s Smooth Jazz Playlist, an online platform for music streaming and downloading. Ascension can also be streamed and purchased via iTunes, Amazon, Google Play and Deezer.

He describes this attention as unimaginable but knows it comes with the territory. “A lot of the attention is on the digital platforms like Spotify and so on. Spotify actually added one of my songs to their jazz playlist which is a big deal and because of that I think it got over 40,000 spins in a week.” It has since moved on to achieve 71,000 spins. “I have been contacted by a host of radio personalities from around the US and different places. People even contacted me from Japan,” Hector said.

He believes this opportunity has definitely motivated him to strive for even greater success. “New music doesn’t stay on the charts for long, especially in the jazz category. If you look at the charts, you will see a whole bunch of people who are referred to as the jazz giants; like Nat King Cole and John Coltrane. So there is a culture in jazz where these songs are immortal, but to be up there with these people I mean that was unimaginable for me coming from where I am coming,” he said.

Ascension was produced by Grenadian Jazz musician, Eddie Bullen who is expected to be one of the leading performers for the upcoming Grenada Music Festival in June.

Hector credits several other jazz musicians for helping shape his musical career including Charles Samuel “Chuck” Loeb, Ronald “Boo” Hinkson, Arturo Tappin and Cecil Bartholomew, but it was just in the last year or so that his producer Eddie Bullen pushed him to even greater heights.

“He has really been a big influence on my musical development. We went from just an acquaintance to friends, to him being like a mentor and support. I don’t think I could have actually done any of this without him,” said Hector.

Hector lamented that although there are other talented Grenadian musicians, their names are not on the international music charts. He hopes that the local industry can develop to grant artistes the exposure needed to catapult their music.

“Interestingly, when the album came out it was number 1 on the all-genre iTunes charts in Grenada. When I went on to look for the other artistes or songs that were on the charts, I didn’t see another Grenadian on the iTunes charts. I saw Bruno Mars, Romaine Virgo a whole bunch of international artistes… and this was telling for me because I think the people really need to get into the business of registering their music, signing up with publishing rights organisations. There is a way to make money other than doing a show,” he said.

Hector plays live at Silversands Grenada on Friday and Saturday nights. He is also looking forward to recording his second studio album. “I think my first project was experimental… I explored a couple of different musical themes searching for my sound. I’m polishing that up for my next album. The first one taught me what themes and feels I gravitate to more in music and they will definitely have a stronger presence in the second album.”

NOW Grenada is not responsible for the opinions, statements or media content presented by contributors. In case of abuse, click here to report.
Tags: ascensioncanadian billboardcurlan campbelleddie bullenjazzjeremy hectorronald Hinksonsilversands grenada
Next Post