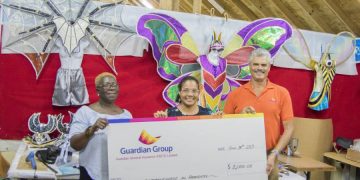 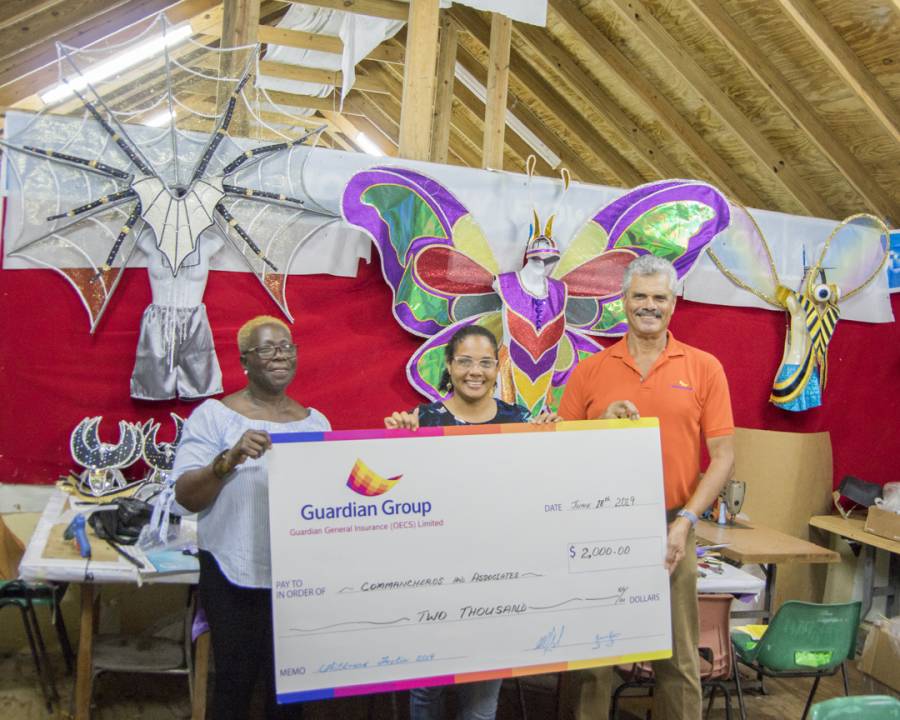 Saturday, 3 August 2019 will see the culmination of months of tireless work when Commancheros and Associates take to the streets with ‘Story Time’ at the Children’s Carnival Frolic event.

For the past decade, Guardian General Insurance (OECS) Ltd. has sponsored the kiddies section of the band and is once again pleased to support this year. Ronald Hughes, Managing Director of Guardian General Insurance (OECS) Limited, visited the mas camp, met with the volunteers and expressed his delight to be part of this venture. He advised, ”As an organisation, and business person, we know that behind the pageantry and time investment, financial investment is imperative for the survival of Mas as we know it. The Commancheros mas camp can be assured of our continuing support.”

This year’s theme was inspired by the world famous and well-loved Anansi the Spider stories. The 8- legged lovable mischief maker, whose wise sayings and resourcefulness allow him to triumph over his much larger enemies. Commenting on the theme, Alyssa Bierzynski, spokesperson for Commancheros, explained ‘The mas camp could not bring the numerous characters in the Anansi stories to life for one carnival event, so we decided to add our own home grown characters to the mix; Mademoiselle Papillon and Winne the Wasp. I will be writing their stories to add to those of Anansi’s. Each story will stand alone but they will also intersect one another’s paths, albeit briefly. One thing is for certain the characters will come to life in a Grenadian context, which reflects our way of life,” she concluded.

Pamela Massell, President of Comancheros Mas Band, indicated, “With the Kiddies Carnival creations we want to make sure that the youngsters get an understanding of the thought processes and creativity which goes into the costumes they will wear; that they see the vision which leads to the final result. The traditional approach of making costumes for mas, allows for creativity and artistry, which will disappear if we don’t treasure it. Every costume is a bespoke hand-made work of art. Each volunteer specialises in a different aspect of the costume, from wire-bending, to gluing fabric and beads etc. We would very much like to share this art form with younger persons, so that it is not a dying art. Teaching the techniques involved is time consuming but we, as volunteers, are willing to go to the schools and interest students in getting involved in such an important part of our culture,” she stated.

The Mas Camp volunteers, who have worked as a team over a number of years, stick to a tough schedule in order to produce approximately 100 hand-made costumes and head pieces, resplendent with beading and feathering, all individually applied. One of the biggest challenges is finding persons who are willing to sacrifice observing and participating in the spectacle of the Carnival to work behind the scenes, as volunteers, up to and throughout the event, to ensure that Commancheros mas players make their mark at Spice Mas.

NOW Grenada is not responsible for the opinions, statements or media content presented by contributors. In case of abuse, click here to report.
Tags: children’s carnival froliccommancheros and associatesguardian general insuranceronald hughes
Next Post