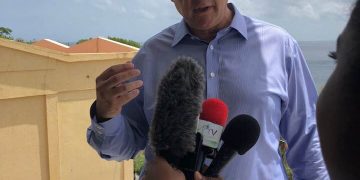 This story was posted 3 years ago
in Business, Travel/Tourism, Video
2 min. read
Share

Almost 18 months after announcing that it would be investing US$58 million in a hotel property, the developer of the Kimpton Kawana Bay Project announced that it has increased its investment which will result in more rooms on the almost 4-acre property overlooking Grand Anse Beach.

“When the project was first announced in January 2017, it was envisaged that 29 rooms would be renovated and 72 rooms plus 45 suites would be constructed. Whilst working with the design team, the project evolved into a far larger undertaking,” said Warren Newfield, who is described as the principal investor. The project is scheduled to welcome its first guest in December 2020.

The hotel will now be 181 rooms and 39 suites and the investment will be over US$100 million.

Newfield told the media during a tour of the construction site that the opening will be in 2 phases. In phase one 85 rooms and 7 suites are expected to be open, while in phase 2, it will be 96 rooms and 32 suites. Originally the hotel was to comprise 110 luxury studio rooms and 45 suites.

Kawana Bay is an approved Citizenship by Investment (CBI) project and funding is through owners’ equity, debt and proceeds from CBI sales. “More than 200 persons have earned citizenship through this project,” said Newfield who is also one of Grenada’s Ambassadors at Large for Investment.

NOW Grenada is not responsible for the opinions, statements or media content presented by contributors. In case of abuse, click here to report.
Tags: citizenship by investmentkawana baykimptonlinda strakerwarren newfield
Next Post

Ministry of Health congratulates Smile GCP for its record success