This story was posted 2 years ago
in Business, Environment, Health, Travel/Tourism
4 min. read 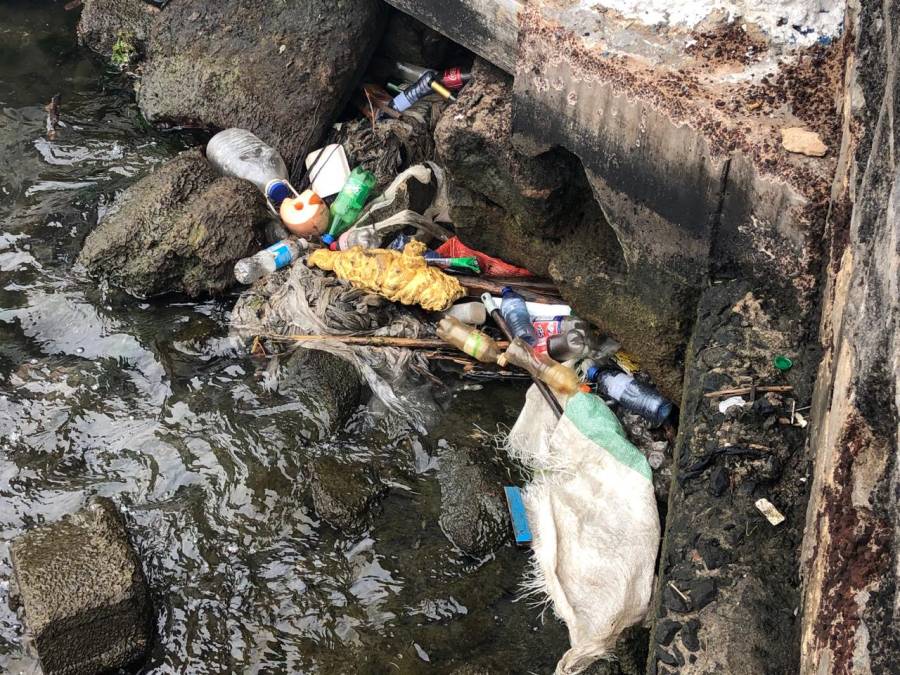 The current accumulates the garbage near Sails restaurant
Share

The scenic harbour in St George’s called The Carenage is described as one of the most captivating harbours in the region. Locally referred to as the Wharf, the horseshoe-shaped harbour has for years been utilised as a loading dock for cargo vessels and fishing trawlers.

Over 28 years, Shereen Holas has lodged many complaints regarding pollution and unsightly garbage dumped in the waters of the Carenage.

Holas is the manager of Sails Restaurant & Bar located opposite the National Water and Sewage Authority (NAWASA) building on the Carenage. Persons wishing to dine at her restaurant have constantly and wrongfully blamed her for improper garbage disposal.

Holas said all the garbage including plastic bags, bottles, dead animals, fish guts and even human faeces that can be seen floating in the water, originate from the cargo vessels and fishing trawlers that berth higher up, and with the help of the current, the pollutants accumulate near the restaurant. The situation has gotten to the point where guests are forced to either leave the restaurant or relocate to another table to avoid the site of the floating garbage.

“This is not an easy subject to address because it affects people directly, but then it comes to me directly and by extension it affects my guests — and of course we talk about our tourism product. Now, what type of tourism product do I have if it is smack in the middle of faeces, garbage or intestines or a cow head? There have been such great oil spills out here that there are guests sitting and cannot consume their food because of the scent of the diesel, and the oil is so strong that guests have to leave.”

Due to the constant sighting of garbage in and around the vicinity of the restaurant, Holas said the restaurant bears the brunt of the blame.

“What hurts is that we get blamed. The restaurant gets a bad name first because that’s where they are sitting and we get asked why aren’t we doing anything. It has gotten progressively worse and everyone is saying yes we will do something about it, but nobody is doing anything.”

As a result, the restaurant owner decided to take matters in her own hands and has her staff clean the water periodically, but this too was unsustainable over time since the arrival of garbage can be unpredicted. “We have tried several things to no avail. We had several meetings with organisations on the Carenage and have started organisations every year with the hope of looking after the Carenage but there are hundreds of groups that have started and failed. It only lasts 2 meetings.”

She argues that while Grenada is getting positive reviews about our tourism product, at the same time the island is also getting negative reviews due to the improper disposal of garbage.

Nature tour operator, Syisha Williams recorded footage with his mobile phone of garbage seen floating in the water near the Financial Complex. Williams believes this problem can be easily addressed if the owners of cargo vessels and fishing trawlers pay a fee to be allowed to berth on the Carenage, and in turn that fee can be used to pay someone to keep the Carenage clean.

“If the trawlers are allowed the privilege of using the Carenage then it is incumbent on them and their responsibility to keep the Carenage clean because that’s where they make money. It can be an easy $25 a week per contribution from each boat which will be $100 a month to put in the pot to pay someone. That will be a really good salary for a young person right now to come and keep the Carenage clean,” he said.

Holas wants the authorities take a more serious approach to this problem which can have far-reaching implications for the island Pure Grenada brand. The Grenada Tourism Authority (GTA) could not be reached for comment.