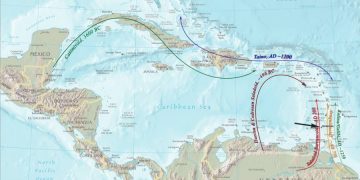 Camáhogne’s Chronology: How long have people lived in Grenada?

Camáhogne’s Chronology: How long have people lived in Grenada?

This story was posted 3 years ago
in Environment, Feature, History
4 min. read 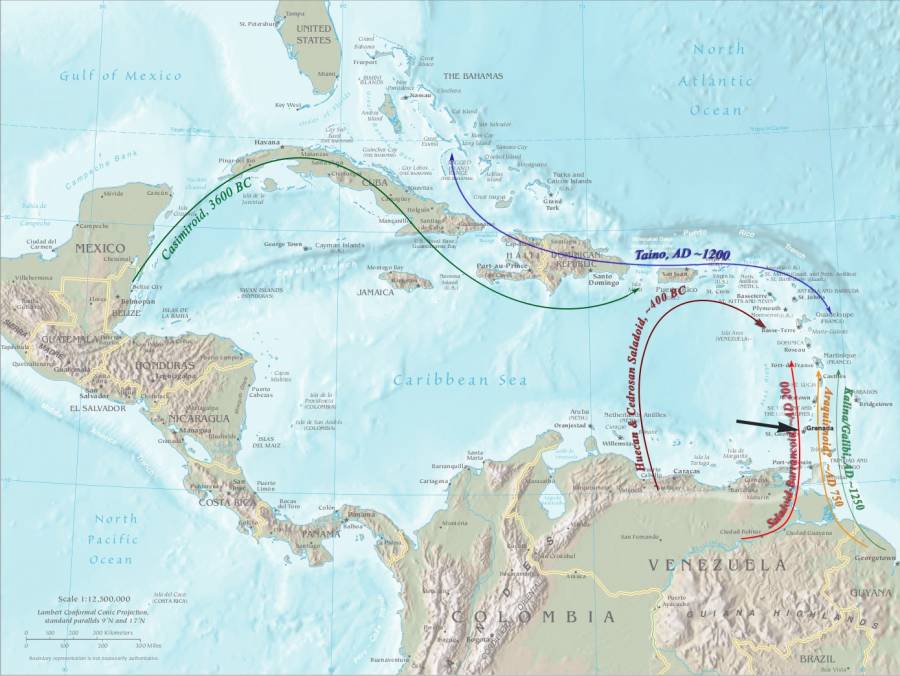 Public access to academic research is often hindered by publisher paywalls and copyright protections. To share his research with the wider public, Jonathan Hanna has offered a summary of his recent paper in The Journal of Anthropological Archaeology, entitled, “Camáhogne’s chronology: The radiocarbon settlement sequence on Grenada, West Indies.”

Most Caribbean schoolchildren learn at least two things about Amerindians: 1) the first people were Arawaks who came from the Orinoco Delta and settled each island successively northward (in a “stepping-stone” pattern), and 2) shortly before Columbus arrived, the “peaceful” Arawaks were wiped out (or pushed farther north) by cannibalistic invaders called the “Caribs.” Sometimes, it is also taught that Archaic hunter-gatherers lived here before the Arawaks.

Many people may be surprised to learn that this narrative is not only erroneous but based solely on European accounts and limited archaeological evidence strictly from the northern Caribbean. Not one word is based on anything from the Windward Islands, much less Grenada.

Since Grenada is the first step in the “stepping-stones” hypothesis, we’ve always assumed people were in Grenada as early as anywhere else, despite lacking evidence. So what is going on here? Numerous Archaic sites have been documented in the northern Caribbean, especially small Leeward Islands like St. Martin and Barbuda. This is true of both the Archaic and the Ceramic (“Arawak”) Ages. Thus, beginning in the 1980s, archaeologists proposed a new model for Caribbean colonisation where Grenada and the Windward Islands were skipped for thousands of years in the Archaic and hundreds of years in the Ceramic periods – settling the northern islands first and then moving southward. A recent paper in the Journal of Anthropological Archaeology offers new evidence (and some refinements) for this “southward route” pattern based on a multi-year survey of Grenada’s pre-Columbian sites.

The earliest direct evidence of humans in Grenada are several cut lambie shells found near the Maurice Bishop airport that date between 1700 –1400 BC. This is later than evidence in the northern islands, but it does suggest some human presence during the Archaic Age (though we have no idea from what direction). That said, these shells have been pushed up by storms and rising seas, so they are not near their original location. Stronger evidence is still needed, though it may be underwater.

Despite this early glimpse, there is no evidence for humans beyond Grenada’s coastline until roughly AD 300, when the first permanent villages appeared. They belonged to the group commonly called “Arawaks” (although we don’t know what they called themselves), but again, they are hundreds of years later than similar sites in the northern islands. There are also only a few of these sites in Grenada, where most of the 87 Amerindian sites documented originate after AD 750 (see previous post here).

Interestingly, evidence for the “Carib Invasion” has also been wanting. Analysis of early historical records and archaeological sites dating to the early French period indicate there were actually two separate Amerindian groups in Grenada: one whom the French called “Caraibe” (Caribs) and another they called “Galibis.” Counterintuitively, the Galibis seem a better match for whom we might label “Caribs” today, based on their pottery and the late timing of their settlements (e.g. Galby Bay was settled after AD 1250), although there is still no evidence of violence or cannibalism.

The “Caraibe” on the other hand were living at sites like Beausejour, Sauteurs Bay, and Pearls – some of the earliest settlements on the island. Thus, the people the French called “Caribs” in Grenada were not recent invaders but descendants of the first settlers! Moreover, there is little evidence for violence among the Caraibe and Galibis—rather, the Galibis were intermarrying and integrating, just as many migrating groups before them. Thus, it would seem that “Carib” was a European label for a highly heterogeneous mix of peoples living in the colonial-era Caribbean, some of whom were descendants of the first human settlers.

So, the story taught in our schools is due for an update (including questions on the CXC!). The southern islands were settled later than the north, and at best, “Carib” is a colonial label for a mix of different peoples (at worst, it’s pure mythology).

But so much remains unknown. We know almost nothing about half of Grenada’s Amerindian sites and only the basic character and chronology for the other half. Many discoveries remain to be made by future (hopefully Grenadian-born) scientists. It is our duty, then, to preserve those things that have survived until now, so that future generations can continue to advance our knowledge of Grenada’s past.

For those interested, you can visit some of Grenada’s Amerindian sites along the Petroglyph Path, which ends at the spectacular Mt. Rich “Carib Stone” Interpretation Centre. And please remember that it is illegal to remove artefacts from an archaeological site without explicit permission from the Ministry of Culture. If you find artefacts, please leave them in place and alert the National Museum so they can properly document the site.

For those who wish to read the original paper, the author can be emailed at [email protected] for a copy; there are also 50 free downloads available via this link: https://authors.elsevier.com/a/1ZIeL_6L9Zn6tF

NOW Grenada is not responsible for the opinions, statements or media content presented by contributors. In case of abuse, click here to report.
Tags: amerindianarawakarchaeologycaribchronologyjonathan hannapetroglyph
Next Post

A Different View… Is your culture eating your strategy?