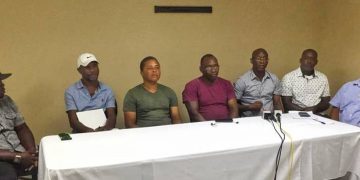 This story was posted 2 years ago
in General News
5 min. read

What will the ramifications be for some bus operators if the government continues to move ahead with the introduction of a new bus route from Grenville to Grand Anse?

This is one question which members of the Grand Anse Bus Owners Association (GBOA) are asking following the announcement made by Trade and Industry Minister Oliver Joseph on Tuesday.

Minister Joseph said amendments to the Road Traffic Route Regulation make this move possible, and he also indicated that Zone 4 route which goes through St Paul’s will also be extended past Beaton to Red Gate in St David.

In addressing members of the media, Minister Joseph stated the rationale behind government’s decision to introduce such a route. “I am particularly pleased as a representative from St David with this route, because [there are] a lot of people from St David who come to work in Grand Anse, but have to take a bus and go to the terminal, and then take the next bus and go to Grand Anse. So now they can come down from Grenville, come through Woodlands, Grand Anse Valley.”

Minister Joseph said the next step is to have the amendment to the Road Traffic Route Regulation gazetted and the issuance of the brown sticker, and to assign a different route number for buses that will eventually be plying that route.

Members of the GBOA lamented the complications that this new route will create for operators in the south of the island, since the newly proposed route will terminate at ‘Wall Street’ which is situated in the centre of the Grand Anse route.

Although the association has been in talks with the authorities regarding the introduction of this new bus route for over 5 months, the association believes government is hastily moving ahead with their plans without thinking of the ramifications involved for operators plying that same route.

An emergency press conference was held on Wednesday morning at the conference room of the Venus Restaurant to express their grievance.

Among them was newly elected GBOA President Derek McKenzie, who had several questions. With more than 290 buses plying the Grand Anse route, McKenzie is concerned that it appears that the government has not conducted any study to justify establishing the additional bus route. He fears this will (i) create further traffic congestion in the south that is already being experienced by motorists, and (ii) create competition for passengers in an already scarce environment.

McKenzie questioned what warrants a route from Grenville; what study was conducted that will indicate the need for such a route and what will be the bus fare for a new route. “We had no say in the implementation of this and what we have learned is that this will come on stream shortly. I think the most interesting question is why create more traffic congestion in an area that is already congested. If you look at Grand Anse in the morning and evening, it is congested, especially the Grand Anse Valley roundabout by the entrance to L’anse aux Épines,” he said.

Echoing similar sentiments was Abraham Munro, President of the Grenville Bus Association. He said buses plying the Zone 6 from Grenville to St George’s via Grand Etang will also see the negative effect of this new additional route.

“This new route will affect the Grand Anse buses, and so far it will affect us even more than them, because remember the working population is in Grand Anse, which makes up the majority of our passengers from Grenville, so if there is a route going straight on to Grand Anse from the bottom side, then we will have no work.”

Brathwaite asks that government reconsider the implementation of this new bus route and continue dialogue with the stakeholders involved. “With respect to the minister and his colleagues, we believe that has been done with goodwill as they seek to make our transport system a more viable one. We do however wish to ask that in the making of these decisions that all options are explored and dialogue is done in due course with all stakeholders. We are therefore asking that this decision be reconsidered in a new round of discussions that we do believe in light of the fact that within our associations we have a pool of over 290 buses which ply the route on a daily basis, is sufficient to fill any void at the moment.”

Among government’s rationale behind the inclusion of the new bus route was to (i) alleviate the congestion at the Otway Gas Station where buses plying the St David route, Woodlands, and Grand Anse, converge to collect passengers and, (ii) accommodate passengers awaiting transportation at the Woodlands junction.

When asked what the association will do if government is bent on the implementing this new route, the association stated that they don’t expect the government to go through with their plans after hearing the grievances expressed, but if that’s not the case they are prepared to take further action.

The association has called a general meeting this Sunday at 5 pm at Otway House to discuss the way forward.